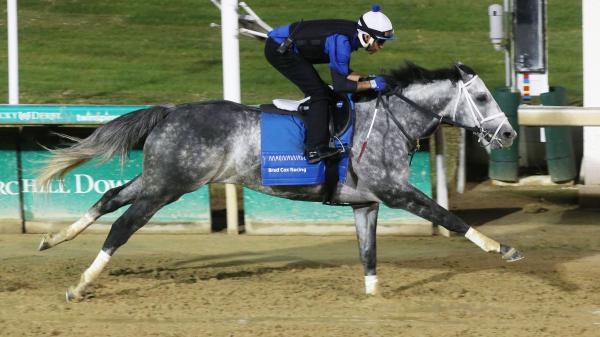 Can Anyone Catch Knicks Go in Breeders’ Cup Classic?

The 38th running of the $6 million, Grade 1 Longines Breeders’ Cup Classic set for Saturday at Del Mar drew a field of nine, including 2021 Kentucky Derby Presented by Woodford Reserve winner Medina Spirit, who enters the race off a win last month in the Grade 2 Awesome Again Stakes. Hot Rod Charlie and Essential Quality, who finished third and fourth in the Derby, respectively, have both come a long way since then as Hot Rod Charlie won the Grade 1 Pennsylvania Derby and Essential Quality won the Grade 1 Runhappy Travers Stakes in their most recent races. Another with top credentials is Art Collector, winner of the Grade 1 Woodward Stakes last month, which was his third straight stakes victory. Then there’s Max Player, riding a two-race winning streak at the 1 ¼-mile Classic distance consisting of the Grade 2 Suburban Stakes in July followed by the Grade 1 Jockey Club Gold Cup in September.

The aforementioned five horses are likely to be chasing Knicks Go from the outset. Riding a three-race winning streak including the Grade 1 Whitney Stakes, Knicks Go is a 5-year-old with field high earnings of $5.5 million and is unlikely to yield to any of his opponents from the moment the gates open. Stilleto Boy earned the biggest stakes win of his career when winning the Iowa Derby in July but has been beaten soundly by Medina Spirit in two straight races. Similarly, Express Train, who won the Grade 2 San Diego Handicap in July at Del Mar, finished seven lengths behind Medina Spirit in the Awesome Again. Tripoli rounds out the field. Winner of the Grade 1 TVG Pacific Classic in August, he was beaten 8 ¼ lengths while never threatening in the Awesome Again last month.

Knicks Go has an edge over the other eight horses in this year’s Breeders’ Cup Classic because of his running style. Knicks Go has had the lead from the start in his last eight races in the U.S., resulting in seven wins. As such, the trainers of the other eight horses can strategize all they want about how the race can be won by their charges, but one thing is certain and that is if any of the other entrants try to fight for the early lead with Knicks Go they are likely to be severely compromising their own chances of success. On the other hand, if Knicks Go is left to run unabated on the front end, he is likely to get into a steady rhythm and will not allow any other horse to get within a length of him in the last quarter of a mile. Since returning from a trip halfway across the world to compete in the Saudi Cup in February and being short of 100% when fourth in the Hill ‘n’ Dale Metropolitan Handicap in June, Knicks Go has reeled off three straight impressive victories with Equibase Speed Figures of 118, 117 and 115. Jockey Joel Rosario, who has been in the saddle aboard Knicks Go for his last six wins, fits the horse perfectly by allowing him to get into a fluid stride and do his thing – which once again in the Breeders’ Cup Classic should be to control the tempo on fast fractions from the start and never look back.

Art Collector and Max Player are both likely to be taking up stalking positions behind Knicks Go shortly after the start as that has been their successful strategy in winning key Classic prep races this summer and fall. Art Collector has won three straight since moving to the care of Hall of Fame trainer Bill Mott last summer, with each effort better than the rest. After winning the Alydar Stakes in August with a 110 figure, Art Collector improved to 115 in the Charles Town Classic and then to a career-best 120-figure effort in the Woodward Stakes last month. Although he led from start to finish in two of those three races, in the Charles Town Classic Art Collector stalked the early leader in second before forging to the front in the last eighth of a mile. Therefore, if Knicks Go can be passed in the final stages of this race, Art Collector is one of those who may be able to go by the early leader and post the upset.

Max Player has also run career-best races in his most recent starts. After returning from an 11th-place finish in the Saudi Cup, Max Player finished a poor sixth in the Pimlico Special Match Series Stakes in May but rebounded nicely to win the Suburban Stakes at the mile-and-a-quarter distance of the Classic in July. He earned a career-best 113 figure in the Suburban, and then duplicated it when he won the Jockey Club Gold Cup in September. In both races, Max Player sat in second in the early stages then pounced on the leader before drawing off, doing so by four lengths in the Jockey Club Gold Cup. Jockey Ricardo Santana Jr. was aboard Max Player in both of those wins and will ride him again in the Classic.

Essential Quality is 8-for-9 in his career, his lone defeat coming when a troubled fourth in the Kentucky Derby. Although beaten just one length by Medina Spirit for the win and just a head by Hot Rod Charlie for third place, Essential Quality proved he belonged with the best of his age group in the Derby. He built on that effort by winning the Belmont Stakes Presented by NYRA Bets five weeks later and then the Jim Dandy Stakes at the end of July, earning very similar Equibase Speed Figures of 109 and 107, respectively. Tackling 1 ¼ miles in the Travers Stakes in August, Essential Quality once again ran professionally while battling head and head with Midnight Bourbon for the last eighth of a mile, coming out on top by a neck and earning a 109 figure. That 109 figure might be the issue with this talented colt in the Classic. Not only is Essential Quality coming back from the longest period of rest of any horse in the field (more than two months), he also has not improved his figures throughout his 3-year-old campaign. Significant improvement is needed to get to the 118- to 120-figure threshold it is going to take to win this race.

Hot Rod Charlie ran the best race of his career when victorious in the Pennsylvania Derby near the end of September, earning a 120 figure in the process while easily defeating Midnight Bourbon, who had battled down to the wire with Essential Quality one month earlier. On the other hand, Hot Rod Charlie puts blinkers back on for the Classic and it appears to me that when wearing blinkers for six straight races from October of last year through the Belmont Stakes last summer he either ran evenly in the last eighth of a mile or lost ground to the winner in the final stages. The first of two examples of that came when he was only a head behind Essential Quality in last year’s TVG Breeders’ Cup Juvenile Presented by TAA entering the stretch before ending up three-quarters of a length behind at the finish, and the more recent one occurred was when he was a head behind Essential Quality in the Belmont Stakes with an eighth of a mile to run but 1 ¼ lengths behind him at the end.

Next we come to Kentucky Derby winner Medina Spirit. Never worse than third in nine career starts, Medina Spirit ran the best race of his career in the Derby with a 110 figure. After regressing to a much lower 95 figure effort when third in the Preakness Stakes off of two weeks rest, Medina Spirit took three months off and won the non-graded Shared Belief Stakes at Del Mar in August with a 105 figure. After that, he improved to win the Awesome Again Stakes last month and cycled back to the 110 figure he earned in the Derby. The problem Medina Spirit may have in this year’s Classic is he has taken the early lead in his last four races, beginning with the Derby. Medina Spirit is unlikely to run as fast in the early stages as Knicks Go, and that means he will be asked to take up a stalking position in the Classic. If his previous efforts rating off the pace are any indication, Medina Spirit simply isn’t as good from that position as he is on the lead. For example, when he stalked in fourth during the early stages of the Runhappy Santa Anita Derby in April, Medina Spirit could only manage to move up to second at the end and was beaten by 4 ¼ lengths. The same thing happened in his race prior to the Santa Anita Derby when he rated in second early on and stayed in that spot while eight lengths behind winner Life Is Good in the San Felipe Stakes.

Tripoli won the 1 ¼-mile Pacific Classic Stakes in August with a 109 figure, and he earned 106 and 109 figures previous to that. Then he regressed significantly in the Awesome Again when he finished fourth with a 98 figure. As such, it does not appear likely that he can contend with the top horses in this race. Similarly, Express Train ran his best race of 2021 when winning the San Diego Handicap in July with a 107 figure, but as he is entering this race off sixth- and third-place finishes with 95 and 99 figures he has a tall order ahead of him to be competitive. Stilleto Boy finished second by five lengths to Medina Spirit in the Awesome Again with a 102 figure, and he ran the best race of his career with a 106 figure in the Iowa Derby in July, but he has never run as far as he will in the Classic and appears to be up against it in terms of a top-three placing.

You can get Ellis’ full card detailed analysis and betting recommendations for all the races at Del Mar on Breeders’ Cup Weekend (Friday Nov. 5 and Saturday Nov. 6), at Equibase.com.