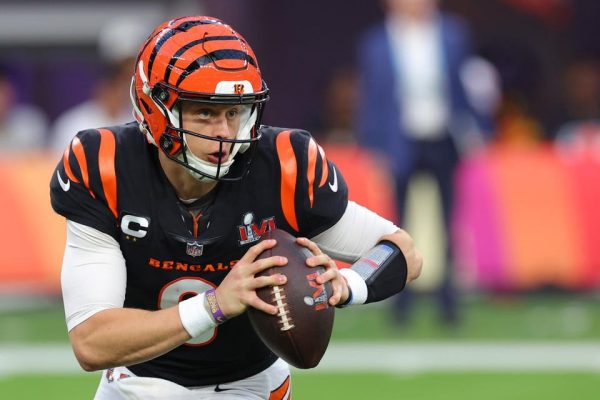 Can Cincinnati Make It Back to the Super Bowl?

It might have been a year or two ahead of schedule, but Cincinnati Bengals head coach Zac Taylor led his team to the Super Bowl last year. It was the franchise’s best season in decades. The Bengals went 10-7 in the regular season and then shocked the NFL in the playoffs beating top-seeded Tennessee, and Super Bowl favorite Kansas City in the AFC title game.

It was the Bengals first AFC championship since 1988. Cincy lost by three to Super Bowl champion Los Angeles and did so with some glaring weaknesses. Can Cincinnati make it back to the Super Bowl this season?

The offensive line was probably Cincy’s biggest weakness in 2021. The Bengals gave up the third-most sacks in the NFL. A weak O-line is one of the reasons why QB Joe Burrow suffered a knee injury in his rookie season. There is no way the Bengals can afford another injury to their star quarterback.

To address their concerns, Cincinnati went out in free agency and filled some holes. Former New England C Ted Karras and former Tampa Bay G Alex Cappa are now members of the Bengals. They instantly had an impact as the Bengals are projected to have the eighth-best offensive line in the league.

Last season, Burrow threw for 4,611 yards and 34 touchdowns. He did it with one of the worst offensive lines in football. Think of what he can do with an improved offensive front.

The addition of Cappa and Karras will not only help Burrow, but they will also help the Cincy running game. The Bengals finished 23rd in the league in rushing yards per game, but RB Joe Mixon still had a 1,000-yard season (1,205 yard, 13 TDs). It was Mixon’s third 1,000-yard season in his five-year NFL career.

Mixon has become a serious receiving threat too. He had 42 receptions and three touchdowns last season. His work in both the running and passing game only help Burrow. Don’t forget, the Bengals had two 1,000-yard receivers too – Ja’Marr Chase (1,455) and Tee Higgins (1,091).

Cincinnati’s defense improved as the year went along in 2021. They wound up fifth against the run (102.5 ypg), but the pass defense was not good. Cincy allowed 248.4 yards per game and finished 26th in the NFL. One area where the Bengals were solid on defense was in rushing the passer. The Bengals had 42 sacks last year which was tied for 11th in the NFL.

Taylor and the Bengals addressed the pass defense in the draft. They took Michigan safety Dax Hill in the first round and then Nebraska CB Cam Taylor-Britt in the second. DT Zachary Carter and S Tycen Anderson were also Bengals draft picks as they look to get better defending the pass.

The Bengals will play in the second-toughest (AFC West is 1st) division in the NFL. That means six games total against Pittsburgh, Baltimore, and Cleveland. The rest of the schedule is favorable though as Cincy plays the AFC East and crosses over to face all four teams in the NFC East.

That gives the Bengals eight very winnable games. Cincinnati is actually favored to win the AFC North. Division play and those eight games will likely determine the Bengals fate in 2022.

So, back to the question. Can the Bengals make it back to the Super Bowl this season? There is no question that they can. They have one of the best young quarterback in the league in Burrow. The offensive line will be remarkably better. The running game will be better and that only helps Burrow and the passing game.

If the defense fixes its issues in the passing game, this is a Bengals team that will not surprise anyone this year when they make it back to the Super Bowl. The Bengals are +2000 to win it all in Super Bowl 57 at BetUS.com. There is value in this price as we have estimated the Bengals should be at about +1400

We are LIVE with @injuryexpert running through the latest NFL Week 14 injury reports. https://twitter.com/i/broadcasts/1PlKQpobpMdxE

One of the most FUN college football games all season is the ONLY game happening tomorrow...

It's Army vs Navy! @roadtocfb breaks it down! #ArmyNavy #GoArmy #GoNavy

More history about the game and analysis in full episode: https://www.youtube.com/watch?v=bQ1DU4u_D_U