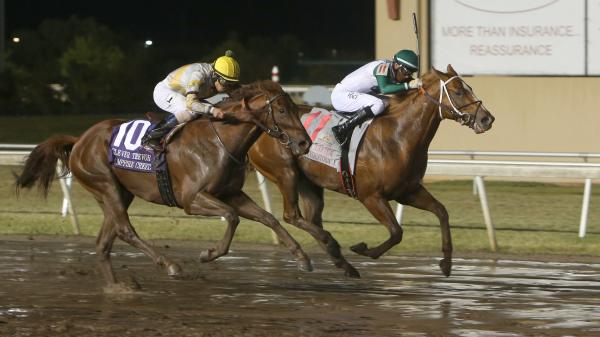 Can Echo Again’s Speed Carry Him to Victory in Remington Springboard Mile?

The $200,000 Remington Springboard Mile Stakes is a traditional December showcase for 2-year-olds who are just starting out on the Road to the Kentucky Derby, with points to the first five finishers. Those Remington Park qualifying points could become critical next spring in determining who can run in the Kentucky Derby Presented by Woodford Reserve if their connections choose to explore that path.

Trainer Steve Asmussen, who saddled the winner of this race three times in the past eight years (2014, 2018 and 2019), saddles a pair in Echo Again and Money Run, the former entering the race after fading to seventh of nine in the Grade 3 Iroquois Stakes in his most recent start but a winner of his only other race. Money Run fared a bit better in his most recent start as compared with his stablemate as he was third at this distance four weeks ago after a fifth-place effort in the Clever Trevor Stakes. Wildatlanticstorm won that race, with Campfire Creed a nose behind in second, and they are hoping to use the Clever Trevor as a prep to winning this race the same way Long Range Toddy did for Asmussen in 2018. Ghost Hero won the Don C. McNeill Stakes for horses bred in Oklahoma last month, but that race has not shown to be historically significant to success in the Springboard Mile. Giant Mischief won a highly rated race at a shorter distance last month at Churchill Downs and tries stakes competition for the first time. Lil Sweet Thang and American Outlaw were separated by a length when first and second, respectively, at this distance last month in an allowance race and both will attempt to make their mark in the division by improving to this level. Gunflash won at first asking in a six-furlong sprint on this track in November, so he is being asked a couple of significant questions in terms of class and distance.

Echo Again was extremely impressive in his career debut this summer at Saratoga when leading as soon as he broke from the gate and coasting around the track in hand to win by 6 3/4 lengths. That effort earned a very strong 91 Equibase Speed Figure, which I’m sure his connections intended him to improve upon when sent to post as the overwhelming 3-5 favorite in the Grade 3 Iroquois Stakes one month later. However, after breaking a bit poorly to start fifth of nine, the colt moved up quickly to lead around the time a half-mile had been completed, but expended too much energy and faded to seventh. Recently, Echo Again has been in steady training for Asmussen, who won this race in 2019 and also in 2014 and 2018. There is little doubt the reason Echo Again ran poorly in the Iroquois had nothing to do with breeding and more about how the race was run, as he’s by sensational sire Gun Runner out of a mare who produced 2020 Pegasus Stakes winner Pneumatic. Getting the rail for this year’s Springboard Mile, it is highly likely jockey Ricardo Santana Jr. will use the colt’s exceptional early speed to establish the lead easily and from there get him to relax and hold off all comers to win.

Giant Mischief earned by far the best Equibase Speed Figure in the field, 101, when winning a seven-furlong race last month in the second start of his career. He also won his debut in September, with a 69 figure, so the improvement was striking. In that win on Nov. 4, Giant Mischief made the lead with an eighth of a mile to go and had to fight nearly every step of the way until near the finish line when asserting himself by three-quarters of a length. The horse he beat for second, Arabian Lion, is very likely to be favored in the Los Alamitos Futurity in California this weekend. Being a son of Into Mischief, there’s little doubt he will run as well or better around two turns and trainer Brad Cox continues to keep his horses in top form, having won back-to-back 26% of the time over the last 12 months.

Campfire Creed and Wildatlanticstorm deserve some mention, particularly for how well they ran when separated by a nose on Oct. 28 in the Clever Trevor Stakes. Wildatlanticstorm prevailed that day after both horses battled head and head for the last eighth of a mile. Neither has run around two turns yet and but the 91 figure both earned can be improved upon, particularly as the race has turned out to be very productive. The third-place finisher, who was seven lengths in arrears of these two, improved by four points to finish second in a stakes race, while the fourth- and sixth-place finishers both improved mightily to win their next starts, each bettering their speed figures by nine points. If the same improvement were to happen to either of these colts, that would put their effort in the 100 range, well within scope of the 101 figure Giant Mischief earned in his last race.