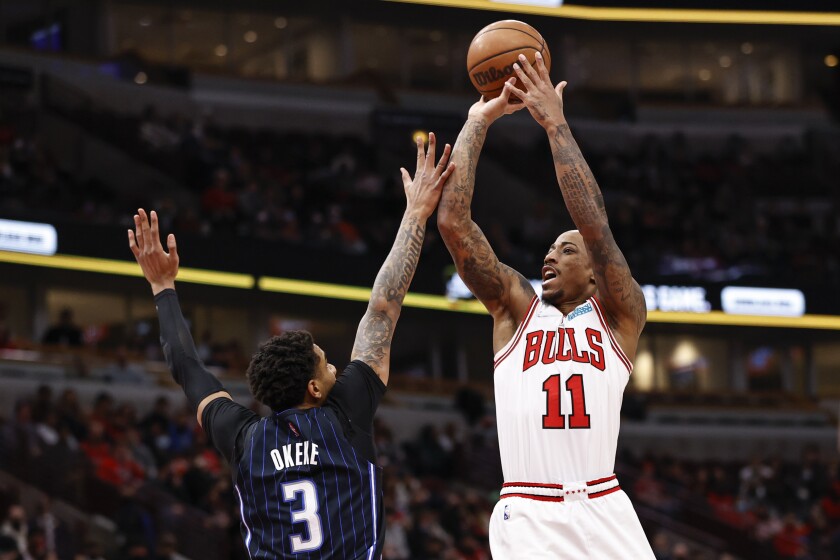 Can the Chicago Bulls Win the Eastern Conference in 2022?

As the 2021-22 NBA season moves closer to the All-Star break, the Chicago Bulls are perched in second place in the Eastern Conference. The Bulls own a record of 36-21 and they are exactly one game behind first place Miami and one game ahead of both Cleveland and Milwaukee. In fact, each of the top eight teams in the East is within 2.5 games of the team ahead of them. Sixth-place Boston is just 4.5 games out of first.

Absolutely. It’s been done before. For those that have a short memory, recall last year’s Phoenix Suns. The Suns had finished 10th in the Western Conference the previous year. Phoenix made some moves, most notably the acquisition of veteran guard Chris Paul. That helped them go from 10th one season all the way to Western Conference champions the next.

Don’t forget the previous year either. The 2020 NBA Finals was made up of two teams that had finished in 10th-place in their respective conference in 2019. The Lakers would add LeBron James and Anthony Davis in successive seasons which helped Los Angeles win the NBA title in 2020. The team they defeated – Miami – had finished 10th in the East. The Heat added Jimmy Butler and wound up playing for an NBA championship.

Chicago added scorer Zach LaVine in 2017. Last offseason, they went out and acquired DeMar DeRozan from San Antonio. The pair has been among the top 20 scorers in the NBA for most of the season. DeRozan has been on fire recently with six straight 30-points-plus games and has moved into a tie for fourth-place in the NBA in scoring (27.7 ppg). Over a five-game stretch from Feb. 4 to Feb. 12, DeRozan averaged over 38 points per game.

LaVine scores 24.6 points per game, which ranks 13th in the league. If the Bulls have an issue, it will be health. LaVine has had a sore knee and recently missed a game with a back injury. He, and the rest of the Bulls, needs to stay healthy.

To understand the importance of DeRozan and LaVine, consider this. Of all NBA players with at least 100 isolation possessions, the most efficient player in the league is DeRozan. LaVine ranks fourth. These two can carry the Bulls to the top spot. That’s enough for bettors to give serious consideration to the Bulls at +1100 to win the conference.

The Bulls also went this past offseason and made a few more key additions. Chicago added a pair of guards in Lonzo Ball and Alex Caruso that made the Bulls very good defensively. Ball was also averaging 13.0 points and 5.1 assists per while Caruso was scoring 8.4 and adding 3.9 assists per game. Unfortunately, both Ball and Caruso are out of the Bulls lineup right now due to injury.

Chicago drafted Illinois guard Ayo Dosunmu to add to the mix and his contributions have been welcomed with Ball and Caruso out. Dosunmu is averaging 8.0 points a game this season, but he has been playing more minutes lately. He has hit double figures in five of his last seven appearances.

The Bulls are also a threat to win the Central Division though defending NBA champ Milwaukee is given -125 odds to do so. The Bulls and Bucks have played just once so far this season – Milwaukee won 94-90 – and they will meet three more times.

It all comes down to one thing – injuries. Injuries have claimed some of the best laid plans of NBA teams. Ball was said to be out six to eight weeks when he had surgery to repair a torn meniscus in his left knee. Caruso is also listed as out indefinitely with a wrist injury. LaVine has missed games too.

The bottom line is that if Chicago can stay healthy they have the nucleus to win the East. They should avoid the Bucks in an opening round series, but the team they really need to avoid early could be Philadelphia. The Bulls don’t have an answer for Joel Embiid – other than DeRozan going off – and have lost three times to the Sixers already this season.

2022-02-18
Previous Post: Joey Mulinaro Has ‘A Stake in Stardom’ But Who is This New Owner?
Next Post: IGT Expands Washington Foothold Through Kalispel Tribe Deal