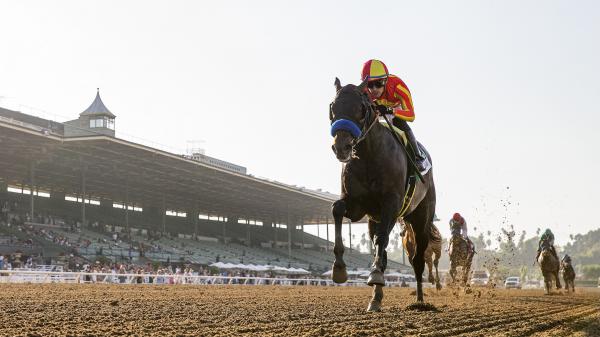 The nearest a horse not trained by Bob Baffert could get in the Oct. 8 American Pharoah Stakes at Santa Anita Park was 24 1/4 lengths behind undefeated winner Cave Rock. That’s because all four of the Baffert runners finished ahead of the other four in the race, with daylight between every one of them.

“I don’t remember finishing one through four [in a stakes] — I think it’s the first time in a Grade 1 definitely,” Baffert said.

Bettors felt Baffert had the field surrounded, making Cave Rock, winner of the Runhappy Del Mar Futurity, the 2-5 favorite. They sent off Hejazi as the second choice at 2.90-1 and National Treasure 9.80-1. Only Skinner, third to Cave Rock in the Del Mar Futurity, was given any chance against the Baffert quartet, at 13.80-1 over Gandolfini at 17.30-1.

Despite Baffert’s accomplishment of finishing one through four with his trainees, Cave Rock dominated the American Pharoah from start to finish. The victory also gives the colt a “Win and You’re In” berth to the FanDuel Breeders’ Cup Juvenile. He will bring to that race a 3-for-3 record and combined winning margin of 16 1/2 lengths, which probably will earn him the role of favorite.

In the American Pharoah under jockey Juan Hernandez, who piloted Cave Rock in both of his previous starts, the colt broke in third and quickly took command.

“He broke really good, very nice,” Hernandez said. “At first, he was kind of looking around a little bit around the turn.”

National Treasure stayed about 1 1/2 lengths behind his stablemate through the early going. Cave Rock set quarter-mile fractions of :22.96, :46.82, and 1:11.07 while the other Baffert runners jockeyed for position behind him. Hejazi raced outside of National Treasure, and Gandolfini, who broke from the rail, remained on the inside.

The early 1 1/2-length margin became 2 1/2 lengths after six furlongs, and then Cave Rock’s lead continued to increase. He galloped across the finish line easily. His winning time of 1:43.05 was the fastest clocking in the race since American Pharoah won in 1:41.95 in 2014 when the race was named the FrontRunner. Baffert trained American Pharoah, who captured the Triple Crown the following year.

Baffert trains Cave Rock for the partnership of Mike Pegram, Karl Watson, and Paul Weitman, the leading owners at the Del Mar summer meeting. Pegram, Watson, and Weitman are off to a fantastic start at Santa Anita as well, having won the Awesome Again Stakes with Defunded, Zenyatta Stakes with Midnight Memories, and Speakeasy Stakes with Speed Boat Beach on opening weekend.

Less than a month after rallying to a head score in the Grade TVG Del Mar Debutante Stakes, And Tell Me Nolies uncorked another strong finish to take the $200,000 Chandelier Stakes. This time, the Peter Miller-trained filly snared the lead at the top of the lane to outlast the rush of Uncontrollable at the wire.

“She got a little tired late, but she knows what to do,” Jockey Ramon Vazquez said of And Tell Me Nolies. He has been aboard the filly in every one of her four career starts, “She is getting better and better after every race.  She can handle the distance. I think she is going to be a superstar later.”

After echoing her Del Mar Debutante stumble at the break in Saturday’s race, And Tell Me Nolies raced comfortably in fifth down the backstretch with one horse beat past the half-mile in :46.71. The pace set by longshot Naughty Lottie and Del Mar Debutante third-place finisher Ice Dancing then began to subside as the pacesetters gave away around the far turn after six furlongs in 1:11.45.

“[And Tell Me Nolies] stumbled pretty good leaving [the gate] and I wasn’t too thrilled with that, but Ramon didn’t panic,” Miller said. “He let her get up and get into her stride, and that was the key.”

Circling three wide into bend, And Tell Me Nolies charged past the tiring front-runners under steady encouragement from Vasquez and sprinted to the wire, fending off Uncontrollable by three-quarters of a length.—Molly Rollins