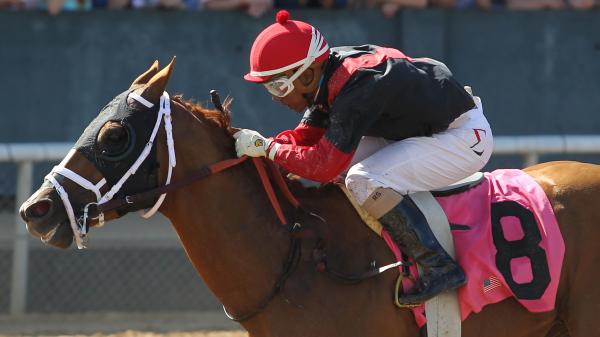 Celebrating a Champion and Fan Favorite: Whitmore Day at Oaklawn Set for March 19

Whitmore, one of the most popular and successful horses in Oaklawn Park’s history, will be honored by the track Saturday, March 19, with Whitmore Day. Much of Whitmore’s best work came at Oaklawn, where he compiled a 9-6-1 record from 16 starts as he developed into the country’s champion male sprinter of 2020 and the winner of that year’s Breeders’ Cup Sprint at Keeneland.

Saturday’s festivities include the inaugural $200,000, Grade 3 Whitmore Stakes, an appearance by the champion, Whitmore t-shirts and commemorative baseball cards for the first 2,000 fans. The $500,000, Grade 3 Essex Handicap shares the card on this blockbuster day of racing, which will be televised on both FS2 and TVG – check the schedule below.

The Whitmore Stakes was formerly known as the Hot Springs Stakes, and Whitmore won the six-furlong race four times. Oaklawn announced the name change last September shortly after the champion retired. Whitmore also won the Count Fleet Sprint Handicap three times for a total of seven Oaklawn stakes wins, a record he shares with Swift Ruler, a local star during the 1960s.

In another move to honor Whitmore, Oaklawn’s Count Fleet barn, which was Whitmore’s winter home for six years, was renamed the Whitmore barn.

As a foal born at War Horse Place near Lexington, Ky., Whitmore was nicknamed Diablo (Spanish for devil) within a week after his birth. He was known for his lively and independent personality.

“He was always mischievous and stubborn,” Rachel Holden, manager at War Horse, said. “He was never mean. We know he is still quirky at the track. Quirky and stubborn.”

Trainer Ron Moquett purchased the chestnut colt from his breeder. The horse’s natural athletic ability reminded him of a basketball teammate of his from high school, Wilbur Whitmore. He was a four-sport letterman at Pocola High in Pocola, Okla., which straddles the Arkansas-Oklahoma border by Fort Smith.

Moquett talked to Wilbur Whitmore for the first time in over a decade and asked if he could name the horse after him. Robert LaPenta and Sol Kumin’s Head of Plains Partners eventually joined Moquett’s Southern Springs Stable in ownership.

Whitmore was a noted bad actor at age 2 and was gelded before his first start at Churchill Downs, which he won. Although he mellowed with age, Whitmore would kick his rear legs before loading into the starting gate for some races.

As a 3-year old, he placed in the top three in Oaklawn’s three main Kentucky Derby prep races and made his next start in the 2016 Kentucky Derby. Wilbur Whitmore, his wife, and his mother and father attended, but his namesake finished a disappointing 19th.

After the Kentucky Derby, Moquett gave Whitmore an extended break and reimagined him as a sprinter. The shorter distance obviously suited him and he won his next five races, including the first of his three Count Fleet scores in 2017. His other top wins included the 2017 Grade 2 Stoll Keenon Ogden Phoenix Stakes at Keeneland and 2018 Grade 1 Forego Stakes at Saratoga. He finished with a career record of 15-13-5 in 43 starts and earnings of $4,502,350.

Since retiring, Whitmore is taking steps toward possible second careers as a stable pony for Moquett, a dressage horse or a jumper. Moquett’s wife and assistant Laura, who was Whitmore’s regular exercise rider, has been working with him.

“Right now it is too early to tell what his next career will be,” Moquett said. “He will decide his next move when he is ready.”

Earlier this week, Whitmore moved back into his former barn that is now named for him. During the first 48 hours he was back on Oaklawn’s grounds, the champ received many visitors.

“How cool is it for him to walk into the barn that is named after him during the week of the race that is named for him, and so people come over and tell him how awesome he is. That’s what we live for,” Moquett said. “I get that people made money betting on Whitmore, but that’s not the deal. People aren’t writing me letters and texting me and wanting to feed him peppermints because they made $4.60 when he won. They’re doing that because of the respect and love they have for this horse. That gets me right in the good spot.”

Whitmore has been invited to lead the post parade for the Whitmore Stakes. Moquett says the champ will lead if he wants to, and it will be a no-pressure choice made by him. Earlier this week, Moquett said he felt optimistic about it happening, but he wanted to be cautious. Wilbur Whitmore also plans to be in attendance.

Moquett has been a trainer since 1996.

“Oaklawn has always been my home track and it was Whitmore’s home track, so it’s a huge honor to have a stakes race named for him here,” he said. “He was a hard-knocking horse that a lot of people could easily root for whether they put a bet on him or not.”