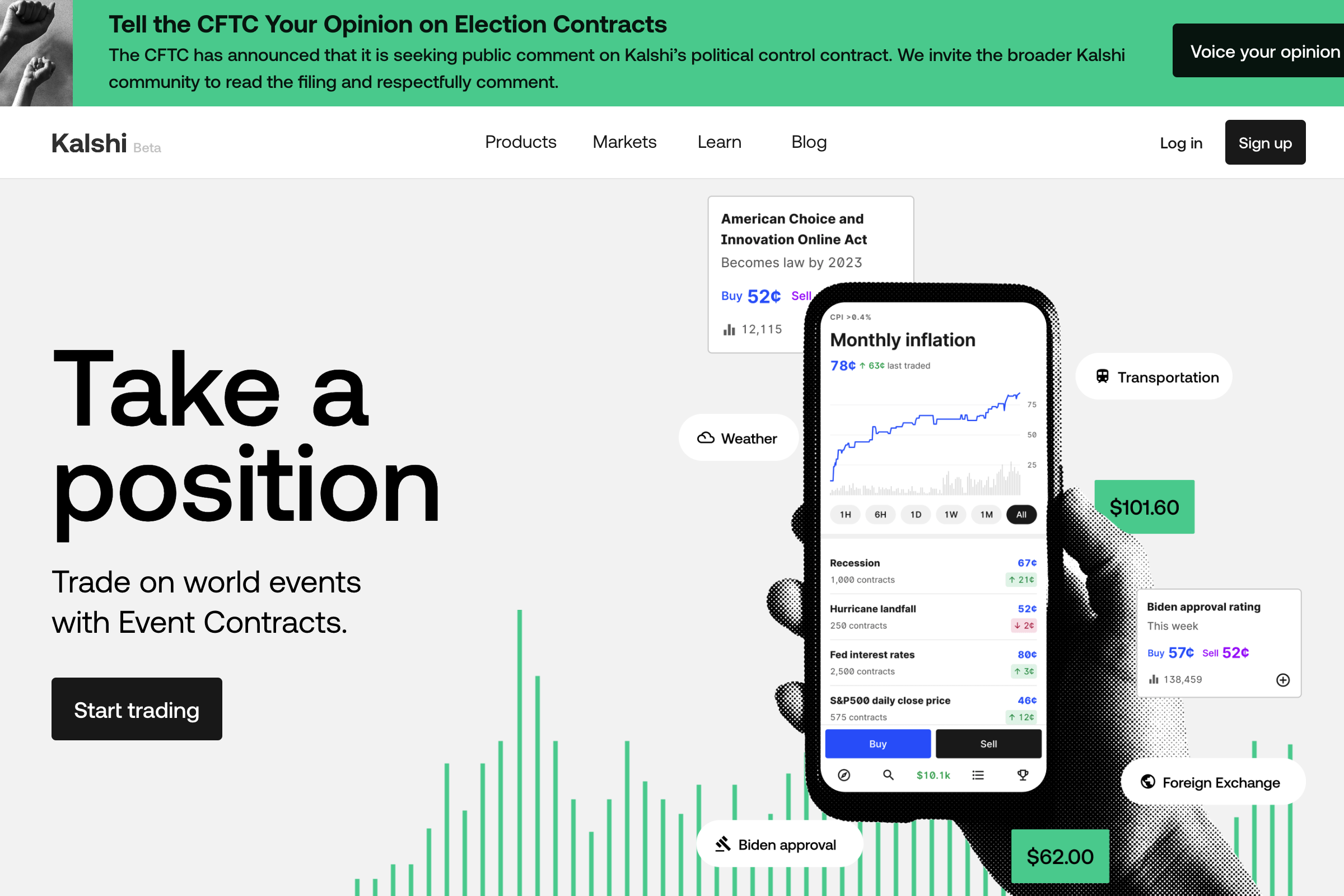 CFTC to Review Kalshi Proposal for Exchange on Congressional Elections

The Commodity Futures Trading Commission (CFTC) announced late Friday that it would review a request by online exchange Kalshi to offer futures contracts on which political party would control each chamber of Congress.

A screenshot of Kalshi’s website. On Friday, the Commodity Futures Trading Commission announced it would review a request by the online exchange to start offering futures contracts on the control of Congress. (Image: Kalshi)

Kalshi submitted the request – voluntarily, according to the CFTC – on July 19. The proposal stated it would offer contracts on the control of the US House and Senate on a biannual basis, essentially in every election year.

According to the commission’s statement, a 30-day public comment period will run through Sept. 25. In seeking comments, the CFTC included a list of 17 questions it wants input on from the public. Those questions include if Kalshi’s proposed contracts run “contrary to the public interest” and if they are “substantively different” from a Nadex proposal the CFTC rejected more than a decade ago.

“The Commission will endeavor to complete its review and issue an order with respect to this matter by October 28, 2022, or as expeditiously as is practicable while ensuring an adequate time for public notice and comment and Commission and staff review of the submission, as well as Commission review of public comments received,” the CFTC’s statement read.

On Saturday, Kalshi included a link at the top of its website urging visitors to give their opinions to the CFTC.

The CFTC’s announcement comes less than a month after it revoked a “no-action letter” it issued to organizers of PredictIt. That organization has run a political trading exchange since getting that letter back in October 2014.

While betting on political elections is allowed in other jurisdictions, including Great Britain and the Canadian province of Ontario, no US state that regulates sports betting allows sportsbooks to take wagers on elections. That has made PredictIt’s exchange the closest product to political betting available in the US.

Kalshi’s letter, sent by its Chief Regulatory Officer Elie Mishory, was dated 16 days before the CFTC advised PredictIt not to offer new markets. They were also ordered to liquidate outstanding markets by Feb. 15.

In the letter, Kalshi pointed out “an unregistered trading venue that purports to operate under a No-Action Letter that was issued by the Division of Market Oversight in 2014 and granted relief to operate without complying with a number of aspects of the Commodity Exchange Act and Commission Regulations” had offered similar contracts since 2014.

The letter also cites trading volumes for that unnamed operator. For example, it said 29.2 million contracts on which party would control Congress were traded on that site during the 2020 election cycle.

In its Oct. 29, 2014, no-action letter to Victoria University of New Zealand, which oversaw PredictIt as a research project, the CFTC laid out specific terms for the political trading market to operate under. That included limiting the number of traders to 5,000 per contract and the investment limit to $850 per person per contract.

Earlier this month, a PredictIt spokesperson defended the exchange’s operations to Casino.org.

The Exchange believes it is time to offer these widely used but unregulated contracts on a fully regulated basis so that U.S. persons can hedge risks arising from political control on a market with robust safeguards and transparency,” Kalshi’s letter stated.

Kalshi proposes to pay out contracts at $1, and participants would be limited to $25,000 per position on the contracts. The expiration date for the contracts would be Feb. 1 in the year the congressional term begins.

The CFTC designated Kalshi as a contract market in November 2020. While there is some overlap between the two on some political markets, Kalshi also offers trading on such markets as a hurricane hitting Miami or New Orleans, the average price of gas, flight delays at major US airports, and whether NASA will land a person on the moon before 2025.

Messages to Kalshi, PredictIt, and the CFTC on Saturday seeking comment were not immediately returned.

Not all CFTC Commissioners agreed with the decision to initiate the review.

Commissioner Caroline Pham said in her dissent that Kalshi should be able to offer its markets immediately and that the CFTC’s decision effectively will preclude the exchange from offering contracts on this year’s elections.

We must apply our rules fairly. Congress has mandated that the CFTC promote responsible innovation and fair competition,” Pham stated. “The Commission is already allowing an unregistered event contract market, PredictIt, to continue to operate its political control markets through the November 2022 election cycle and until Feb. 15, 2023. But the Commission has not taken any action on Kalshi’s contracts, even though Kalshi submitted their request for voluntary approval over a month ago, and have been discussing it with the CFTC for almost a year.”

Pham also noted that Kalshi has held about 36 meetings with the CFTC and staff during that time frame regarding its proposal. Officials with Kalshi also have held “many meetings” with congressional members during that time.

“In all that time, if the Commission had a concern that the political event contracts violate CEA section 5c(c)(5)(C) and CFTC Rule 40.11, or if the Commission did not ever intend to allow the contracts to be traded, then the Commission should have said so,” Pham said. “We should say what we mean and mean what we say.”