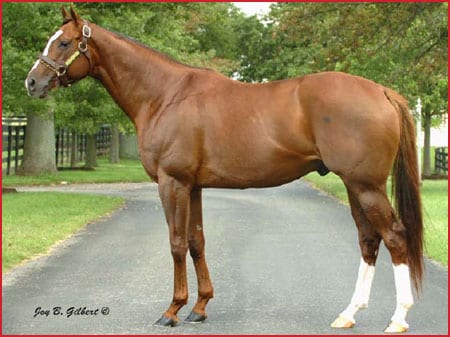 The social media accounts of Ramsey Farm, the operation that bred Kitten’s Joy, raced him, and stood him at stud for the majority of his career, announced the son of El Prado’s death on Friday.

According to a Hill ‘n’ Dale Farms statement, Kitten’s Joy followed his daily routine, which included being turned out in his paddock first thing in the morning. Around 10:30 a.m., the horse was observed to be lifeless in the middle of the field. Though apparently in optimal health with no signs of concern, it is believed that he most likely died of a heart attack.

“It is devastating to lose both my wife and her favorite horse in such a short period of time,” said Ken Ramsey, whose wife Sarah died on May 29. “My wife said ‘this horse will bring us a lot of joy,’ and he certainly did…Kitten’s Joy was the horse of a lifetime. His name will be in pedigrees for generations to come.”

Out of the winning Lear Fan mare Kitten’s First, Kitten’s Joy was offered by the Ramseys at the 2003 Ocala Breeders’ Sales Co. Spring 2-Year-Olds In Training Sale, but he left the ring under his reserve with a final bid of $95,000.

Kitten’s Joy was placed in the barn of trainer Dale Romans, and he finished out of the money in his debut as a juvenile on the main track at Saratoga Race Course. He remained on the dirt for his second start at Belmont Park, and was caught deep in the stretch to finish second by a head.

The colt found his calling after being moved to the turf for his third start at Belmont Park, which he won by 4 1/2 lengths. With a newfound purpose on the grass, Kitten’s Joy won his next four starts after breaking his maiden, highlighted by victories in the Grade 3 Tropical Park Derby at Calder Race Course, the G3 Palm Beach Stakes at Gulfstream Park, and the G3 American Turf Stakes at Churchill Downs.

Kitten’s Joy would never finish worse than second after moving to the turf. In addition to his trio of Grade 3 scores, his 2004 campaign featured victories in the G3 Virginia Derby and G1 Secretariat Stakes. He then jumped up to face older foes during his 3-year-old season, notching a victory in the G1 Joe Hirsch Turf Classic Invitational Stakes and a runner-up effort in the Breeders’ Cup Turf at Lone Star Park. He finished the 2004 season with the Eclipse Award as champion turf male.

At age four, Kitten’s Joy kicked off his season with a score in the G2 Firecracker Breeders’ Cup Handicap at Churchill Downs, and he made his final career start in the G1 Arlington Million, where he finished second.

Kitten’s Joy was retired during his 4-year-old campaign after suffering a cartilage injury to his left knee.

The Ramseys had a pair of recently retired stallion prospects, in Kitten’s Joy and Dubai World Cup winner Roses in May, both of which were being heavily recruited by Japanese buyers to stand internationally. Ken Ramsey wanted to keep one of the two, and he ultimately decided to sell Roses in May to stand in Japan; a choice that ultimately had dramatic ramifications for the North American stud book.

Kitten’s Joy retired to Ramsey Farm in Nicholasville, Ky., for the 2006 breeding season, where he was advertised for an initial fee of $25,000. His fee would eventually reach $100,000 during the 2014 breeding season.

He was initially supported by mares from the Ramsey family’s own broodmare band, with Ken Ramsey claiming several fillies and mares from the racetrack for the express purpose of breeding them to Kitten’s Joy.

Because of that strategy, the Ramseys enjoyed the lion’s share of the success when Kitten’s Joy emerged as one of North America’s leading turf sires. After helping the Ramseys earn the Eclipse Award as outstanding owner in 2004, their support of Kitten’s Joy at stud helped them earn another owner trophy in 2011 and sweep the outstanding owner and breeder trophies in 2013 and 2014

However, the greatest runner by Kitten’s Joy to be born and race under the Ramseys’ red and white silks is arguably Stephanie’s Kitten, who won the Breeders’ Cup Juvenile Fillies Turf in 2011, then came back in 2015 to win the Breeders’ Cup Filly and Mare Turf. Those two victories were among the nine total graded victories by Stephanie’s Kitten, who earned $4,292,904 on the racetrack.

As Kitten’s Joy’s reputation continued to build as a national-level sire, he began to attract interest from outside breeders, who raised their own successful runners.

In total, Kitten’s Joy has sired 981 winners, with combined progeny earnings in excess of $128 million. He has sired 58 graded or group stakes winners and 126 total stakes winners.

Kitten’s Joy was a two-time leading general sire in North America, finding his way to the top in different ways each time. He was also North America’s leading turf sire seven times.

In 2013, Kitten’s Joy was propelled to the top of the general list by high-end domestic turf success from Ramsey runners Big Blue Kitten, Stephanie’s Kitten, Real Solution, and Bobby’s Kitten. However, his rank-and-file was also bolstered by the last gasps of synthetic-surface racing at meets including Keeneland and Del Mar, which tended to favor turf-leaning runners, and were campaigned heavily by the Ramseys.

Kitten’s Joy earned the general sire title in 2018 with an international coalition of runners campaigned by a broader spectrum of owners. Hawkbill made a large contribution to the bankroll with a victory in the G1 Dubai Sheema Classic, Roaring Lion took home four combined Group 1 races in England and Ireland, and Oscar Performance triumphed in the G1 Woodbine Mile in Canada, among domestic victories by other horses.

In 2017, Hill ‘n’ Dale Farms acquired a 50 percent interest in Kitten’s Joy, and relocated the stallion to their farm for the 2018 breeding season. He remained with Hill ‘n’ Dale for the rest of his life.

It is with great sadness we announce the passing of our cherished Kitten’s Joy. pic.twitter.com/g6zi5Rnp04