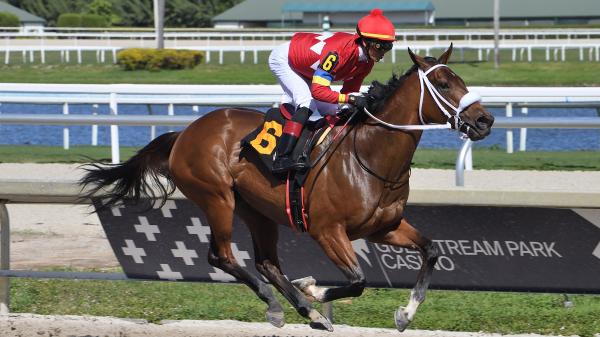 The champion older dirt female of 2021 gave notice that her 2022 season could be one to watch Feb. 26 with what trainer Fausto Gutierrez called “a spectacular performance” in the $150,000 Grade 3 Royal Delta Stakes at Gulfstream Park.

Leaving five overmatched rivals in the dust under a hand ride from jockey Jose Ortiz, the 6-year-old daughter of Super Saver took the lead early in the 1 1/16-mile Royal Delta, clicking through fractions of :24.39, :48.63, and 1:12.58. She hit the head of the lane full of run and was never challenged through a 1:36.74 mile en route to a three-length score, with Oritz keeping her focused alone to the wire with a few right-handed taps of the stick.

“She broke well,” said Ortiz. “I put her on the lead, and she relaxed well. Around the three-eighths pole I just smooched at her a little bit. I knew the race was over. She was full of herself. On the straight you could see I was just easing her up. She was looking around at the people inside the track and the photographers and stuff. She did everything very easy.”

Puerto Rican native Ortiz wore a blue and yellow band on his right arm Saturday in a show of solidarity with the country of Ukraine, which is currently under attack from Russia.

After chasing in second throughout, 30-1 shot Into Vanishing maintained that position under the line. Another longshot, 25-1 Il Malocchio, completed the trifecta three-quarters of a length back in third. The final time was 1:43.43 on a fast track. Letruska returned $2.20 on a $2 win ticket as the 1-9 favorite.

“I think this is important,” Gutierrez said. “Now, she is 6 years old, and she made it look easy. It’s not easy. It’s a grade 3. To win, you have to make this kind of effort.

“She looks in very good form and ready for the next race.”

It was the first start for the St George Stable homebred since her disappointing 10th in the Nov. 6 Grade 1 Longines Breeders’ Cup Distaff at Del Mar, the end to a season that saw her win six graded stakes, five of them in a row, including the Grade 1 Apple Blossom Handicap at Oaklawn Park in April, the Grade 1 Ogden Phipps Stakes in June, the Grade 1 Personal Ensign Stakes Presented by Lia Infiniti in August, and the Grade 1 Juddmonte Spinster Stakes in October. Gutierrez confirmed a return to the Apple Blossom is in the cards for Letruska, whose long-term goal is another chance at the Breeders’ Cup.

“We won that race last year so we have the obligation to be there again,” the trainer said. “This year, if everything goes OK, I would like her to run six times. Last year, she had eight stakes, a lot of (grade 1 races), traveling all around. Now, we need to go more passive.”

Letruska’s Royal Delta victory came over the track on which she defeated males by 4 1/4 lengths in a 1 1/4-mile stakes on the Classico del Caribe program for horses representing Latin American and the Caribbean back in December of 2019, her first start in the United States after six wins in Mexico.

Bred in Kentucky, Letruska is out of the grade 2-placed Successful Appeal mare Magic Appeal, who has produced four other winners including stakes winner and grade 1-placed Trigger Warning and stakes-placed American Doll. Magic Appeal’s youngest foals are a 2-year-old Arrogate colt and a yearling Malibu Moon filly. She was bred to Curlin for 2022.