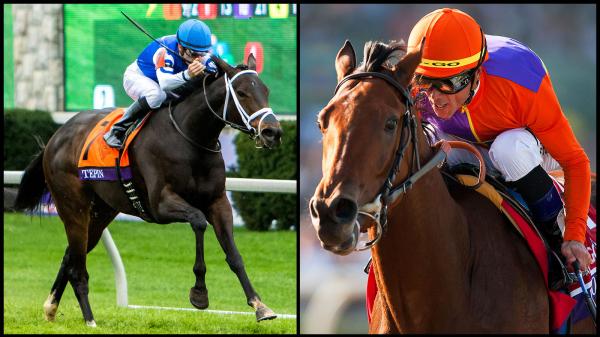 Topped by the additions of champions Beholder and Tepin, chosen in their first year of eligibility, eight new members have been elected to the National Museum of Racing and Hall of Fame class of 2022.

The class of 2022 will be enshrined Aug. 5 at the Fasig-Tipton sales pavilion in Saratoga Springs. N.Y., at 10:30 a.m. ET. The ceremony will be broadcast live on the Museum’s website at www.racingmuseum.org. The event is open to the public and free to attend.

Beholder is one of only two horses (Hall of Famer Goldikova is the other) with three Breeders’ Cup victories. Overall, Beholder won 13 graded stakes (11 Grade 1s), including a victory against males in the 2015 $1 Million TVG Pacific Classic. She is the only horse since 1976 to win at least one Grade 1 every year from ages 2 through 6.

“What a great honor it is to train a horse like Beholder,” said Mandella, who plans to attend her induction ceremony with his wife, Randi. “It was an experience only a few trainers have ever experienced, because there are very few horses that will ever be as good as she was. She overcame my training several times.”

During her first championship season in 2015, Tepin won four graded stakes, including the Breeders’ Cup Mile against a predominantly male field. She repeated as champion turf female the following year on the strength of a campaign that included Grade 1 wins in the Coolmore Jenny Wiley Stakes and Ricoh Woodbine Mile and a memorable score in the Queen Anne Stakes at Royal Ascot in England. Tepin defeated males in both the Woodbine Mile and Queen Anne. She won a total of 11 graded/group stakes victories and won at seven different tracks.

Other 2022 inductees include racehorses Hillsdale and Royal Heroine and trainer Oscar White via the Historic Review Committee, and Pillars of the Turf selections James Cox Brady, Marshall Cassidy, and James Ben Ali Haggin.

2022-05-11
Previous Post: Top MLB Parlay Picks to Bet On the Weekend: Yankees vs White Sox, Phillies vs Dodgers
Next Post: Q1 Results: US Gambling Prepares for a Record Year