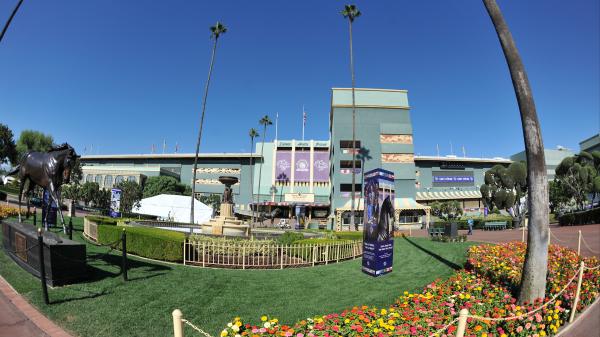 Dr. Charles Henry Strub was one of those entrepreneurial businessmen seemingly capable of succeeding in any imaginable enterprise. He started out small as a baseball player of modest ability and as a dentist keen to embrace innovation. By the time of his death, he had kickstarted the career of baseball legend Joe DiMaggio, amassed a multimillion-dollar fortune, and transformed Santa Anita Park into one of horse racing’s greatest stages.

Strub certainly didn’t let the grass grow under his feet. Born in 1884, he was always on the cutting edge of his business pursuits. Good marketing was a cornerstone of his policies. As a dentist is San Francisco, he was quick to adopt the use of anesthetics for extractions and frequently placed substantial advertisements in the San Francisco Examiner promoting his prices and the importance of good dental care.

But the sports world came calling, and Strub answered the call. Formerly a minor league baseball player, Strub reconnected to his roots in 1918 when he joined George Putnam and Charles Graham in purchasing the San Francisco Seals minor league baseball team. During the ensuing years, Strub played an integral and lucrative role in funneling up-and-coming players to major league teams.

“[Strub] demonstrated his Midas touch by selling a succession of players to the majors for an estimated aggregate of $1,000,000, in an era when most such deals were in the peanut class,” wrote Al Wolf in the Los Angeles Times of March 29, 1958. Joe DiMaggio and “Lefty” Gomez were just two of the notable players sold by the San Francisco Seals during Strub’s tenure with the team.

Tenacity was another of Strub’s strong suits. The 1906 San Francisco earthquake wiped out his dentistry practice, but he rebuilt. The 1929 stock market crash that triggered the Great Depression left Strub deeply in debt, but he soon got back on his feet. No matter how challenging the circumstances, Strub always seemed to bounce back stronger.

While Strub was recovering from the stock market crash, California legalized pari-mutuel wagering in 1933, paving the way for a return of horse racing on a major scale. Though Strub had no previous ties to the sport, he sensed an opportunity and began exploring options for building a racetrack. With high-profile support from film producer Hal Roach, singer/actor Bing Crosby, and businessman Leigh Battson, the Los Angeles Turf Club emerged, constructing a beautiful racing facility in the picturesque foothills of the San Gabriel Mountains.

Santa Anita Park opened on Christmas Day 1934 with a crowd of 25,000 in attendance, and the inaugural meet was a rousing success. With Strub serving as vice president and general manager, Santa Anita was always on the forefront of technology and innovation in horse racing. Stopwatches for timing races? How archaic! Santa Anita installed the first electric timer in the United States. Placing judges trusting their eyes to determine the winner in photo finishes? Perish the thought! Santa Anita placed their trust in a newfangled photo finish camera.

In “The History of Thoroughbred Racing in America,” William H. P. Robertson recounts the opening of Santa Anita on Dec. 25, 1934. “Built on the site of the old Lucky Baldwin estate, with a Spanish-American architectural motif that harmonized with its surrounding, the fancy new plant boasted a grandstand with a seating capacity of 8,000 plus a clubhouse that could accommodate 450. … On Christmas Eve a pinto pony could be seen running back and forth across the finish line, to test the new camera above the press box, which was capable of taking photographs that could be printed within three minutes.”

The downhill turf course, constructed in 1953 and modeled after tracks in Europe, proved to be an instant hit with horsemen and racing fans alike. Santa Anita was also among the early adopters of the modern starting gate.

These innovations were popular, but the real attraction was Santa Anita’s lucrative purse structure. The track’s signature race, the Santa Anita Handicap, carried an annual purse of $100,000-added, the highest ever offered for a race in the United States. Daily average purse distribution routinely ranked among the highest in the country.

“On active days at Santa Anita … a man who may properly be termed its presiding genius, sits in an office on the roof of the grandstand and looks out over one of the greatest racing domains in the United States,” penned the acclaimed writer Damon Runyon in a column published in the Miami Herald of Nov. 17, 1941. “He is Dr. Charles H. Strub … whose management is admittedly the reason for the astonishing success of the operation … [Santa Anita] handles around $900,000 per day in mutuels and has frequently had million-dollar days. There has never been anything like it in racing history.”

A heart attack in 1945 prompted Strub to slow his pace, but only a little. He remained involved as executive vice president and witnessed the glory of racing’s post-war boom, when purses skyrocketed and the annual foal crop nearly doubled in less than a decade. The Santa Anita Derby became a $100,000 event in 1946, making it one of the richest races for 3-year-olds anywhere in the country. The Santa Anita Maturity for 4-year-olds was inaugurated with an identical purse in 1948, while the $100,000 San Juan Capistrano Handicap became the nation’s richest grass race when switched to the new turf course in 1954.

In March 1958, after more than two decades at the helm of Santa Anita, Strub passed away from the effects of a stroke. He was mourned as a game-changing racing executive who helped propel the sport forward with innovation and marketing. Five years later, Santa Anita honored his memory by renaming the Santa Anita Maturity in his honor. The Charles H. Strub Stakes – later just the Strub Stakes – was held through 2014 and won through the years by such standout stars as Affirmed, Spectacular Bid, Alysheba, and Silver Charm.

“The name of Dr. Charles Strub will live forever in the annals of thoroughbred racing,” wrote Paul Zimmerman in the Los Angeles Times of March 29, 1958. “Certainly, through the building and progressive operation of the Los Angeles Turf Club, he was a mighty leader in the climb of racing from the horse-and-buggy class into a place where attendance has taken national leadership over all other professional sports.”