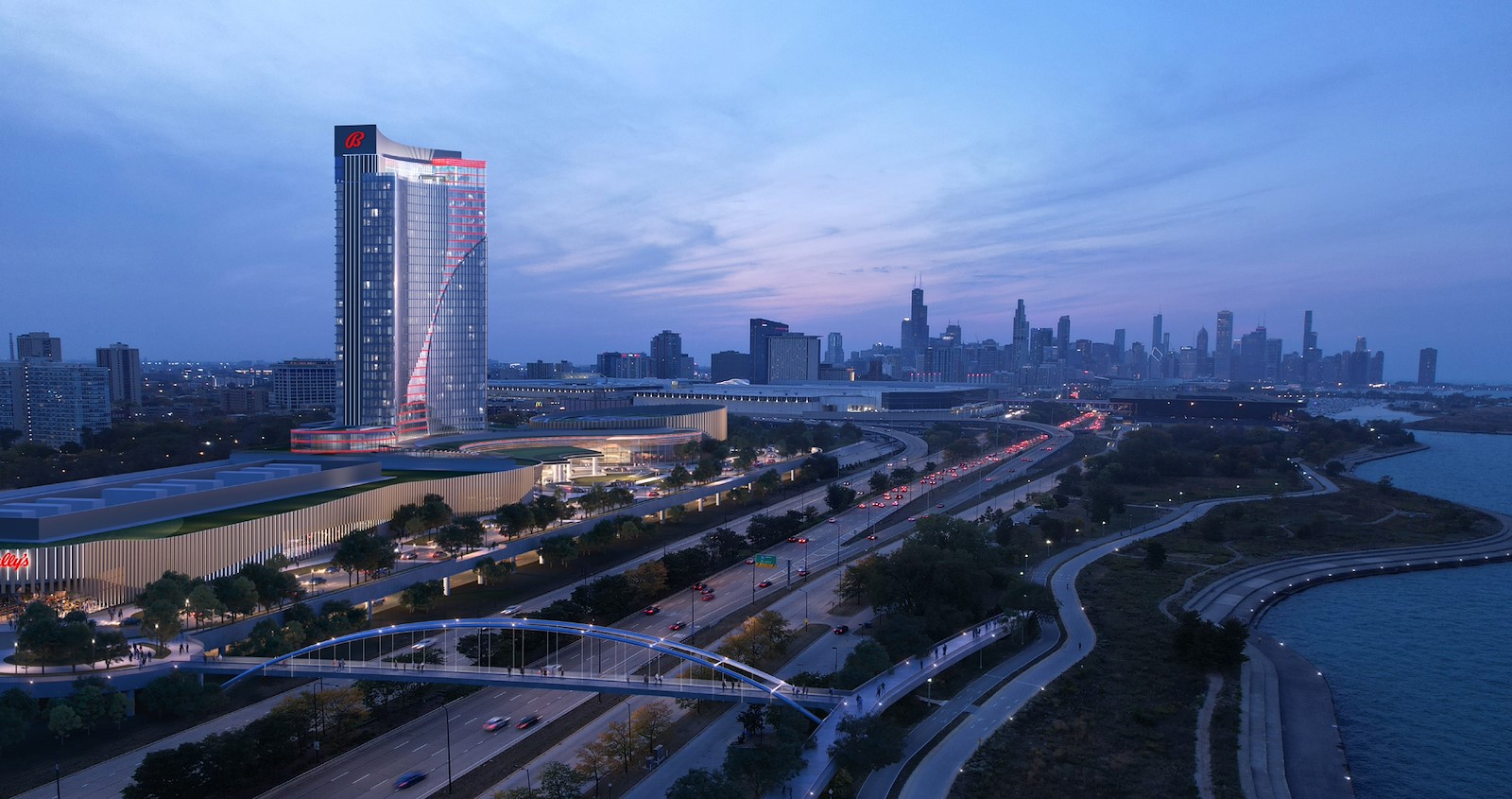 A Chicago official whose district includes a potential site for the city’s casino project has called for that proposal to be scrapped immediately.

A rendering of a casino Bally’s Corp. proposes to build just south of the McCormick Place Convention Center in Chicago. The proposal is one of five the city received, but a local alderman said her constituents do not want the casino in their neighborhood. (Image: Bally’s Corp.)

Alderman Sophia King, whose district includes part of the city’s Bronzeville neighborhood, gave a statement to The Chicago Sun-Times saying she understands the project can help the city financially but the massive development “should not be done at the expense of our communities, especially marginalized ones.”

The site is one of two proposed locations the company submitted to city officials two weeks ago. In a release, Bally’s called the area an “underutilized site” that it would transform into “an entertainment destination that connects Chicago’s convention hub with the vibrant, predominantly African-American Bronzeville community.”

Since the beginning of this process, the community has been clear in their desire not to see a casino built at the site,” she said, according to The Sun-Times.

The other site Bally’s wants the city to consider is the corner of West Chicago Avenue and North Halsted Street, the current location for The Chicago Tribune’s printing plant.

At either site, Bally’s proposes to build the resort in two phases. The first would be a casino with 2,700 slot machines and 95 table games. The $1 billion development would include a 100-suite luxury hotel and an outdoor performance center that seats up to 1,000 people.

The second phase would expand the casino to 4,000 gaming seats, include a 400-room hotel tower, a 3,000-seat indoor entertainment center, a 20,000-square-foot exhibition space that includes a Chicago sports museum.

McCormick Place was a popular site for all three companies bidding for the casino license.

Hard Rock International has plans to build its casino, if awarded, at One Central, a proposed $19 billion development across 34 acres that’s just north of the convention center and across Lake Shore Drive from Soldier Field. The Hard Rock Casino would be one of several commercial, hospitality, residential, health-related, and educational developments among the 20 million-square-foot footprint.

Rush Street’s other proposal is to build the casino at The 78, a 62-acre development along the Chicago River that once served as a railyard. The project’s name is based on the city having 77 neighborhoods, and developer Related Midwest said this would be Chicago’s newest.

During a press conference last week, Chicago Mayor Lori Lightfoot declined to discuss whether she had a favorite among them, but added she was excited by what proposals were submitted.

“Our expectation is that we will bring the various respondents in and let them do presentations,” she said. “I would like to get a finalist to recommend to the Illinois Gaming Board sometime in the first quarter of next year.”

The IGB would still need to vet the project and approve the license before it could proceed.

Getting a casino up and running as quickly as possible is a priority for Lightfoot as proceeds from the casino will go toward covering pension costs for the city’s first responders. To aid in that, the city is encouraging bidders to operate a temporary casino while the permanent venue is completed.

The winning bidder will also get the opportunity to install slots at the city’s two major commercial airports, Midway and O’Hare International.

On Monday, Neil Bluhm, the chairman and co-founder of Rush Street Gaming, spoke before a joint committee of aldermen but not directly regarding his company’s casino proposals.

Bluhm appeared before the City Council’s Zoning, Landmarks, and Building Standards and License and Consumer Protection Committee in opposition of an ordinance that would allow sportsbooks to operate in the city.

The 2019 expanded gaming law passed by Illinois lawmakers legalized sports betting and allowed for more casinos, including the license for Chicago. The sports betting provision allowed the state’s professional sports teams to host sportsbooks, but that was contingent on the city’s approval.

Bluhm questioned why the city would allow five stadiums and arenas to open sportsbooks before whichever company wins the casino license even gets a chance to break ground. Regardless of which casino site is chosen, he said sportsbooks in or near stadiums would have “a materially negative impact” on casino revenues.

He cited an Innovation Group study that said revenues for the Chicago casino’s sportsbook would drop from $40 million annually to $13 million if the Bears, Blackhawks, Bulls, Cubs, and White Sox opened their own.

“The stadiums are really great locations,” he told the aldermen during the non-voting meeting. “Wrigley Field and United Center are phenomenal locations. The vast majority of Chicagoans will live much closer to the stadiums than the Chicago casino.”

Last year, the Cubs and DraftKings announced plans for a sportsbook at Wrigley.

Proponents of the measure, though, pointed out that brick-and-mortar sportsbooks account for very little of the sports betting market, especially in Illinois, where 96 percent of all legal bets are placed online.

Mara Georges, a former Chicago city attorney, represented the sports teams at the committee meeting, told lawmakers that plans for sportsbooks at the stadiums would create hundreds of temporary construction jobs and led to more permanent hospitality industry positions.

And while Georges said she supports and respects Bluhm, a highly influential Chicago businessman, she reminded the committee that he does have an agenda. Even if neither Rush Street proposal gets selected, the company operates and owns a minority stake in Rivers Casino in nearby Des Plaines.

That casino is the largest in the state.

“I question the fact that he would encourage you to vote against an ordinance that pushes business out to his Des Plaines casino,” she said. “Because that is what it will do.”