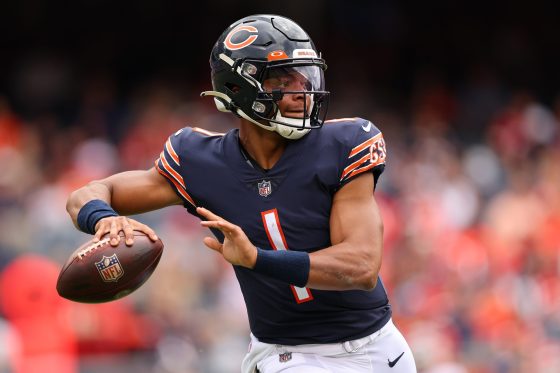 CHICAGO, ILLINOIS – AUGUST 13: Justin Fields #1 of the Chicago Bears looks to pass against the Kansas City Chiefs during the first half of the preseason game at Soldier Field on August 13, 2022 in Chicago, Illinois. (Photo by Michael Reaves/Getty Images)

The Bears (2-4) hit the road to take on the Patriots (3-3) in what is lining up to be a historical Monday Night in New England. After a win over Cleveland last week, Pats coach Bill Belichick tied George Halas for the second most wins as a NFL head coach. New England will be motivated at home to get Belichick historical win number 325 in a prime time MNF game against the struggling Bears. Kickoff is set for 8:15 PM EST at the Patriots’ Gillette Stadium.

This Chicago offense would not be so bad if they could get some level of consistent production from this pass offense. To this point, Chicago has the worst pass offense in the league, and it isn’t even close. The Bears are putting up a measly 122.8 passing yards per game, the lowest in the league by more than 30 yards per game. If somehow, some way, Justin Fields can get this air attack back on the tracks, Chicago has a shot at an upset victory on Monday Night.

Former 15th overall pick Mac Jones is expected to return to the starting lineup after missing the last 3 games with an ankle injury. While Jones had no limitations in practice this week, there has been speculation that the Patriots might wait one more week to bring Jones back in due to the high level play produced by third-string-turned-starter Bailey Zappe. Zappe, who was called on after injuries to Jones and backup Brian Hoyer has taken his chance well, throwing for 596 yards and four touchdowns with just one interception. Zappe had his best game last week, throwing for 309 yards and two touchdowns in a 38-15 rout of the Browns. If you’re a Pats fan, who would you start?

While these two teams don’t play often, New England has dominated whenever these teams do meet. The Patriots have won the last four regular season matchups vs the Bears, with the last Chicago win in the series taking place way back in 2000.

The Bears haven’t gotten much love from the bookies or bettors so far this year, and the trend continues on Monday Night with Chicago coming in as 8.5 point underdogs on the road. This line opened up at +6, but money coming in on the Pats has inflated this line to the point where it is hard to not take the Bears to keep this one close. Sure, they have a historically bad passing game to this point of the season, but the defense has been able to keep games close despite their lack of potency on O. 3 of Chicago’s 4 losses have been one-possession games, and Chicago is holding opponents to 19.2 points per game, 11th best in the NFL.

Furthermore, the Bears are tough to beat through the air, as Chicago gives up just 178.7 passing yards per game. Compound this with the question marks about who the starting QB will be for New England, and it’s hard to see the Pats blowing this one open. Look for Chicago’s D to come up with enough stops to keep this one interesting against a Pats team that might be being overvalued at the books. New England has easily covered the spread in each of their last two wins, but this trend has led to a spread line that can be taken advantage of on Monday night. If Justin Fields and this average Chicago offense can give us around 13-17 points, that +8.5 spread will be very attainable. Expect a fairly low scoring matchup that will be much more competitive than many have anticipated.

Montgomery is the fourth-most targeted receiver on the Bears roster so far, and has the fourth-most receiving yards. He has also exceeded 11.5 receiving yards in four of the five games he has played in this season. Look for the Bears to get quarterback Justin Fields to execute simple halfback screens and check downs to Montgomery to get his confidence going in what has been a challenging start to the season for the QB.

Meyers has emerged as the top target in New England, and his production is undervalued with most bookies. Despite missing two games due to injury, Meyers leads the Pats in receiving yards (321 yards), receptions (24), and targets (31). While yardage might be the safe play on this one, we’re taking a risk and taking Meyers to score. Meyers should have a massive game as he’ll be heavily favored all night in his one v one matchup against underperforming DB Kyler Gordon.

Fields and his rushing threat is one of Chicago’s best options in a very limited offense. Fields is among the most efficient rushers of the ball, averaging 5.2 yards per rush, while rushing the ball 9 times per game. Fields rushed the ball a season-high 12 times last week against the Commanders for 88 yards. At 6’3, 228 lbs, Fields poses a real problem for tacklers, especially in the opposition secondary. While the Bears might not put up a ton of points against the Pats, the run game of Fields will be relied upon yet again, making this one our number one prop for this matchup. Bet this now at BetUS.com