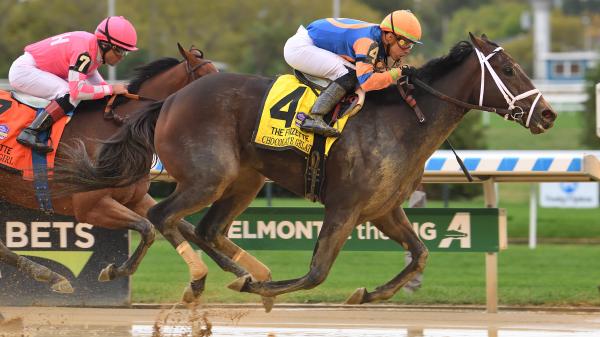 Repole Stable’s Chocolate Gelato fought off a determined You’re My Girl coming out of the turn to win the $400,000, Grade 1 Frizette Stakes by a length on a sloppy main track at the Belmont at the Big A meet held at Aqueduct Oct. 2. The victory earned the 2-year-old daughter of Practical Joke a spot in the NetJets Breeders’ Cup Juvenile Fillies at Keeneland Nov. 4.

Jockey Irad Ortiz Jr. gave Chocolate Gelato a patient ride along the rail in the early going of the one-turn mile Frizette, when You’re My Girl served as pacesetter through opening fractions of :23.14 and :46.90. As the field entered the turn, Ortiz weaved through horses and came around to the outside of You’re My Girl to take the lead entering the stretch. You’re My Girl did not taking being passed quietly and re-rallied under Joel Rosario but could not catch the leader. The final time was 1:38.57.

Trainer Todd Pletcher said the Frizette gave him confidence that Chocolate Gelato would have no trouble handling the Juvenile Fillies distance of 1 1/16 miles.

“She settled through and handled the mile really well. I liked the way she turned off, and it gives you the impression two turns is going to be within her range,” he said. “I think she got there a little bit early and was waiting a bit. (You’re My Girl) didn’t give up; that’s a nice filly. She fought back, so I was proud of our filly for staying on to the wire. That was a nice field she beat.”

Chocolate Gelato finished third in her debut July 14 at Saratoga Race Course. In her second start Aug. 14, she won gate to wire by 8 ½ lengths.

Ortiz said the filly is still learning and got a lot of the race.

“I had to work a little more aggressive on her, but she kept responding and got the job done,” he said. “I let her do her thing and she was moving already so I said, ‘Alright, it’s time to go,’ and I didn’t want to get in her way. I had a lot of confidence in her. She’s a nice filly, so I ride her with confidence. When I asked, she was there for me.”

Besides being a Breeders’ Cup Challenge Race, the Frizette is a points race for the 2023 Longines Kentucky Oaks. Chocolate Gelato earned 10 points for next spring’s Oaks.–Eric Mitchell

Spendthrift Farm’s Major Dude had made his first three starts on dirt with some success, winning his debut at Monmouth Park back in July and running third in his most recent start, the Sapling Stakes at Monmouth on Aug. 27. But trainer Todd Pletcher decided to exercise the son of freshman sire Bolt d’Oro on turf twice at Belmont Park in advance of a start in the $200,000, Grade 2 Pilgrim Stakes on the Oct. 2 card at Belmont at the Big A, and that change in surfaces proved to be beneficial, as Major Dude posted an upset win over favored I’m Very Busy, earning a spot in the Breeders’ Cup Juvenile Turf in the process.

Sent off at odds of 10.20-1, Major Dude sat in third through six furlongs before angling out in the far turn and taking the lead in early stretch. I’m Very Busy, the 3-4 favorite, rallied in the middle of the yielding turf course but ran out of real estate and Major Dude prevailed by length. Final time for 1 1/16 miles was 1:46.60.

“At the half-mile, I think I can go by those horses whenever I want to,” said Ortiz, Jr. “I feel like my horse switched off on the backside and saved a lot of energy for the end and I took some time.

“I worked the horse and I thought he loved the grass,” added Ortiz, Jr. “He felt really good on it and worked really well on the bridle. He handled [softer going] really well. He got the job done, so I can’t complain.”

Major Dude, a Spendthrift homebred, improved his career record to two wins in four starts with earnings of $165,250.

“He’s a colt that we’ve really liked from the very beginning,” said Pletcher. “He was one of the first to come in [this year]. He was training well on the dirt and we gave him a couple opportunities and we just kind of got the feeling that we weren’t getting everything that we thought we had. So, I saw a couple of Bolt d’Oros were running well on the turf and said, ‘Let’s work him on the turf.’ Then it was like, OK, that’s what we were hoping to see. I’m not surprised he stepped up today. He’s always been a very professional, straightforward colt. I’m happy he found what he was looking for.”–ABR Staff