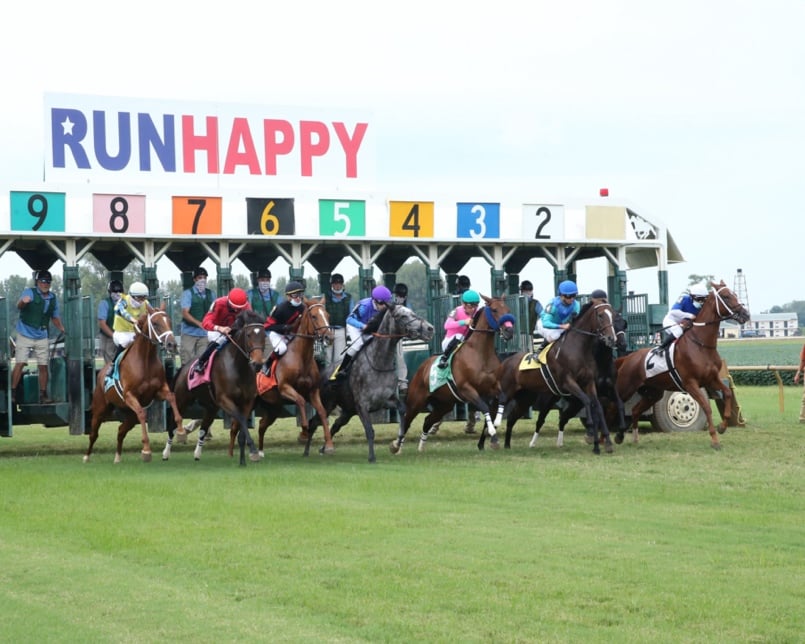 Horses break from the starting gate in a recent race at Ellis Park in Henderson, KY. On Thursday, Churchill Downs Incorporated announced it would purchase the track from Laguna Development Corp. for $79 million. (Image: Ellis Park/Twitter)

The deal is contingent on the Kentucky Horse Racing Commission (KHRC) approving the sale, and Churchill’s announcement indicated the deal would likely close shortly after that occurs.

Our team is committed to building a summer meet at the ‘Pea Patch’ that keeps more Kentucky-bred horses and Kentucky-based trainers’ in their home state while attracting top horse racing talent from across the country to the Bluegrass State each July and August,” he said.

Besides the Western Kentucky track, Churchill Downs also acquires the rights to develop a satellite facility in Owensboro, a city of 50,000 people located about 25 miles east of Henderson. That facility will host a simulcasting center, a historical horse racing (HHR) venue with 600 machines, and several food and beverage options.

Including the Owensboro project, Churchill Downs said it plans to invest $75 million in Ellis Park. Churchill Downs Senior Vice President of Corporate Development Jason Sauer said more details would be announced in the near future.

“The opportunity to bring Churchill Downs to Owensboro is particularly significant to us,” he said. “We are eager to start the work to elevate Ellis Park’s reputation as a summer destination for Thoroughbred racing while delivering a premier gaming and entertainment experience to Daviess County.”

LDC, which manages gaming operations for the Pueblo of Laguna tribal nation in New Mexico, purchased Ellis Park in June 2019 for $11 million. A month later, LDC announced plans for a $55 million overhaul of the track.

But those plans languished as the COVID-19 pandemic hit. Last fall, LDC officials presented a $14.2 million improvement plan and told state racing officials that they had undertaken several maintenance projects to improve operations at the now-100-year-old track.

In its statement announcing the sale, LDC said that it “transformed” the track “into a strong competitor in the Kentucky racing and gaming market.” According to KHRC’s June report, Ellis Park had 307 HHR terminals at the track. That’s still the smallest of the seven in operation, but more than the 179 the track held when LDC bought the track.

“This transaction is an opportunity to generate a significant profit for the Pueblo of Laguna,” LDC President and CEO Maxine Velasquez said in a statement. “The cash generated by the sale provides much-needed capital to improve and expand LDC businesses in New Mexico, benefit our shareholders, and advance future business development efforts.”

Once finalized, Ellis Park will be the third Kentucky thoroughbred track Churchill Downs owns. Besides the namesake track, the company also owns Turfway Park in Northern Kentucky. CDI bought the track from JACK Entertainment in 2019.

“Getting Ellis Park’s facilities and purses to a higher level is the last piece of the puzzle for Kentucky racing, and it speaks volumes that Churchill Downs is willing to spend this kind of money to acquire the property,” said Thayer, a veteran racing industry official. “Tens of millions more is needed to upgrade both the equine and human facilities in Henderson, and to build the new track extension in Owensboro. I have full faith and confidence in Churchill Downs’ commitment to do these things, and I look forward to following its progress.“

The purchase of Ellis Park is the latest in a series of transactions CDI has made in the past year.

Last week, the company closed on the purchase of Chasers Poker Room in New Hampshire, which it announced back in March. CDI plans to invest $150 million in the acquisition, which will include installing up to 800 HHR machines in the charitable gaming venue 30 miles north of Boston.

The company is also awaiting closing on its deal to acquire most of Peninsula Pacific Entertainment’s gaming portfolio. That includes the del Lago casino in upstate New York and Colonial Downs racetrack in Virginia.

Churchill has also been on the selling side of deals, too. Most notably, last September it agreed to sell Arlington Park in Illinois to the Chicago Bears, who are considering the 327-acre facility for a new stadium. Last month, it agreed to sell a 40% stake in its United Tote division to NYRA as the two racing giants plan to make parimutuel racing available through online sportsbooks.

In addition to that, CDI also won the license to open a casino in Terre Haute, IN, last November. The company broke ground on the $260 million project in June.