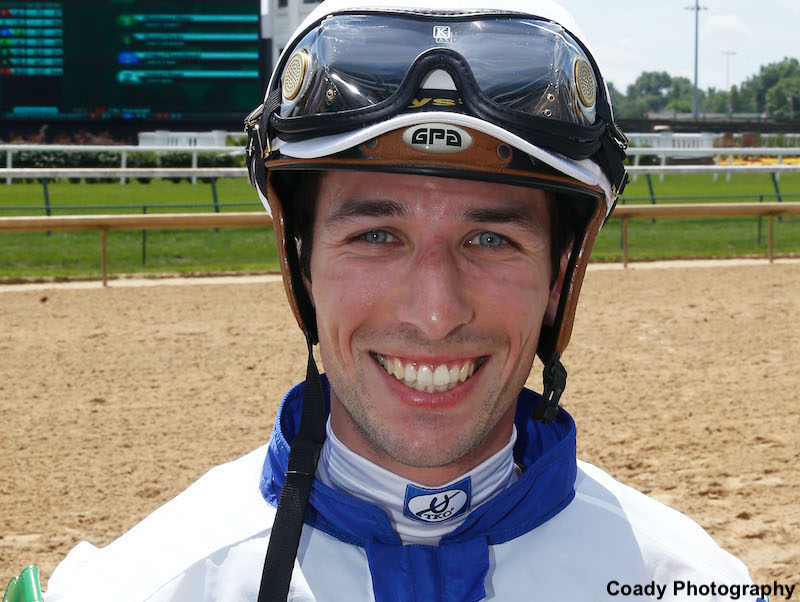 The eighth race on Churchill Downs’ opening day card Sunday was ruled no contest after jockey Alex Achard was injured in a one-horse spill in the 1 1/16-mile event for 2-year-olds run over a sloppy and sealed dirt track.

Achard was aboard Paddock Boss, who appeared to clip heels and fall hard amidst bunched horses nearing the first turn. The Twirling Candy colt was racing to the inside of B Minor with Corey Lanerie aboard, and Echo Again and jockey Ricardo Santana Jr. Echo Again was just in front of Paddock Boss (No. 8) and B Minor (No. 10) while trying to avoid going wide after breaking from the outside 11 post.

Track announcer Travis Stone alerted jockeys that the race was called off as the field approached the far turn. Achard and Paddock Boss went down between the finish line and first turn where horses would still be going at a high rate of speed had the race continued.

Achard was taken to a local hospital with pain in his right knee, but X-rays showed nothing was broken, Daily Racing Form’s Marty McGee said via Twitter. The rider has since been released.

Paddock Boss, trained by Rodolphe Brisset for Storyteller Racing and Schroeck Racing LLC, was euthanized. He was making his fourth start in Sunday’s allowance optional claiming race and entered off a maiden-breaking win Sept. 13 at Horseshoe Indianapolis.

After beginning his professional career in France, Archard shifted his tack to the U.S. in 2018. This year, he has compiled a 48-41-31 record from 371 mounts who have amassed purse earnings of $1,007,004, according to Equibase statistics. His top U.S. mount to date is Brazilian-bred In Love, who he rode to victory in the 2021 Keeneland Turf Mile (G1) before they finished seventh in the Breeders’ Cup Mile (G1) at Del Mar.

This entry was posted in People by Paulick Report Staff. Bookmark the permalink.