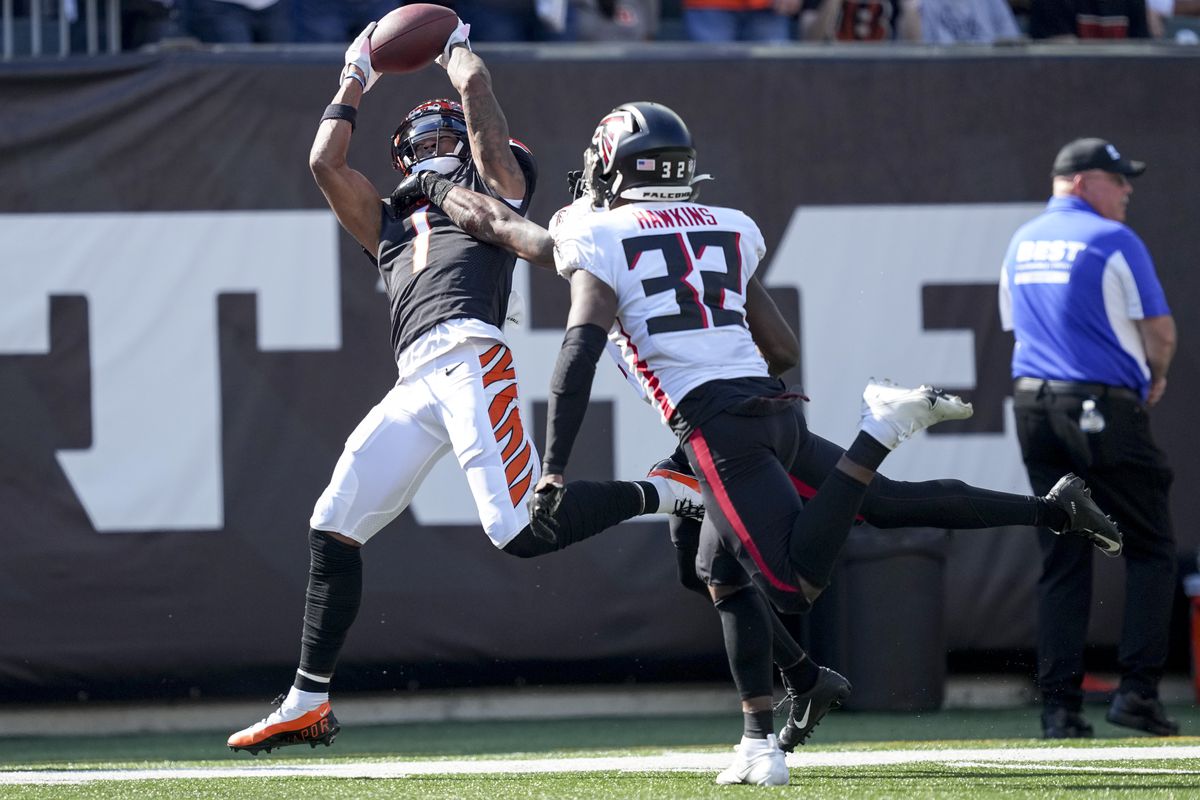 Just as the Cincinnati Bengals shook off a Super Bowl hangover and hit their stride with a two-game winning streak, disaster has struck. They learned that wide receiver Ja’Marr Chase could miss anywhere from four to six weeks with a hip injury.

Cincinnati Bengals wide receiver Ja’Marr Chase catches a touchdown pass in between two defenders from the Atlanta Falcons at Paycor Stadium in Cincinnati. Chase suffered a hip injury later in the game, which will keep him out at least a month. (Image: Dylan Buell/Getty)

The Bengals diagnosed Chase with a hip flexor strain. They’re expected to send him to the IR for at least four weeks. Chase avoided a dislocated hip, and this injury will not require surgery.

The Bengals have two games left before a bye in Week 10. They visit the Cleveland Browns on Monday Night Football in Week 8 before they host the Carolina Panthers in Week 9. After the bye, the Bengals have two tough road games against the Pittsburgh Steelers and at the Tennessee Titans.

In Week 13, they return home to play Patrick Mahomes and the Kansas City Chiefs. It’s a rematch of the AFC Championship from last postseason. The Chiefs are seeking revenge after the Bengals knocked them out of the playoffs to secure a spot in Super Bowl LVI.

Chase’s hip injury happened in the first half of Week 7’s victory against the Atlanta Falcons. The training staff checked Chase out at halftime, but he returned to action in the second half. Even with a sore hip, Chase hauled in eight catches for 130 yards and two touchdowns.

At the start of the second quarter, Joe Burrow connected on a 32-yard touchdown strike to put the Bengals up 21-0.

That was definitely the best pass he’s ever thrown to me,” said Chase. “Like that was a dime, bro. A dime!”

The gutsy performance against the Falcons happened a week after his best game of the season. In Week 7,  Chase tallied seven catches, 132 yards, and two touchdowns in a four-point victory against the New Orleans Saints at the Superdome.

In his second season as a pro, Chase caught 47 passes for 605 yards and six touchdowns. Through the first seven games, Chase is tied for second in the NFL in receiving touchdowns with six, tied for fifth in receptions, and is sixth overall in yardage.

The Bengals selected Chase with the fifth-overall pick from the 2021 NFL Draft. Chase and quarterback Joe Burrow played together at LSU and even won a national championship. The Bengals wisely listened to Burrow and drafted Chase in the first round.

In 17 games as a rookie last season, Chase became an instant star with 181 receptions for 1,455 yards and 13 touchdowns.

Without Chase as the #1 wideout option, the Bengals will rely on Tyler Boyd and Tee Higgins. Boyd caught 29 passes for 455 yards and three touchdowns this season. Higgins added 31 catches for 455 yards, and two touchdowns.

Bengals Back on Track

The Bengals looked awful to start the season when they stumbled out of the gate and lost the first two games by a combined six points. The Pittsburgh Steelers edged out the Bengals by a field goal in overtime during the season opener. In Week 2, the Dallas Cowboys beat the Bengals 20-17.

The Bengals’ third loss happened in a road game against the Baltimore Ravens in Week 5. The Ravens won 19-17, and the Bengals dropped another close contest. All three losses were by a margin of three points or less, and they lost three games by a combined eight points.

Since starting the season 0-2, the Bengals won four out of their next five games and improved to 4-3 on the season.

The Bengals looked impressive in their last two victories. They unleashed a vicious aerial attack against the Falcons in a 35-17 victory in Week 7. For the first time since last year’s postseason, the Bengals offense looked unstoppable in the first half against the Falcons. Burrow torched their secondary for 345 passing yards and finished the game with 481 passing yards, the second-best game of his career. The win came at a devastating cost because the Bengals lost Chase to a hip injury.

The Bengals saw their Super Bowl LVII odds improve to +2200, according to DraftKings’ NFL futures board. After they lost the first two games of the season, the Bengals bottomed out at +3500 odds.

The Ravens lead the AFC North with 5-3 record, but the Bengals are close behind at 4-3. It looks like it’s a two-way fight for the division crown. The Ravens are the betting favorite to win the AFC North at -280, according to a recent update by DraftKings. The Bengals are their closest competition at +250 odds.

The Browns and Steelers are battling in the AFC North basement with a 2-5 record. Browns quarterback Deshaun Watson is still out for at least another month while serving an 11-game suspension for reportedly sexually assaulting numerous massage therapists when he played for the Houston Texans.

2022-10-28
Previous Post: Doyle Brunson to Play in Charity Tourney and another ‘Poker Face’
Next Post: At What Age Will Tom Brady Retire Odds