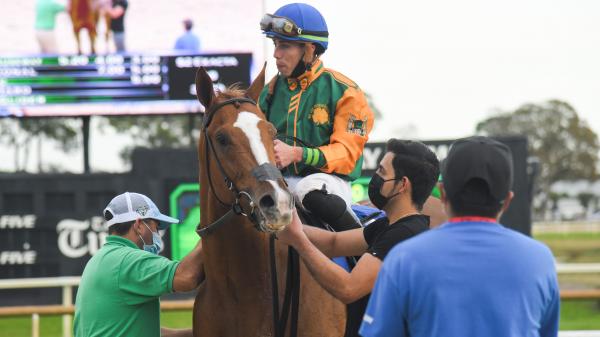 Patrick O’Keefe, who bred and owns Classic Causeway with Clarke Cooper, is featured this week. The son of Giant’s Causeway looms as a prime contender in the Lambholm South Tampa Bay Derby on Saturday at Tampa Bay Downs. The chestnut colt already owns a win at the track, posting an emphatic 3 ¾-length decision in the Feb. 12 Sam F. Davis Stakes.

Classic Causeway is trained by Brian Lynch. He followed an impressive rout in his career debut at Saratoga with a third-place finish in the Claiborne Breeders’ Futurity at Keeneland and a runner-up effort in the Nov. 27 Kentucky Jockey Club Stakes at Churchill Downs.

O’Keefe, 80, is a native of Ogden, Utah, who excelled as a real estate developer. He began a modest breeding operation, known as Kentucky West, in St. Charles, Idaho in 2000. He fervently hopes to have his first Kentucky Derby starter in Classic Causeway. He participated in a question-and-answer session conducted on behalf of America’s Best Racing:

PEDULLA: What can you tell me about the early stages of Classic Causeway’s career?

O’KEEFE: Brian called and said, “I’m taking some horses to New York. I’d like to take Classic Causeway with me.” I said, “That’s sounds all right, I guess.” He went ahead and took him down there and then I got another call and he said, ‘The good news is we’re going to run him in a maiden race at Saratoga. The bad news is we’re going to run against some of the top trainers in the world.” The first thought that came to my mind was, “We’re going to give the horse an inferiority complex.”

PEDULLA: What made you decide to run?

O’KEEFE: He said, “Patrick, the horse is doing well. It’s training well. It’s doing everything I’d want him to do. I’m not worried a bit about it.” I said, “That sounds good to me.”

PEDULLA: What do you remember about that promising debut?

O’KEEFE: When I looked at him in the gate, it was like he had fallen asleep. He looked so comfortable. When he broke, he just exploded out of the gate. He went to the lead and kept it. He went coast to coast. You talk about going zero to hero, I couldn’t believe it.

PEDULLA: What is it like to finally have a horse of this caliber?

O’KEEFE: The trials and tribulations, you wouldn’t even believe it. This thing is a fairy tale.

PEDULLA: What are your expectations for the Tampa Bay Derby?

O’KEEFE: It could be close or he could blow it out. If this horse wants to go, he’s going to let him go. I can tell you that straight out.

PEDULLA: Do you think you are going to win?

O’KEEFE: Well, there is always something that can happen.

PEDULLA: Can he get the Derby distance of a mile and a quarter?

O’KEEFE: I don’t think there is any horse out there that can touch him at seven furlongs. But now he’s starting to move into liking distance more and more. He’s moved me to thinking we may have a real chance of winning the Derby, if we get through this all right.

PEDULLA: Can you talk about the job Brian Lynch is doing in training this horse?

O’KEEFE: It’s amazing. I think he’s taken everything he learned from Bobby (Frankel) and put it into this horse.

PEDULLA: What does it mean to possibly have your first Derby horse?

O’KEEFE: Well, it’s life-changing for me. I’m at the end of my life cycle. It solidified everything I ever believed in that I could do in this industry. It’s pretty amazing.

PEDULLA: Does it add to your satisfaction that you bred the horse?

O’KEEFE: Oh, yes. That’s what it was all about. Anybody with money can go buy a horse and have a shot. But to go out there and feed the horse for a couple of years and nurture it, that’s a pretty good accomplishment.

PEDULLA: What would a Kentucky Derby victory mean to you?

O’KEEFE: I think it would be great for the industry, for openers. It would get more people to believe in what could be done. If you put enough work into it and you stay with it, you can succeed in this industry. I think that would be a heck of a contribution from me. I’ve got two bottles of Opus One that I’ve saved for 20 years. They’re sitting here with dust on them. I’ve been waiting 20 years to open them.

2022-03-09
Previous Post: Cricket Legend and Poker Fan Shane Warne Passes Away at 52
Next Post: NHL Playoffs Betting Predictions of Teams On the Race for a Postseason Spot