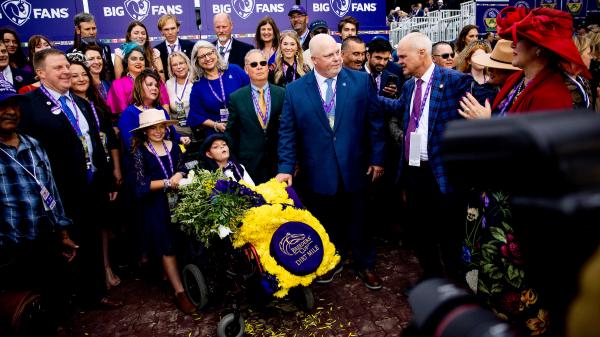 The Turf Publicists of America (TPA) announced Nov. 21 that the 2022 Big Sport of Turfdom award, which recognizes a person or group of people who enhances coverage of Thoroughbred racing through cooperation with media and racing publicists, will be presented to Cody Dorman.

When Cody’s Wish crossed the finish line first in the Big Ass Fans Breeders’ Cup Dirt Mile, the horse’s biggest fan and namesake, Cody Dorman, was there to celebrate the victory that put an exclamation point on the most heartwarming story in racing.

Dorman, who was born with the rare genetic disorder Wolf-Hirschhorn syndrome, is unable to walk or communicate without utilizing a tablet but he speaks volumes about what it means to never give up. The continuing story of the now 16-year-old who first met an unnamed foal by champion Curlin when Godolphin hosted Cody and his family during Keeneland’s Make-A-Wish Day in 2018 is what fairy tales are made of.

From their first meeting, the colt always showed an uncanny interest in Cody and those visits gave Cody the strength to continue through some incredibly tough times. In return, Cody brings something special to that foal who has grown into a racehorse — Cody’s Wish has never lost a race with Cody in attendance.

“Cody has brought to the forefront what it means to be strong and brave in his personal life as well as highlighting the extraordinary interaction that occurs between horses and humans,” said Wendy Davis, TPA president. “He gives inspiration to us all.”

The Big Sport of Turfdom award will be presented at the University of Arizona Race Track Industry Program’s annual awards luncheon Dec. 6. The luncheon is part of the 2022 Global Symposium on Racing at Loews Ventana Canyon Resort in Tucson, Ariz. The luncheon is included in registration fees for the symposium.