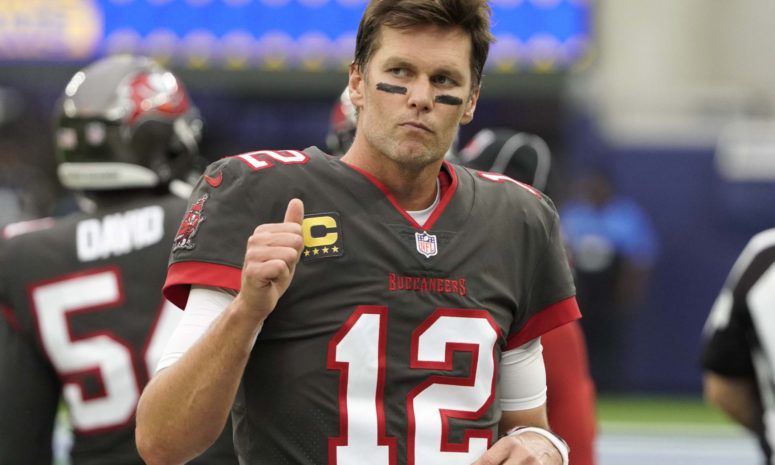 While most of America was busy studying their NCAA Tournament brackets, Tom Brady decided to scrap his retirement plans.

Tampa Bay Buccaneers quarterback Tom Brady, seen here on the sidelines at SoFi Stadium in Inglewood, Calif., in a 2021 NFL game against the Los Angeles Rams, announced Sunday that he would return for another season. The 44-year-old quarterback had announced his retirement in January. (Image: Icon Sportswire)

The NFL’s GOAT shocked the sports world Sunday evening when he announced on social media that he would not retire and don the helmet once again for the Tampa Bay Buccaneers this upcoming season.

These past two months I’ve realized my place is still on the field and not in the stands,” Brady tweeted. “That time will come. But it’s not now. I love my teammates, and I love my supportive family. They make it all possible. I’m coming back for my 23rd season in Tampa. Unfinished business LFG.”

He’ll turn 45 in August while he’s in preseason camp.

These past two months I’ve realized my place is still on the field and not in the stands. That time will come. But it’s not now. I love my teammates, and I love my supportive family. They make it all possible. I’m coming back for my 23rd season in Tampa. Unfinished business LFG pic.twitter.com/U0yhRKVKVm

The timing of his announcement was not ideal for some sports writers and pretty much every news site. Nor was it good for the person who dropped more than $518,000 – on Saturday, mind you – for what was considered Tom Brady’s last touchdown pass. Technically, it’s still his last for the time being.

However, the timing was crucial for the Bucs. Starting at noon ET Monday, a 52-hour negotiating window starts for NFL teams. They can begin discussions with unrestricted free agents, who can then sign contracts starting on Wednesday afternoon.

Knowing that Brady will be coming back should help the Bucs attract interest in the market, even though they’re presently one of nine teams considered to be over the salary cap, according to OvertheCap.com.

Despite being the league’s oldest player last season by five years of age, Brady still enjoyed one of his best seasons. His 5,316 passing yards and 43 touchdown passes led the NFL. He finished second in Most Valuable Player voting and third for Associated Press Offensive Player of the Year.

So, when Brady decided he wasn’t hanging up his pads after all, oddsmakers shortened the Bucs’ Super Bowl odds considerably. At PointsBet, Tampa Bay is now the favorite at +700.

FanDuel offered the Bucs at +2200 on Sunday morning. Hours later, the odds dropped to +750, making them the co-second choice. At BetMGM, the Brady-less Bucs were available for +2500. Now? They’re +850, the third-choice overall and the favorites in the NFC. MaximBet shifted Tampa Bay from +2800 to +800, making them its third choice as well.

Two GOATs on the Same Field This Weekend

Brady posted his decision the same weekend that he and his kids went to England and watched Manchester United play. The Glazer family, which owns the Buccaneers, also owns the English Premier League soccer team.

His tweet about his comeback wasn’t the only interaction he had that went viral on social media. After United beat Tottenham Hotspur on Saturday, thanks to Cristiano Ronaldo’s hat trick. Brady and his kids were on the field and met with 37-year-old international star, who unofficially the all-time leading scorer in the game’s history thanks to his performance.

During their meet-up, Ronaldo had a question for his peer.

Now, we know the answer.