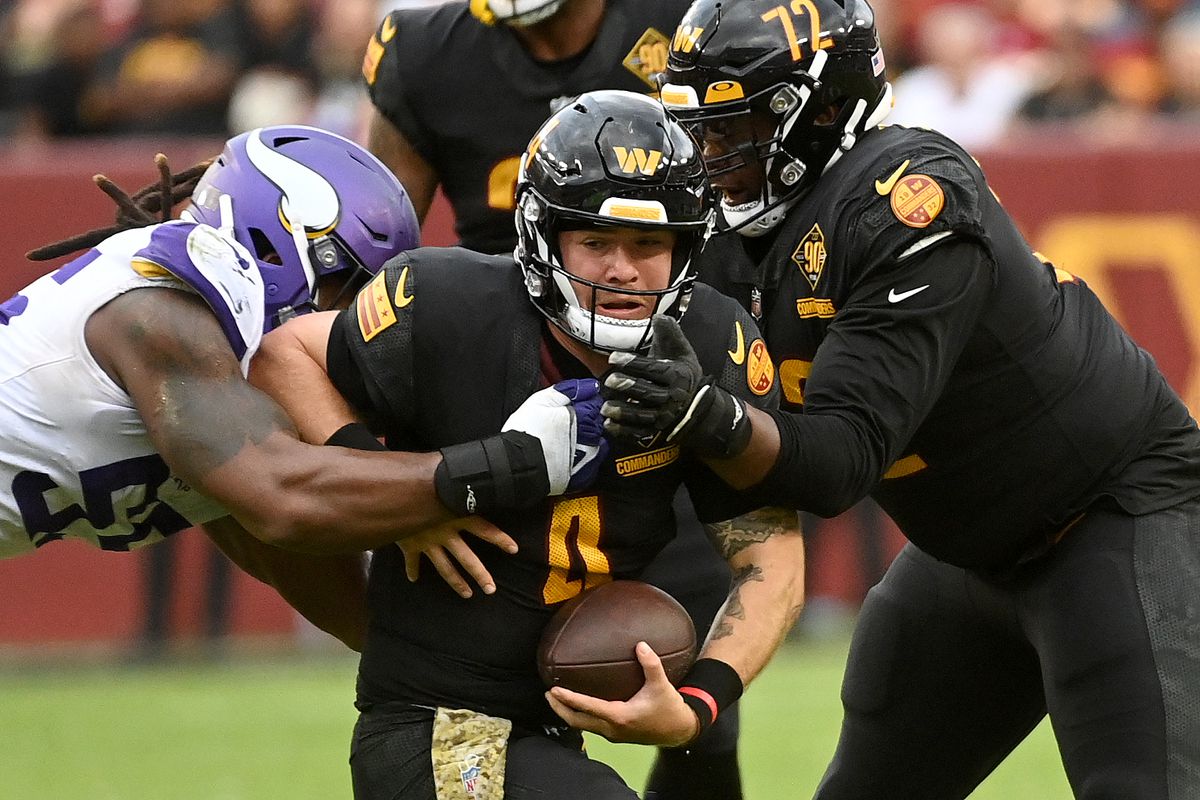 Commanders QB Taylor Heinicke tries to escape from a Minnesota Vikings defender in the team’s Week 7 loss. He’s back on the field today as the Commanders face the league-leading Philadelphia Eagles. (Image: Getty Images)

They allegedly colluded to “mislead residents… about an investigation into a toxic work culture.” The suit comes at a time that the Commanders are already dealing with enough troubles.

Philadelphia arrives in this NFC East matchup as the only unbeaten team in the NFL, with a record of 8-0 this season. They’re coming off a decisive win against the Houston Texans 29-17 almost two weeks ago. That break will have afforded them more than enough time to rest up.

The Commanders aren’t likely to give these Eagles much of a challenge defensively or offensively. They are now 4-5, only barely pulling together a win against the Indianapolis Colts before losing a tough-fought battle to the Minnesota Vikings last week.

The Eagles have limited their opponents to just a 68.0 passer rating through the first eight weeks of the season. That’s good enough to put them in first place in the league. In addition, Philadelphia leads the league with 12 interceptions this year, tying its record from 2015.

For all of their successes, Philadelphia still has room for improvement. The team is fourth in opponent completion percentage, taking up a position behind the New England Patriots, the New York Giants and the Cincinnati Bengals.

For all their troubles, the Commanders aren’t the worst team in the NFC. However, that doesn’t mean the Eagles can take it easy. Washington head coach Ron Rivera is a tough nut to crack, and has proven himself on multiple occasions.

The ongoing lawsuit the Commanders face will likely have an impact on today’s performance. However, it could be positive.

In a response to Racine, Snyder tried to deflect the suit by highlighting crime in DC, and it didn’t go over well with players. They might use today’s game as a way to vent their frustrations since they can’t go after their real target.

In the last game between these two, in Week 3, Philadelphia defeated Washington 24-8 in a game where the Eagles were dominant from start to finish. They will be ready for a repeat, playing on their own turf in front of their own fans.

In their last 15 games, Philadelphia is slightly ahead of Washington at 9-6. However, in their entire history, they’re 42-43-3 at home.

This game won’t be as exciting as the Minnesota Vikings – Buffalo Bills matchup from Sunday, but it will still be tough. The Commanders will put up some plays, both on offense and defense, though they will still come up short.

The over/under is higher than it should be, especially since QB Carson Wentz won’t start for Washington. Still, if his replacement, Taylor Heinicke, can keep the offense in line, this game is going to be another close one.