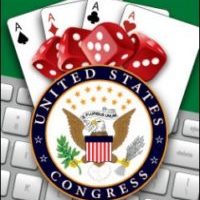 This week’s gambling news comes from the US Congress, where several members are urging the Department of Justice to take action against offshore operators, and to ban online gambling that isn’t regulated in the United States. Additionally, the American Gaming Association wants search engines like Google to block these offshore operators from search results. What are the motivations behind these moves?

The numbers are in, and Nevada kept their streak of billion dollar months alive in May, bringing in $1.3 billion… partly because over 3 million people visited Las Vegas that month. But even with gambling doing so well there and all across the country, some people just aren’t happy. This week’s big story finds that there’s a new push to ban online gambling in America… at least those offshore operators. You know, the ones that aren’t bringing in any tax dollars for the states. And now, several members of the US Congress are asking the Department of Justice to step in and crack down.

In a letter to the DOJ these Congressmen use all the right pejoratives to explain why offshore operators need to be dealt with. Calling them “predatory” and saying that they expose players to “vulnerability”… but what’s really going on here? You may recall that just four short years ago these same people were saying these same things about sports betting expansion and online gambling regulation.  That is, until they regulated these activities for themselves and started profiting from all that tax revenue. So now, after fighting the DOJ so that they could regulate these activities and profit from them, they’re asking the DOJ to go ban online gambling operators and shut them down. You know, eliminate the competition!

Please don’t misunderstand me here. I am all for regulation and player protections. And to be fair, not all of these offshore sites are run by the most reputable individuals. In fact, if you play at an unregulated offshore site you really are rolling the dice (pun intended). However, there are many reputable offshore sites, regulated in recognized jurisdictions, which are perfectly safe for players… although the legality of an American playing there is a bit murky.

Now our friends at the American Gaming Association work closely with regulated gaming all across the country, so it’s really no surprise that they are now asking search engines, including Google, to ban online gambling operators offshore from their search results. AGA President, Bill Miller, recently said that these offshore gambling sites are now a serious threat to the regulated gaming industry. Translation? They’re taking money away from regulated operators! But hey, kudos to him for at least being honest about it.

This week’s game review is a real blast from the past, as we’re taking a look at the Knight Rider online slot, a five reel, four row game with 26 paylines from our friends at Net Entertainment. It features a bonus round and bonus spins, big hair, and both wild and scatter symbols! You can find this review and hundreds more when you visit and subscribe to our YouTube channel.