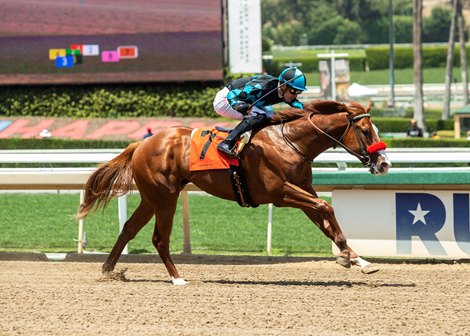 The $300,000 Runhappy Del Mar Futurity (G1) Sept. 11 isn’t the only graded race with potential Breeders’ Cup implications at Del Mar on closing day, Sept. 11. Preceding the featured race is the $100,000 Del Mar Juvenile Turf (G3T), a one-mile grass race, which can propel horses toward another grass start in the Breeders’ Cup Juvenile Turf (G1T) in the fall.

O’Neill is back Sunday in the Del Mar Juvenile Turf with three starters: Mark Davis’ Ah Jeez , a maiden winner going five furlongs on the Del Mar turf Aug. 26; Reddam Racing’s Syntactic , another Aug. 26 maiden winner, defeating state-breds at a mile on turf; ant West Coast Stables’ Tahoma , who after a debut win was runner-up on dirt in the five-furlong Fasig-Tipton Futurity at Santa Anita June 18.

Sixteen 2-year-olds were entered in the oversubscribed Del Mar Juvenile Turf, two of them also-eligibles. All of the entrants have between one to three starts apiece, and some are maidens.

Outside-drawn horses are at risk of ground loss with a short run to the first of two turns.

2022-09-09
Previous Post: Bet This World Series Underdog to Win It All Now –
Next Post: What Happened to the QE2 and its Casino?