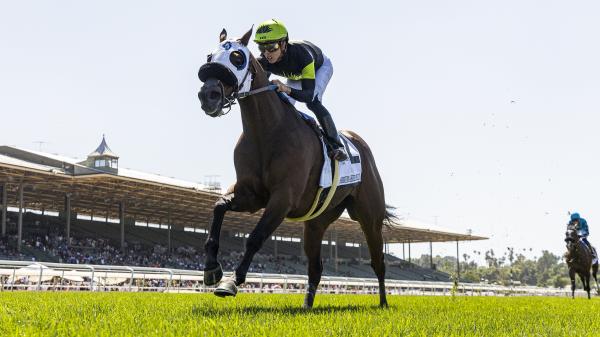 Ortiz, already the winning jockey in three of the first four races on the card, including the Grade 1 Hollywood Gold Cup, obviously was riding with confidence as he let Count Again take things easy at the back of the six-horse Shoemaker field as Dance Some Mo and the favorite, Smooth Like Strait, raced on the lead.

Entering the stretch turn, Flavien Prat gave Smooth Like Strait his cue and the 5-year-old son of Midnight Lute immediately said goodbye to the early rival and opened a daylight lead — an advantage that clearly was in immediate jeopardy.

Ortiz had Count Again in full flight by mid-turn and as the two straightened for home, Count Again gobbled up ground quickly, blew by the favorite without resistance and ran on to win by 1 1/4 lengths in a hand ride. Smooth Like Strait was easily second with Masteroffoxhounds third.

D’Amato trains both Count Again and Masteroffoxhounds as well as Dance Some Mo, whose early pressure on Smooth Like Strait helped set things up for his stablemate.

The victory was the second top-level score for the 7-year-old, Ontario-bred gelding by Awesome Again out of the Red Ransom mare Count to Three.

The race was the first North American Breeders’ Cup “Win and You’re In” Challenge race and earned Count Again a guaranteed slot in the Grade 1 FanDuel Breeders’ Cup Mile at Keeneland in November and D’Amato sounded enthusiastic about that prospect.

“This puts him in a position to win the Breeders’ Cup Mile in November,” he said.

Ortiz said he wasn’t at all concerned about being well back of the leaders early as he was following the trainer’s advice.

“He told me to let him do his thing. Don’t rush him. I told Mr. D’Amato the horse was ready to run. He was ready to win,” Ortiz said.

He admitted he realized the pace was “a little fast. But actually I was in contact with the field. I was happy where I was. My horse, most of the time he comes from way back off the pace and I just wanted to be in contact with the field and he put me right there in the first turn so I say, ‘Why not? Let him be there.’ And he responded really well.

“The trainer told me to keep him out, make sure he’s out in the clear and that’s what I did. When he hit the clear, I hit him one time and he took off.”

D’Amato was happy with the performance and the ride.

“He was in great position today and turning for home, he had the leader measured. He was sitting on a big race today,” the trainer said.

“I feel great, thank God,” he said after the Gold Cup win. “All the fans here — feels good, it reminds me of home. I enjoy it.”

Count Again was bred by Sam-Son Farm and races for Sam-Son in partnership with Agave Racing. The Shoemaker victory follows a sixth-place finish in his last race, the Grade 1 Maker’s Mark Mile at Keeneland where he was beaten just 1 3/4 lengths in a blanket finish while coming from last of eight.

He started the 2022 campaign with victories in the Grade 3 Thunder Road Stakes and the Grade 1 Frank E. Kilroe Mile, both at Santa Anita.

For Smooth Like Strait, the 2021 Shoemaker winner, it was another case of “second-itis”. Since that victory a year ago, he now has posted five seconds and a third from six starts, the third coming in the Maker’s Mark Mile. He also was second in the Breeders’ Cup Mile in November at Del Mar. –Bob Kieckhefer

There Goes Harvard Schools Them in Hollywood Gold Cup

Take a fresh horse who love 10 furlongs, add a trainer with recent Breeders’ Cup and Triple Crown race success, and throw in a fantastic New York rider. The result? A Grade 1 Hollywood Gold Cup victory. Without a stakes win of any kind to his name, There Goes Harvard may have surprised a few, but he turned in an almost flawless performance to become a grade 1 winner.

Trainer Michael McCarthy has always felt that There Goes Harvard had the talent to step up to graded company. When the May 30 Gold Cup field at Santa Anita came up light in numbers, McCarthy decided the time had come to take the shot. Getting Irad Ortiz Jr. in the saddle was an extra bonus.

When the gate opened in the 1 1/4-mile Gold Cup, Stilleto Boy went to the front, a tactic that had worked well in the Californian. However, Defunded didn’t let that last for long. The two of them raced together early, and then Defunded took over before completing the first quarter-mile in :22.76 and he raced the first half-mile in :46.13.

There Goes Harvard broke from the rail toward the back of the compact bunch, but he was eager to run.

“There Goes Harvard was fighting a little bit with me going into the first turn,” said Ortiz. “They went a little fast. I tried to let him relax, settle a little bit, and he did come back to me on the backside. That was the key.”

Ortiz was able to send There Goes Harvard three wide around the second turn, putting them in the clear and in a position to challenge Defunded at the eighth pole. There Goes Harvard got to the lead and edged away to beat Defunded by a length, stopping the clock in 2:02.66. Defunded finished 3 1/4 lengths ahead of third-place Royal Ship, followed by Stilleto Boy and Spielberg.

“I was pretty excited when I saw him stick his head in front coming to the three-sixteenths pole,” said McCarthy. “I got a little emotional, but things just worked out properly.” -Tracy Gantz