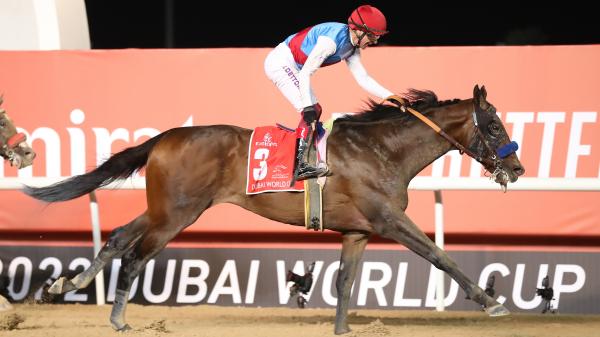 There may be no bigger lightning rod for controversy in Thoroughbred racing than Bob Baffert, but whatever anyone’s feelings about the Hall of Fame trainer may be, there’s no denying that he’s a master at winning major races and shining when the spotlight is brightest.

The 26th edition of the $12 million Group 1 Dubai World Cup Sponsored by Emirates Airline showcased that in a victory by Country Grammer which mixed irony, joy, anger, vindication, and any other emotion known to mankind as the racing world came to grips with it.

Almost 11 months after Medina Spirit won the Grade 1 Kentucky Derby Presented by Woodford Reserve for Baffert and owner Amr Zedan, only to be disqualified for a positive drug test in a case that has sparked ongoing legal battles, Country Grammer gave Baffert and Zedan, as well as fellow owners WinStar Farm and Commonwealth Thoroughbreds, a highly emotional victory over favored Life Is Good in the about 1 1/4-mile international classic.

“Ladies and gentlemen, that’s Bob Baffert right there,” Zedan said after the race. “That’s what Bob Baffert is capable of doing. I am overwhelmed. This is an amazing feeling. I can’t believe it.  I am so overjoyed. It’s been a rough year and now we’re back.”

The victory by the son of Tonalist came on the heels of a strong second-place finish in the $20 million Group 1 Saudi Cup in his first start in nearly nine months. While some horses might bounce off such a big effort, Country Grammer took another big step forward Saturday under iconic European jockey Frankie Dettori.

“It takes the best trainer in the world. That horse was off the bench and (Baffert) got him back,” Zedan said. “This win reminds me of Medina Spirit. He was a champion and these horses are all heart. I hope Medina Spirit is reinstalled as the Kentucky Derby winner, God willing. I can’t believe I’m sitting here and my silks are here. I am just very thankful to the entire team and Frankie, who gave him a perfect ride. He is one of the best, if not the best. Results speak louder than words. A trainer of that caliber is bound to produce such results. I am just dedicating this race to him.”

The victory, which came just two days after four of Baffert’s horses were sent to other trainers so they could earn qualifying points for the Kentucky Derby, was the fourth for both Baffert and Dettori in the DWC.

“It’s been a long trip, Frankie just rode him awesome. He couldn’t have done any better. The speed worked out just as we thought it would, he put him in a close enough spot that when he called upon him, he’s a true mile-and-a-quarter horse and it kicked in,” said assistant trainer Jim Barnes who cared for Country Grammer during his time overseas. “I give a lot of credit to Bob Baffert for his ability to come back and perform, it’s what we do. We’re great off a layoff. I’m just so excited. I was here when Arrogate won the Dubai World Cup, so this is my second with Bob and it is very, very special.”

It was WinStar Farm which purchased the son of the Forestry mare Arabian Song for $110,000 out of the Lane’s End consignment when he was sold at the 2021 Keeneland January Horses of All Ages Sale following the death of original owner Paul P. Pompa Jr. Following Country Grammer’s victory in the mile-and-a-quarter Grade 1 Hollywood Gold Cup Stakes in his second start for Baffert, WinStar brought in Zedan and Commonwealth as partners.

While Saturday’s victory rewarded WinStar’s faith in the 5-year-old, the race also produced mixed emotions as the stable also owns favored Life Is Good in a partnership with China Horse Club. After the Grade 1 Pegasus World Cup Invitational Stakes Presented by 1/ST Racing winner grabbed the early lead and led for much of the race, the son of Into Mischief tired in the final furlong while racing 1 1/4 miles for the first time and could not resist Country Grammer’s final surge. He dropped back to fourth at the wire.

Country Grammer crossed the wire 1 3/4 lengths in front of Hot Rod Charlie, who grabbed second for a United States exacta, while Chuwa Wizard, who was second in last year’s Dubai World Cup, rallied late for third on a night when Japanese horses accounted for five wins on the rich undercard.

Trained by Todd Pletcher after starting his career with Baffert, Life Is Good suffered just his second loss in eight career starts.

“That’s racing at its best,” said Elliott Walden, CEO, president and racing manager of WinStar Farm. “This is why we ran Country Grammer as well. Life Is Good didn’t quite show up like he could but Country Grammer was a great option. We knew he’d get the mile-and-a-quarter. We’ll go back and regroup with Life Is Good. He ran his race. It was a long way to come and the track was a little dead. Bob Baffert is a heckuva of a horse trainer and he showed it tonight.”

Boat Racing, Gainesway Stable, Roadrunner Racing, and William Strauss’ Hot Rod Charlie, a grade 1-winning son of Oxbow, prepped for his runner-up finish with a group 2 stakes win over the track last month. The 4-year-old now owns a record of 4-5-3 in 16 starts.

“We wanted to win but we’re super proud of his effort,” trainer Doug O’Neill said. “These are one of the few times that you wish horses could talk. I think maybe blinkers might need to go back on. He broke okay but then when he got behind horses, maybe that was it. (Jockey Flavien Prat) said he took the kickback pretty well, though, so we’ll re-group and we’ll give him plenty of time now and we’ll huddle up and think of a game plan.”

A winner of 4 of 10 starts with earnings of $10,460,000 bred by Scott and Debbie Pierce in Kentucky, Country Grammer is the fourth of six foals by Arabian Song and is a half-brother to the grade 3-placed Joyful Cadence (Runhappy).

Future plans for the multiple grade 1 winner once he returns to the United States are uncertain, complicated by a 90-day suspension Baffert is facing due to the positive drug test for betamethasone by the late Medina Spirit.

2022-03-27
Previous Post: PokerStars Spring Championship of Online Poker Begins in America
Next Post: Bless Him has a class edge