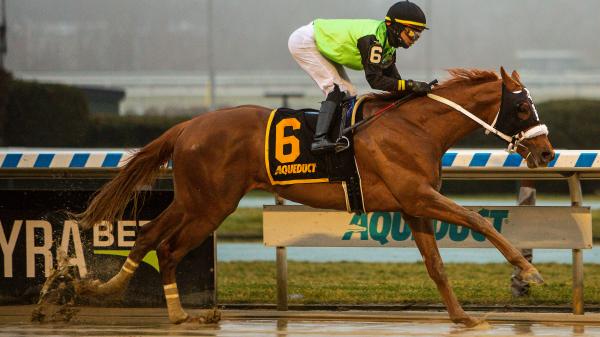 Considering how much uncertainty is already woven into a Jan. 1 stakes for 3-year-olds, a wet day at Aqueduct only complicated matters in the $150,000 Jerome Stakes.

Aside from having to navigate a one-turn mile in search of qualifying points for the Kentucky Derby Presented by Woodford Reserve, the eight newly turned 3-year-olds had to cope with a sloppy sealed racetrack.

As it turned out, it was a regally-bred son of Tapit, Courvoisier, who thrived in the messy conditions, taking charge in the final furlong to record a 1 ¼-length victory in the 152nd edition of the historic Jerome.

“We didn’t know how he would handle the slop. Some Tapits run well on mud and grass. He’s been training well so we were hoping we were in the right place at the right time,” said trainer Kelly Breen, whose colt picked up 10 Kentucky Derby points. “We were going to skip this race and go to the Withers (Feb. 5 at Aqueduct) because it’s a two-turn race. It was a last-minute decision to run in the Jerome and we were fortunate enough to pick up (jockey) Jose Ortiz. It could not have been documented any better. Now the Withers will be next. He’s 2-for-2 at Aqueduct. It makes sense.”

Hill ‘n’ Dale Equine Holdings and James Spry’s Courvoisier was born to high expectations as he’s out of the champion Take Charge Brandi. Hill ‘n’ Dale co-bred the colt and retained partial ownership with Spry, and Courvoisier was green in his three starts, finishing second twice and third once. But that all changed when Breen ran him in a Dec. 2 two-turn 1 1/8-mile maiden race at the Big A, and Courvoisier quickly matured into a determined neck winner.

“He’s still green. He has a lot of talent. He’s been green around the barn and at the races and hopefully he puts his mind together. He’ll have to step up in every race after this, but judging by the way he’s been training, I think he can do it,” Breen said. “This was his most professional start. He’s had his game face on ever since he won his first race. Hopefully the light bulb went on and he’s turning into a racehorse.”

Hagler set the early pace in the Jerome, leading by a half-length over Courvoisier after a half-mile in a quick :45.78. When Hagler started to fade in the stretch, Courvoisier surged past and grabbed a half-length lead at the eighth pole and extended it in the final furlong.

“He’s a fighter,” said John Attfield, Breen’s New York-based assistant who saddled the 4-1 third betting choice. “You put him in a dogfight and he’ll win the dogfight.”

“I was a little bit concerned,” Ortiz said. “Personally, I’m not a fan of stretching to a mile and an eighth and cutting back to a mile, but he’s sharp. He’s got tactical speed – which helps him – and I think those kinds of horses you can play around with them. He’s the right kind of horse to do it and he did it successfully, so kudos to Kelly and the team.”

While Courvoisier picked up his initial 10 Derby points, the second through fourth finishers divided seven points.

Happy Tenth Stable’s Smarten Up, a son of American Freedom trained by Alfredo Velazquez, rallied from last to take second and collect four points. Cheyenne Stable’s Cooke Creek settled for third, three-quarters-of-a-length behind, and pocketed two points, and trainer Jeremiah O’Dwyer said that the post-time 1.45-1 favorite would target the Withers for his next start. Unbridled Bomber was fourth and netted one qualifying point.