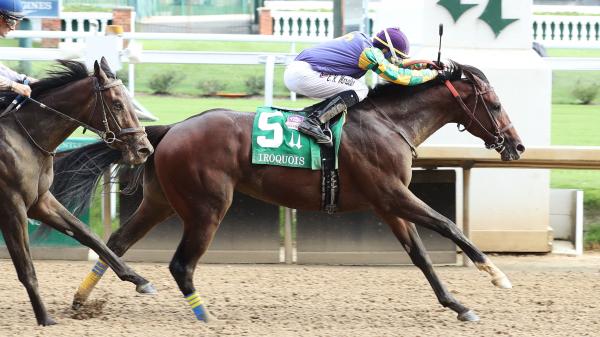 Whether rooting on his 2-year-old colt Curly Jack or his alma mater Notre Dame in a college football game, Mike McLoughlin cheered for winners Sept. 17. Shortly before Notre Dame defeated California 24-17 in South Bend, Ind., where McLoughlin spent the day Saturday, Curly Jack gave the owner his first taste of victory by rallying for a length score over Honed in the $299,250, Grade 3 Iroquois Stakes at Churchill Downs.

The colt’s 10.83-1 upset in the 1 1/16-mile race earned him 10 qualifying points toward next year’s Kentucky Derby Presented by Woodford Reserve at Churchill, with the race serving as the opening leg of the 2022-23 Road to the Kentucky Derby series.

It also allows McLoughlin and trainer Tom Amoss an opportunity to dream about another possible start, this one only a month and a half down the road – the Nov. 4 TVG Breeders’ Cup Juvenile at Keeneland Race Course.

“I don’t have an issue with running horses off a layoff so it won’t be a big deal going straight to the Breeders’ Cup Juvenile,” Amoss said. “We’ll see how he comes out of things and make a decision in the coming days.”

Amoss isn’t the only one that can think about the Juvenile. Runner-up Honed rallied to just miss, despite being keen between horses when last of nine in the early stages of the race. He finished a half-length clear of Jace’s Road in third.

The on-the-board finishers in Iroquois, as well as those from Saturday’s Grade 3 $297,536 Pocahontas Stakes for 2-year-old fillies at Churchill Downs, earned partial entry fees toward the Breeder’s Cup Juvenile and Netjets Breeders’ Cup Juvenile Fillies, respectively, with the races part of the Breeder’s Cup Dirt Dozen program.

Disappointing in the Iroquois were the race’s two favorites, Saratoga Race Course debut winner Echo Again, and Grade 2 Saratoga Special Stakes winner Damon’s Mound, both of whom were soundly beaten in their first two-turn starts. The 0.66-1 wagering choice Echo Again, who pressed the pace, ran seventh, and 2.74-1 shot Damon’s Mound was sixth after setting splits of :23.53, :47.48, and 1:11.66.

“I wasn’t expecting him to be on the lead but (jockey) Gabriel Saez said he was pretty aggressive out of the gate,” said Damon’s Mound’s trainer Michelle Lovell.

Settled was Curly Jack, who raced between 2 1/4 to 4 3/4 lengths off the pace under Edgar Morales, before the Good Magic colt rallied to take the lead by midstretch. He maintained a length’s advantage over the final furlong, and finished the 1 1/16 miles clocked in 1:45.62 over a fast track. He paid $23.66 to win.

When the colt was a close second last-out “in the Ellis Park Juvenile, he showed me he can relax well off of horses and come with one run. We were able to do that today,” said Morales, who notched his first graded stakes win. “He handled the extra distance well, and when I was able to get him outside he showed his best run.”

Later on the Saturday program, another mild upset took place when Lucky Seven Stable’s Fun and Feisty closed from 11th to take by the Pocahontas by 3 1/2 lengths over Shoplifter. Favored Grand Love, the pacesetter, settled for third.

“She’s trained like a good horse all along and acts like a good one at the barn,” McPeek said. “When she won going three-quarters of a mile I told the (Mackin family of Lucky Seven Stables) that we are going to have some fun with her, and this was just the start.

“She’s going to stretch out and go longer. She’s good-minded, sound, and healthy. I think you’ll see her around here for a couple of seasons. The  Grade 1 (Oct. 7) Darley Alcibiades will be the next spot for her at Keeneland.”