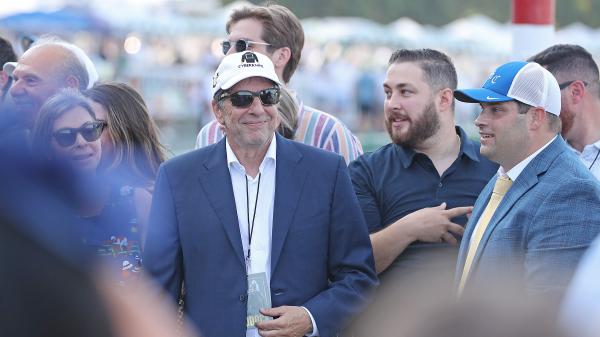 Owner Al Gold became known for providing his horses with whimsical names. Meet the Mets, Geaux Mets, and Cleon Jones saluted his favorite baseball team. Then there was My Italian Rabbi and Who Hoo Thats Me.

And now there is two-time Grade 1 winner Cyberknife, named after the non-invasive advanced radiation therapy that allowed Gold to return to good health after he was diagnosed with prostate cancer.

Gold was jolted when he received the diagnosis. “I worried about my family. That’s what you worry about. What’s going to happen to my kids? It’s scary,” he said. He and his wife, Hilary, have two children, Dayna, 34, and Bryan, 32.

Gold also is fortunate to have a tight-knit circle of friends united in their passion for racing and the many afternoons they spent handicapping races at their New Jersey home track, Monmouth Park, and elsewhere.

Ron Riccio, part of that fun-loving group, praised the way Gold dealt with the alarming news. “He handled it with great equanimity. He didn’t panic. He accepted it,” Riccio said. “No ‘poor me’ or any of that business. He did what he needed to do and got through it.”

Doctors outlined various potential treatments, including prostate removal. Riccio, an attorney who was then chairman of the board at Monmouth (N.J.) Medical Center, and Lou Filoso, another close friend, urged Gold to explore cyberknife, a treatment that delivers radiation to tumors that are hard to reach and even tracks their movements.

“It was a very good conversation I had with the doctors. They walk you through it,” said Gold, who is retired from the family’s real estate business.

Gold underwent five 18-minute treatments. “After that, I was fine. No symptoms, no nothing,” he said. “It was much better than all of the other scarier treatments for cancer.”

Gold is heartened by the development of Cyberknife, a son of 2017 Horse of the Year Gun Runner, into a serious 3-year-old that already has secured a pair of Grade 1 triumphs in the April 2 Arkansas Derby and the July 23 TVG.com Haskell Stakes at Monmouth. He did not fully enjoy the former. He relished the latter, which brought a fees-paid berth in the $6 million Longines Breeders’ Cup Classic on Nov. 5 at Keeneland.

Gold had intended to watch the Arkansas Derby in person. A mechanical issue with a jet he had chartered only added to his fear of flying, and he decided to watch the race on his iPad at his home in Delray Beach, Fla.

One problem. According to Tom Luicci, another close friend of Gold’s and the media director at Monmouth, the iPad froze as Cyberknife broke from the Oaklawn Park starting gate. Gold raced into his house. By the time he turned on the television and tuned in to the proper channel, he got a fleeting glimpse of his colt as he defeated Barber Road by 2 ¾ lengths.

After Cyberknife finished a disappointing 18th in the Kentucky Derby, he rebounded to take the June 12 Matt Winn Stakes at Churchill Downs and the Haskell for Eclipse Award-winning trainer Brad Cox. When Cyberknife rallied to edge Taiba by a head in the Haskell, it represented the fulfillment of a lifetime dream for Gold, a resident of Ocean Township, N.J. for more than 30 years.

“To come home and do this, what could be better?” said Filoso, adding, “Al is not an emotional type of guy but, boy, even Hilary, his wife, they were just off the charts. Greatest feeling ever.”

The taut victory in a track-record time of 1:46.24 for the 1 1/8-mile Haskell, gave Cyberknife his fifth victory in nine career starts. With the score in that Breeders’ Cup “Win and You’re In” race, Cyberknife’s career earnings soared past the $1.5 million mark heading into the $1.25 million Runhappy Travers Stakes on Saturday, August 27 at Saratoga Race Course.

Gold gives Cox and his staff credit for Cyberknife’s development since an unfortunate debut last Sept. 25 at Churchill Downs. “In the beginning, he was very green,” the owner noted. “He bumped into another horse and was disqualified his first race. In the second race, he bore out. But the talent was there, and they brought it out in him.”

There is much more to know about the self-effacing Gold, who will never speak of his generosity. “He really does have a huge heart,” Luicci said. “He’s helped so many people who are downtrodden and he’s never asked for anything in return.”

On a recent afternoon, Gold was found seated in a folding chair near the Saratoga paddock, wearing a battered Mets cap. He had turned over his private box to friends who were visiting.