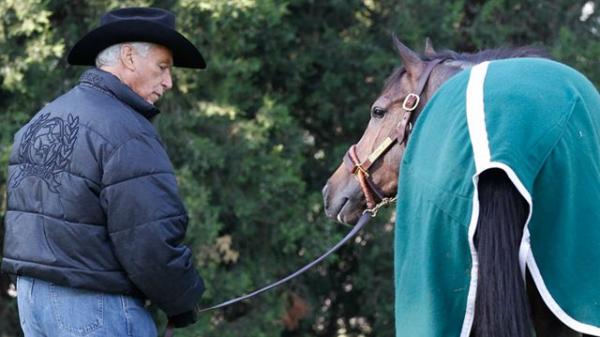 In the 1980s and 1990s, Pat Riley and Phil Jackson dominated the National Basketball Association coaching ranks, accounting for 10 championships between them. But during the same time frame another basketball coach was even more dominant than the two NBA legends, he just chose to ply his trade in a different sport.

D. Wayne Lukas was a lightning rod in Thoroughbred racing after he made the switch from Quarter Horses to Thoroughbreds full time in 1978, but like the aforementioned Riley and Jackson, Lukas for a long stretch was the dominant force in his sport.

The former hoops coach didn’t fit the prototypical mold of a Thoroughbred trainer in an industry steeped in tradition, and Lukas was viewed as using some unconventional methods when he made the switch to Thoroughbreds after a successful run in Quarter Horse racing.

“Everyone on the backstretch is watching me to see what I’ll do,” Lukas told Daily Racing Form at the time. “Maybe I’ll fall flat on my face, but I don’t intend to. The transition to Thoroughbreds has me more enthused than ever before … I like a challenge.”

Lukas rose to the challenge, indeed. With the support of some very influential owners, including Nelson Bunker Hunt, Robert Sangster, and John Gaines, it wasn’t long before he had his barn running as smoothly as the Showtime Los Angeles Lakers on a fast break.

From 1983 to 1992, Lukas led all U.S. trainers by purse earnings every year.  He won his first of 14 U.S. classic races with Codex in the 1980 Preakness Stakes, emerged as the dominant force in the Breeders’ Cup World Championships, and became the first trainer ever to surpass $100 million career earnings, a feat remarkably accomplished in only 13 seasons.

Lukas developed his passion for horses during his childhood. He spent his formative years on the 10-acre family farm in Antigo, Wisc., began buying horses at auction while he was in grade school, and regularly raced and performed tricks on the county fair circuit.

But there was a time when Lukas was convinced his future was in coaching. Lukas attended the University of Wisconsin, LaCrosse on a basketball scholarship, then took over the Blair High School team in Blair, Wisc., after graduation. He later served as an assistant to John Erickson and Johnny Orr at his alma mater while working toward his master’s degree. He impressed Orr with his attention to detail.

“He’d do anything you wanted,” Orr told Sports Illustrated. “If you told him to have a practice, he’d have it all laid out, very organized. When I got my first head coaching job at Massachusetts, I couldn’t take an assistant. If I could have, I’d have taken Wayne with me. I’ve read how immaculate his barns are. That’s him, boy! That’s the way he is.”

Lukas jumped at the chance to coach the Logan High School boys basketball team in LaCrosse in 1961. He maintained a string of horses during his tenure, getting up at 3 a.m. to take care of his stable before school and returning after practice, and enjoyed some memorable victories against rival LaCrosse Central. But after compiling a losing record from 1961-1967, Lukas decided to dedicate himself to training full time.

Renowned for his spotless barn and crisp, neat appearance as he rose to prominence, Lukas ran his vast stable like a well-oiled machine in the 1980s.

The path to the Racing Hall of Fame – he was inducted in 1999 – was not without bumps along the way. Lukas’ Mid-America Racing Stables went bust on the racetrack and financially, he struggled to balance the financial side of the business with his expert hands-on horsemanship during a tough stretch in the early 1990s. He weathered a tortuous emotional roller-coaster when 2-year-old Tabasco Cat (a future dual classic winner) crashed into his beloved son and top assistant, Jeff, in the stable area in a horrific December 1993 accident that left Jeff in a coma for nearly a month.

When Tabasco Cat won the Preakness in May 1994, D. Wayne Lukas tearfully dedicated the win to Jeff, who made a remarkable recovery but never was able to return as his dad’s top assistant. Jeff Lukas had talked about going out on his own as a trainer one day, but sadly that opportunity was taken from him. (Editor’s note: Jeff Lukas later passed away in 2016 at the age of 58.)

D. Wayne Lukas nonetheless, left a lasting legacy not only as a trainer but as a mentor, not unlike his close friend Bobby Knight, a 2011 inductee into the College Basketball Hall of Fame whose protégés include Mike Krzyzewski.

Like the aforementioned Pat Riley, Phil Jackson, and Bobby Knight, this former coach’s name is forever etched in the history books as one of the legends of horse racing.

Note: this article was originally published in 2017 and has been updated.

2022-05-10
Previous Post: Dallas Official Sues Civic Agency for Allowing Poker Club to Remain Open
Next Post: Figuring It Out – Gambling With An Edge