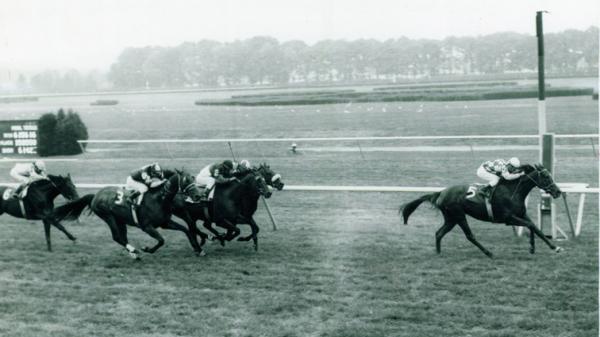 The year 1973 is best remembered for the Triple Crown heroics of Secretariat.

Yet that same year also gave American racing fans their first glimpse of another great champion of that era.

Long before females like Zenyatta, Rachel Alexandra, and Havre de Grace defeated males in their Horse of the Year campaigns, Dahlia showed how formidable a filly could be at any level of competition. Her success in the United States also made it fashionable to ship top-notch Europeans fillies and mares to the United States for major races. A champion both in Europe and the United States, Dahlia is considered the first filly to crack $1 million in earnings and was enshrined in the Racing Hall of Fame in 1981.

Owned by American Nelson Bunker Hunt, whose family made its fortune in the oil and mining industries, and trained by Frenchman Maurice Zilber, Dahlia was a regally-bred daughter of Vaguely Noble who started her career in Europe. She won her career debut as a 2-year-old at Deauville in France on Aug. 6, 1972, but suffered through three losses before claiming her first group stakes win when she captured the Group 3 Prix de la Grotte at Longchamp.

That victory capped her 2-year-old season and put the foundation in place for a demanding 3-year-old season. In her eight European races, Dahlia ran in seven Group 1 stakes and won three of them. The topper was a six-length victory against males in the prestigious King George VI and Queen Elizabeth Stakes at Ascot. The runner-up that day was no less of a rival than Rheingold, who would win that year’s Prix de l’Arc de Triomphe.

In his book “Legacies of the Turf: A Century of Great Thoroughbred Breeders,” Ed Bowen included a report by Tony Morris in “The Bloodstock Breeders’ Review” that lavished praise on Dahlia for her remarkable win in the King George.

“This was no defeat for the males,” Morris wrote. “It was humiliation. They dictated the pace that destroyed them. They broke under the ferocious pressure. They were devoured by the filly who bided her time in the rear until that explosion of killer pace made her Ascot performance one of the greatest ever seen – anywhere. Secretariat fans may write to me c/o The Bloodstock Breeders’ Review.”

Dahlia also ran in the 1973 Arc de Triomphe, but turned in an inexplicably weak performance and finished 16th in a field of 27.

In those pre-Breeders’ Cup days, there were few opportunities for Europeans in Americans stakes but a prime objective was usually the Washington D.C. International at Laurel Park. Following Dahlia’s disappointing effort in the Arc, Zilber and Hunt elected to send her to America as part of the international contingent in Laurel’s mile-and-a-half test.

Among her rivals in that Nov. 10, 1973 test was Big Spruce, who was coming off a runner-up finish to Secretariat in the Triple Crown winner’s final race, the Canadian International at Woodbine.

As it turned out, Big Spruce wound up as second-best to both Secretariat and Dahlia that year as the French filly pulled away in the stretch to win by 3 ¼ lengths over Big Spruce with Scottish Rifle third.

Voted Europe’s champion 3-year-old and the United Kingdom’s Horse of the Year in 1973, Dahlia blossomed at 4. After starting the year slowly, losing her first three races, Dahlia reeled off three straight Group 1 wins, including an encore win in the King George.

A narrow loss in the Prix de Prince d’Orange at Longchamp convinced Silber to skip the Arc and map out a return trip to the United States.

This time she arrived in October and was entered in the Grade 1 Man o’ War at Belmont Park. Sent off as a 2-1 favorite, she registered a two-length victory over Crafty Khale and London Company.

She then headed north to Woodbine and captured the Canadian International by a length over her old rival from a year ago, Big Spruce.

She took aim at back-to-back wins in the D.C. International but finished third behind 31-1 shot Admetus, a French gelding, and Desert Vixen, who was the Eclipse Award winner in 1973 as North America’s top 3-year-old filly.

Despite the setback, Dahlia received the Eclipse Award as 1974’s turf champion. At the time, there was only a single Eclipse Award for grass specialists.

Dahlia raced for two more years, but failed to return to her brilliant form at 3 and 4. In 1975, she won only one of nine starts in Europe and then was unplaced in both the Canadian International and Washington D.C. International.

At 6, she spent the entire year in the United States under the care of Hall of Fame trainer Charlie Whittingham. She ran 13 times, including four tries on dirt, and posted two wins, highlighted by a half-length score in the Grade 1 Hollywood Invitational Handicap.

Her final two seasons left Dahlia with a career record of 15 wins and three seconds in 48 starts, but what stood out more than the number of her wins and best reflected her class was her status as the first filly to earn more than $1 million. She closed her career with earnings of $1,543,139 and a reputation as one of her generation’s best turf runners – of either sex.

Note: This story was originally published in November 2016 and has been updated.