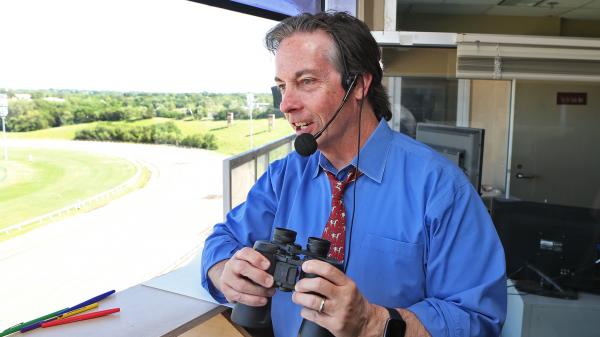 Dale Day: The Passionate and Prepared Voice of Remington Park

On opening night at Remington Park in August, Dale Day sits atop his Oklahoma perch. That’s a nest that can be a lonely spot, as Day peers through the binoculars from the announcer’s booth. But Day has his share of company; there are equine athletes hearing his call over the loudspeakers, and every now and then, humans listen as well. Day speaks with an even tone, whether it is one on one or to the multitude. If he needs exhilaration for a stretch run, it’s at the ready. You can tell that he is passionate about the sport of horse racing, whether it’s Thoroughbreds or Quarter Horses.

Track announcers have always had a unique perspective on how a race unfolds because they are pretty much the only one around the track that sees what no one else does, constantly. The preparation it takes to be ready to describe such an event demands that you know the players involved. Some “callers” use colored pencils and lists adorned with the corresponding silks of the riders. Day explained that he is blessed with a sharp memory. After nearly 20 years in the booth at Remington, he has yet to break out the famous pencils. “I’m getting up there in age, but will stick to my process, and it hasn’t failed me yet,” Day said.

He doesn’t just call races, which is no easy chore, Day also takes an active role in the handicapping experience. A lifelong student of the game, he enjoys tinkering with the Daily Racing Form, and trying to figure out every puzzle. Originally from Bellefontaine, Ohio, about 45 minutes north of Dayton, he grew up wanting to be a sportscaster.

“I wasn’t much of an athlete, and it was a way to be a part of something really interesting,” Day said with a spark. In the early 1970s, he listened to a young Al Michaels on WLW during those radio days, when the Big Red Machine was just tuning up. Day was heavily influenced by the Reds’ Marty Brennaman, who just ended his career after a 46-year run at the mic in 2019. In college, the future voice of Remington Park figured out that engineering wasn’t for him and going into broadcasting would suit his passions.

Starting out in radio by the fall of 1993, Day was hired by Remington as a media office assistant. Part of the job included hosting a cable morning show, which offered a preview of the races. It was his first stab at public handicapping.

“Back in those days tip sheets were sold, and remember that it’s pre-internet, so part of the job was to go up to the suites and assist people with picks,” he explained. Folks didn’t necessarily want to hear long explanations concerning speed figures, horses turning back in distance, or trainer-jockey statistics. “They just wanted to know,” Dale chuckled, “who I thought was going to win.”

Once the Remington Casino opened, the fundamentals of the racetrack changed. Admission and parking fees were waived, and a new era began.

In 2004, Day was elevated to the role of track announcer, but he did not leave his handicapping hat behind. Always looking for new angles and ways to see races differently, the trip upstairs was a new experience.

“Everyone that does this has their own process, and mine is to get all the names right,” he said. “I think if I can do that, then I can build a story from there.” Day enjoys having all of the players change every 25 minutes because it keeps things interesting and, like he says, “It’s still a sport.”

As his handicapping morphed over the years, some tried and true methods rose to the surface. Through those binoculars of his, he could see trouble as it happened. A horse that was forced to the rail or a jockey that missed an opening were details he witnessed. “After every race, I make a few notes, and that goes into the trip book,” Day said. “I cannot remember them all, but it comes in handy next time around.” Looking for those troubled moments is what trip handicapping is all about, and Day’s gotten good at it over the years.

This skill set came in handy early in 2022 when Day competed in his first NTRA National Horseplayers Championship (NHC). As a rookie, he earned a ticket to Las Vegas by winning what is called a feeder tournament. Throughout the year, horseplayers try to qualify, earning a seat at the table in what amounts to a three-day event attended by more than 500 individuals who are after a piece of more than $3.5 million in prize money. With mythical “win” and “place” bets, players make $2 wagers on one horse in races that are running live across the country. “The camaraderie there is very special, and instantaneous,” he said, “but it is pressure packed, you can easily get behind, and it seems like you are out of it.”

On several occasions over the first couple of days, Day told his wife that he was cooked. His beloved Cincinnati Bengals were playing Sunday in the playoffs, so at least he wouldn’t miss that. “It was funny, she would come down, and all of a sudden I would be picking nicely priced winners,” Dale said with a smile. “I didn’t want her to leave because I started to turn things around.” With some choice selections, like the D. Wayne Lukas-trained Ethereal Road at odds of 19.60-1, he ended up at what is called the “Final Table” on Sunday, Jan. 30. Football would have to wait.

Day went home with an impressive 10th-place finish at the 2022 NHC, which netted him a check for $50,000. It was a good weekend of picking races, plus the Bengals came back and won.

“It just makes you want to go back and experience it all over,” he said.

Even though he has yet to qualify for next year’s NHC, Day isn’t overly stressed because right now he is focused on Remington’s Thoroughbred meet. “It’s a long season, and you have to pace yourself properly,” he said. With his perspective through the binoculars and his voice through the microphone, Dale Day’s career continues apace. Like the horses he picks, he’s not done yet. There’s always another race …