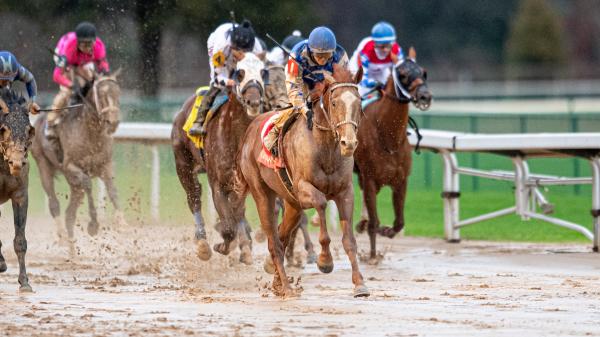 Trainer Kenny McPeek, coming off a career-best year by earnings in 2021, might be poised for an even better 2022 judging by the way Jan. 1 went.

New Year’s Day began with two of his Kentucky Derby Presented by Woodford Reserve hopefuls, Smile Happy and Tiz the Bomb, recording easy three-furlong breezes at Gulfstream Park. Next, the trainer attended the Citrus Bowl in Orlando, Fla., with his family and watched his beloved Kentucky Wildcats defeat the Iowa Hawkeyes in football. And then he got back to business, watching from afar as his colt Dash Attack won the $250,000 Smarty Jones Stakes at Oaklawn Park, further strengthening his hand of leading Derby prospects.

As if that’s not enough, McPeek has yet another Derby threat, Rattle N Roll, nearing a return to breezing in the coming weeks.

Though Dash Attack is not yet a graded winner like that trio, he proved his quality in the Smarty Jones, a Kentucky Derby qualifier that offered points on a 10-4-2-1 scale to its first four finishers. Of the four major 3-year-old dirt stakes across the country Saturday, the Smarty Jones was the deepest, going to post with 13 newly turned sophomores after one scratch.

It was just one horse – the rail-drawn Dash Attack – that starred, however, on a rainy day at Oaklawn in the slop, rallying from eighth and pulling clear by two lengths late over Barber Road.

Ignitis nipped Kavod in a photo for the show.

“He broke a little flat-footed today, but was able to work out a pretty good trip,” winning rider David Cohen said. “I had to move a little earlier than I would have liked. I like to be a little more patient with the horse, but given the short stretch, it was the time to go and I saw one opportunity to get out (of traffic). I pointed him in that direction and got that so-called slingshot effort. He really turned up his game and turned on the power.”

Dash Attack, a son of Munnings owned by Richard Greenberg’s Catalyst Stable, Sherri McPeek’s Magdalena Racing, Kevin Pollard, and Patty Slevin, raced a two-turn mile in 1:39.44. His rally was fueled by a demanding early pace set by Ben Diesel  and Ruggs, who set fractions of :23.03,:46.38, and 1:12.34. That duo weakened to finish seventh and eighth, respectively.

“I’m just really pleased with the job David and my team did over there. Just an impressive run by that colt,” McPeek said. “Look, he’s still just figuring it out, this horse. I knew he would come from off the pace. I saw that he got off a little awkward. I just didn’t want David to rush things and it looked to me like he started to, but then as the race unfolded, he kind of ended up in a pocket for a while. But good horses overcome things and he’s done that, for sure.”