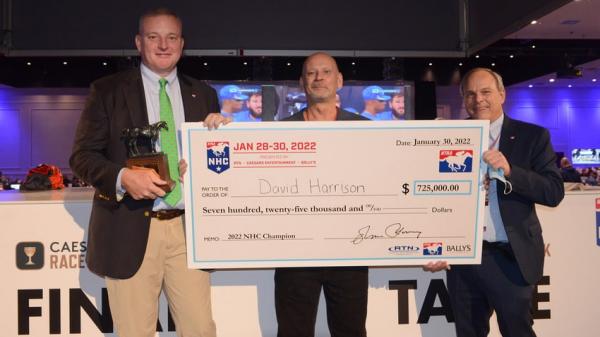 David Harrison of Webster, N.Y., topped a field of 643 entries to win the $725,000 first-place prize and an Eclipse Award as Horseplayer of the Year at this weekend’s 23rd annual National Horseplayers Championship (NHC) presented by Racetrack Television Network, Caesars Entertainment, and Bally’s Las Vegas.

Harrison amassed a winning score of $342 over the three-day tournament from 53 mythical $2 Win and Place bets – 18 on Friday, 18 on Saturday, 10 in Sunday morning’s Semifinal round, and seven at the climactic Final Table presented by Caesars Sportsbook and Global Tote, A BetMakers Company.

The 63-year-old Harrison, who makes his living as a real estate appraiser and collateral analyst, held a $30.30 advantage over A.J. Benton and the rest of the field entering the Final Table.

Despite a tightening of the TVG Leaderboard from the first six of seven Final Table races, Harrison did enough to hold off his rivals late.

“This is an absolute life-changing score,” Harrison said. “I’m a middle-class, middle-income, hard-working guy. This is going to help me hopefully retire a little bit earlier than I’d planned. I’m totally overwhelmed and don’t even know what else to say.”

The contest came down to the Baffle Stakes at Santa Anita Park – a 6 1/2-furlong turf sprint for 3-year-olds – with Harrison $16.60 ahead of Benton and $17.20 to the better of Ryan Patrick Scully. The other seven were at least $44 from the top.

“The guys in second and third only had a few options,” Harrison said. “Don’t Swear Dave went up to 4-1 and I thought, ‘If I don’t have that horse they could nip me. And my name’s Dave! I can’t let that horse beat me.’”

Even-money favorite Maglev hit the lead in upper stretch and drew off easily. To slam the door shut, Don’t Swear Dave closed for second, making it impossible for anyone to catch Harrison. As Maglev opened up Harrison did not wait to see him hit the wire before raising his arms in triumph and leaving the stage to celebrate with his friends in a far corner of the ballroom.

Harrison started the day in 14th and made his big moves in the morning’s Semifinals round. At the Final Table, no player moved more than one position.

“My goal was to creep up and I hit my first couple of races,” he said. “Then the one that really got my confidence up was the horse at Laurel – Let Me Finish. Every time I get into a discussion with my wife she’s always telling me that – let me finish. That was one of my hunch plays and that’s probably the reason I won.”

Harrison has been handicapping since the late 1970s, when he would frequent Belmont Park, and credits the late New York Racing Association broadcaster and handicapper Harvey Pack for teaching him how to handicap. After the trophy presentation, Harrison tossed his Daily Racing Form in the air in tribute to Pack.

By virtue of his victory, Harrison also earns an exemption into next year’s NHC and a berth to the 2022 Breeders’ Cup Betting Challenge worth $10,000.

The full NHC and Consolation Tournament standings can be accessed at NTRA.com.

The NHC was held for the third straight year in the historic Bally’s Event Center, which for three days was transformed into the world’s largest race and sports book. The next NHC in 2023 will be at the same property but it will bear a new name, Horseshoe Las Vegas.

The NHC finals awarded cash prizes to 64 players – the top 10% of finishers – from a total cash prize purse of $2,339,550. An additional $50,000 went to the top 20 in today’s Consolation Tournament. Including $355,000 paid out to top finishers in the year-long NHC Tour, NHC Tour travel awards, RTN subscriptions, and the $10,000 Charity Challenge tournament prize, plus $30,000 worth of Breeders’ Cup Betting Challenge prizes in the form of entry fees, airfare, and hotel, the aggregate value of payouts this weekend in NHC cash and prizes totaled $3,568,592.

The 2022 NHC was the culmination of 310 qualifying contests held online and at racetracks and OTBs in 2021. From those contests, there were 44,553 entries played in hopes of making it to Bally’s Las Vegas.

The NHC is the most important tournament of the year for horseplayers and is the culmination of a year-long series of NTRA-sanctioned local tournaments conducted by racetracks, casino race books, off-track betting facilities, and horse racing and handicapping websites, each of which sends its top qualifiers to the national finals. There are no bye-ins to the NHC. Each year, the NHC winner joins other human and equine champions as an honoree at the Eclipse Awards. For more information on the NHC, visit NTRA.com/nhc.