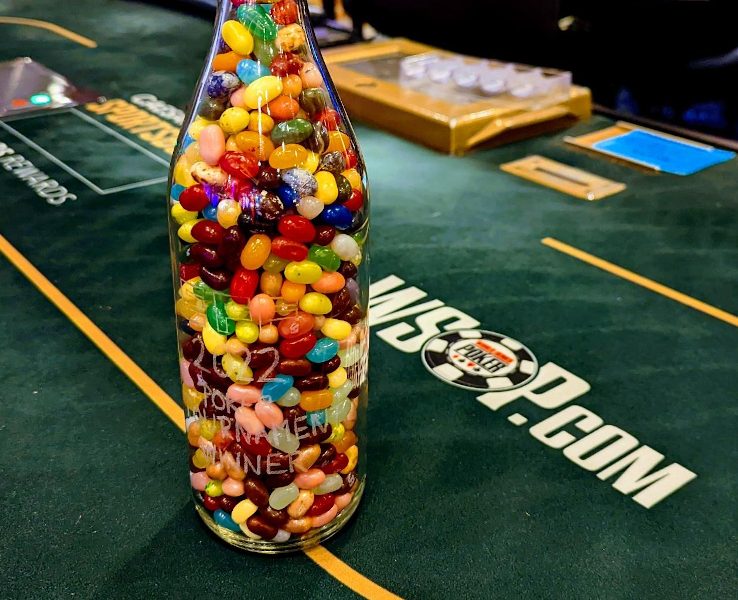 A shooting in a casino, digital security experts playing poker for jelly beans and justice, and PokerStars losing an ambassador are some of the short stacks CardsChat picked up in its latest orbit of poker news.

The Electronic Frontier Foundation raised $12,500 in a poker tournament held during the Def Con computer hacking and security conference, which is designed to “ensure that technology supports freedom, justice, and innovation for all people of the world.”

Billed as the “largest hacking conference in the world,” Def Con brought about 25K people to Vegas last weekend for seminars and events, including a poker tournament held at Bally’s and hosted by security expert and EFF advisory board member Tarah Wheeler, whose father is poker player Mike Wheeler.

Tarah is also a poker player who happens to be one of the world’s experts in cyber security.

It was the first poker tournament held by the non-profit, which was founded in 1990. It attracted 35 players and was won by Josh “BinaryFaultline” Hawkins (that’s his hacker name, not his online poker persona). Hawkins’ prize? A trophy made from an engraved jar filled with jellybeans because those were what were used as chips when Mike Wheeler taught Tarah to play poker.

German online professional Benjamin “BenCB” Rolle, the founder of the poker instruction site Raise Your Edge, announced he is no longer a member of Team PokerStars.

I am no longer a part of Team Pokerstars. I want to thank @PokerStars for trusting me and allowing me to become an ambassador for them. Now its time to focus on all the exciting projects ahead.

It seems like the departure was mutual, as PokerStars wished Rolle luck and thanked him for his work over the past year via Twitter, which is how just about how long he was an ambassador to the site.

Rolle, 33, has been a high-stakes online player since college. His biggest score came in a $102K super high-roller event on PokerStars in 2016 where he won $1.1 million (after making a heads-up deal with Fedor Holz).

Rolle managed to remain anonymous until he revealed himself when he launched Raise You Edge in 2019. He streams his play through his Twitch channel.

It’s safe to say, Europeon Poker Tour officials are pleased with the turnout they received in Barcelona this week.

Just days after the Estrellas Poker Tour Main Event attracted 6,313 entrants to become the largest single event in EPT history, the €5,300 EPT Barcelona Main Event set its own record by becoming the tour’s largest main event on record. With two Day 1s — and a healthy number of online qualifiers through PokerStars — the tournament saw 2,294 entries and built a prize pool north of $11.1 million.

That’s 306 more players than the previous record, which occurred in 2019, also in Barcelona.

The winner, who will be crowned on Sunday, will take home $1.7 million.

Live and online gambling has long been legal in Peru, but the activities haven’t been regulated and taxed. Last Friday, Peruvian President Pedro Castillo signed a law that establishes a regulatory framework through the Ministry of Foreign Trade and Tourism (Mincetur).

The law covers online gambling and sports betting, but doesn’t include anything about poker.

Peru has issued online casino licenses since 2008, but is still just beginning to see its industry potential emerge. The country estimates $42.5 million in tax revenue annually as a result of the new law, which the government says will be used for responsible gambling initiatives, anti-money laundering protections, and other social benefits.

Online poker is legal in Peru, and at least for now will remain untaxed.

Two people were injured during an attempted robbery at Wildhorse Casino in Pendleton, Oregon, on Wednesday.

According to Oregon Public Broadcasting, a man with a gun attempted to rob the cashier’s cage around 1 pm, but was met by members of the Umatilla Tribal Police Department and casino security. A brief shootout occurred during which the suspect and a bystander were shot.

The bystander was an employee of the Pendleton School District, which was holding an event for its staff on the property. The shooting victims were taken to a local hospital and there’s been no word on the condition of either person at the time of publication.