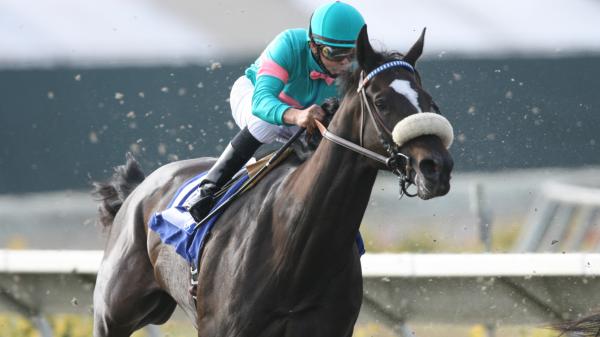 During her legendary 19-race win streak, the Hall of Fame mare Zenyatta had more than a few close calls where she seized victory from the jaws of defeat. It was to be expected – her late-running style usually ensured that she took the lead very late in her races, resulting in heart-pounding finishes that both concerned and delighted her numerous fans.

But it is hardly a coincidence that three of Zenyatta’s closest finishes came in her three races at Del Mar, a track that then featured a synthetic racing surface that could be unpredictable depending on the weather and time of day. With this in mind, it’s all the more remarkable that Zenyatta went undefeated at Del Mar, scoring three straight victories in the prestigious Clement L. Hirsch Handicap.

Her first triumph in 2008 was certainly the least dramatic. Coming off of a hard-fought win in the Grade 1 Vanity Handicap, some were questioning whether Zenyatta – then unbeaten in six starts – was vulnerable to an upset. In addition, the weights assigned in the Clement L. Hirsch required Zenyatta to carry 124 pounds, five to 12 pounds more than her seven rivals. But with regular rider Mike Smith in the saddle, Zenyatta unleashed a tremendous rally in the final furlong to win by a length while eased up.

Things wouldn’t be as easy in 2009. While Zenyatta trailed the field as usual, staying right within striking range of her main rival and fellow late runner Life is Sweet, the leaders were waltzing along through slow pace fractions of :48.84 and 1:13.64. Turning for home, Zenyatta had a lot of ground to make up, but with Smith riding confidently, Zenyatta got up in the last stride to win by a head.

“She really was running easy,” Smith told BloodHorse after the race. “Her ears were pricking back and forth and she was just loping. … I knew we had to get busy at the finish. When we got right near the wire she hit another gear. Then when we crossed and I stood up she hit another gear. On the gallop out she was drawing away. … When we pulled up she was hardly blowing at all.”

Although the Clement L. Hirsch Stakes has been run consistently since the early 1970s, until Zenyatta came along no mare had succeeded in winning the race three times. But Zenyatta’s attempt at a three-peat was not without pre-race drama; as told by Steve Schuelein in the Aug. 14, 2010, edition of the Thoroughbred Times, “Trainer John Shirreffs fretted all week about a surface over which [Zenyatta] survived her narrowest margin of victory in the same race last year … and created suspense as to whether she would start.”

But start she did, and after reaching the lead earlier than usual – swooping into contention at the top of the stretch and taking command just past the eighth pole – Zenyatta won by a neck while seemingly keeping something in reserve.

With history complete, Zenyatta paraded in front of the 32,536 fans that had turned out to witness history and get a look at one of the greatest mares to ever grace a racetrack. Even Eric Reed, the trainer of the narrowly-beaten runner-up Rinterval, considered the day to be a success. “It was a great day for me and my horse,” Reed noted in the Aug. 14, 2010, edition of BloodHorse, “and a great day for the champ.”

This story was first published in 2017 and has been updated.