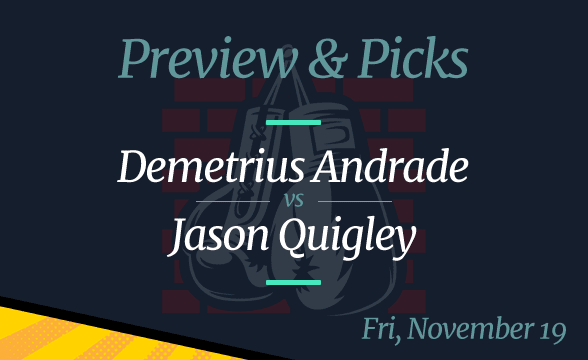 WBO middleweight world champion Demetrius Andrade will go toe to toe with challenger Jason Quigley on Friday, November 19, at New Hampshire’s SNHU Arena. Considering that a championship belt is at stake in this bout, you can be sure that both boxers will give their very best.

Still, the oddsmakers don’t seem to think Quigley’s best can bring him the title. Instead, they believe the title will stay in the possession of its current holder.

All odds are per FanDuel as of November 18.

Andrade is still without a single loss in his professional career with a 30-0 record. Early on in his career, the American was known as a knockout machine. In fact, he won seven of his first ten bouts by KO/TKO.

Over the years, however, he adjusted his fighting style, turning into a patient pugilist who knows how to keep his nerves. Thanks to the ability to stay calm, Andrade was able to outsmart a number of high-profile opponents, which brought titles his way.

It was October 2018 when he was given a shot at the then-vacant WBO middleweight title, which he took by defeating Walter Kautondokwa.

A few months later, Andrade had to defend the title for the first time. His opponent was Artur Akavov, but Andrade defeated him by TKO. The champ then went on to defend the title on three more occasions, beating Maciej Sulęcki, Luke Keeler, and Liam Williams.

Quigley Hoping for a Lucky Punch

Quigley is 19-1 in his professional career and already has several titles in his cupboard, including the WBO–NABO middleweight title. The win happened in the most recent fight he had – against Shane Mosley Jr., which took place in late May.

Although his record is pretty impressive, there’s one fact that needs to worry Quigley – he still hasn’t fought such a boxing maestro as Andrade.

Comparing the two, the American boxer seems superior in practically all aspects. Still, the fighter from the Emerald Isle does have an iron fist.

Known for his fast hands and powerful punches, the Irishman won 15 of his 19 wins by knockout. Incidentally, the same was the method by which he lost his only fight.

It only takes one lucky punch for Quigley to win the fight. Still, knowing who his opponent is, it’s very likely luck won’t be on the side of the Irish fighter. Instead, the most likely scenario is that the American champion will be able to retain the WBO middleweight title in his possession.