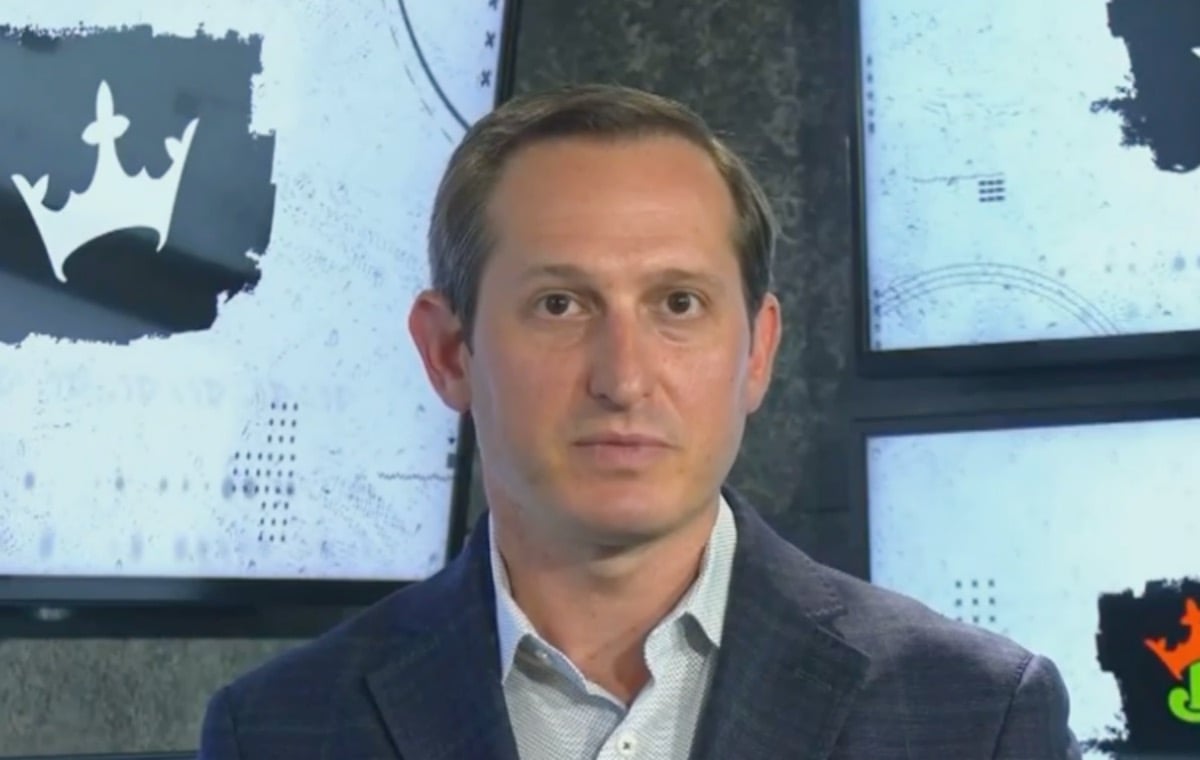 With his company’s stock mired in a six-month freefall, DraftKings Chairman and CEO Jason Robins lashed out on Twitter Tuesday night with a provocative message aimed at those who traded away shares in the sports entertainment, gaming, and technology company earlier in the day.

DraftKings CEO and Board Chair Jason Robins in an interview last September with CNBC. Since last September, shares of DraftKings have dropped by more than $46. On Tuesday night, Robins said the company would work to make people “regret” selling their stock. (Image: CNBC)

After a slight uptick late last summer at the start of the football season, when it got up to $64.50, the stock has trended downward ever since.

Tuesday’s closing price marked the seventh straight decline for DraftKings, which had enjoyed a brief respite after hitting the 52-week low. As recently as March 1, shares reached $25.01.

If you sold #DKNG today, just be aware that my team and I are on a mission to make you regret that decision more than any other decision you’ve ever made in your life,” Robins tweeted just before 8 pm ET Tuesday night.

The tweet comes a day after Argus analyst John Stazak moved his recommendation on DraftKings to “hold,” as he no longer considers it a target for buying.

If you sold #DKNG today, just be aware that my team and I are on a mission to make you regret that decision more than any other decision you’ve ever made in your life

In addition to being the chief executive and chairman, Robins co-founded the company along with Paul Liberman and Matt Kalish a decade ago. It stood as a pioneer in the daily fantasy sports business, DraftKings parlayed that success. DraftKings then transitioned into sports betting after the repeal of PASPA created new markets across the US.

Operating in 17 states, DraftKings has emerged as one of the giants in the still relatively new sports betting industry. It competes with FanDuel, Caesars Sportsbook, and BetMGM as national market leaders in sports wagering. In addition, it also offers iGaming, where that’s available.

At its current price, DraftKings is trading lower than when it officially became a public company on April 24, 2020. The company went public after it announced a merger with Diamond Eagle Acquisition, a special purpose acquisition company created in May 2019.

Even with few betting options available in the spring of 2020 due to COVID-19, DraftKings shares started a sharp climb. Then, after a brief dip in the fall of that year, the stock began to rise again.

But the main concern about the company is whether it can turn a profit. Last month, when the company announced its fourth-quarter and year-end 2021 financials, it reported that year-to-year revenue more than doubled to $1.3 billion. However, thanks to marketing costs that nearly doubled and other increasing costs, the company’s adjusted EBITDA was a net loss of $676.1 million for 2021.

On top of that, the company announced that the expected adjusted EBITDA for this year would likely land between $825 million and $925 million. Much of that, company leaders say, is tied to launching in New York and Louisiana.

A significant driver of those losses has been the cost to acquire customers and gain market share. The company is hopeful to turn a profit starting in the fourth quarter of 2023.

Who Got the Message?

Robins venting his frustrations is certainly understandable as DraftKings’ stock price continues to trend in the wrong direction. However, doing it on Twitter may not strike the right tone, especially since it doesn’t seem to be the forum for serious investors.

Then, there’s the “make you regret” line. For some, buying DraftKings stock may be their first venture into the market. Novice investors shouldn’t be bullied into keeping a stock at any time. That rings especially true when high inflation and rising gas prices are fueling economic uncertainty. For some, they may need to cut and run in order to get by for now.

Those probably aren’t the investors Robins was targeting in his tweet, but they heard the message loud and clear anyway. It’ll ring in their head just like the people who bring up the price of Apple stock was in December 1980 when it went public. Or when Microsoft’s IPO hit in March 1986.

They also likely heard his “It’s only a loss if you sell” response to another tweet.

It’s only a loss if you sell