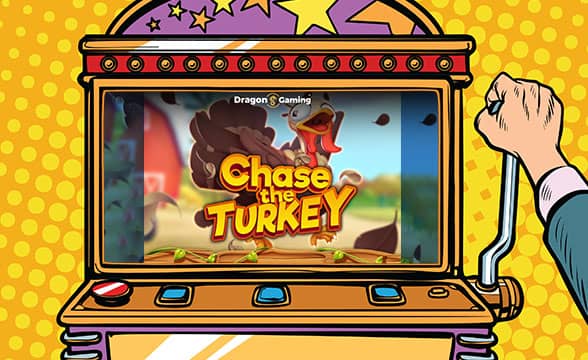 Dragon Gaming has launched Chase the Turkey just in time for the upcoming Thanksgiving holiday next week. Players who are still looking for the perfect turkey can start practicing their bird-catching skills by playing the studio’s freshest release while potentially winning just enough to buy turkeys for the entire neighborhood. The high volatility game comes with a standard 5×3 grid, counts 27 paylines, and introduces players to a plethora of exciting bonus features such as free spins and turkey wilds.

Last week, the studio that produces gaming products meant to improve player engagement announced the release of the new game cooked in its kitchen by experts using its social media. Players were openly invited to put themselves in the shoes of the farmer trying to catch and prepare a traditional Thanksgiving meal for his family. The studio described the endeavor as “challenging” but “far from impossible” as long as a little bit of luck is involved.

Join the Fun Action at the Farm

The engaging action of the lighthearted game is, therefore, placed at an animal farm where players are challenged to match identical symbols on the grid and engage the available bonus features for greater wins. The slot has been designed in a cartoonish manner with all the elements you would find at a farm, including tractors, barns, and flowers, setting the whole farm atmosphere. The wild symbol in the game is represented by the turkey, while the Game Logo represents the scatter symbol. The Farmer together with the Farmer’s Wife, the Farmer’s Kid, Corn, Carrots, Pumpkins, and A-9 wooden royal symbols are the rest of the symbols available on the grid.

Scatters trigger the free spins bonus round. Seeing expanding wild symbols popping in a random manner will trigger a winning combo. The game is presented as being perfect for new players in search of a fun time online.

Wild symbols popping on the grid will act as replacements for the rest of the symbols except for the scatters. The wild symbol can, nonetheless, also expand in a random manner in such a way as to completely cover an entire reel while boosting players’ odds of landing a massive prize. While the turkey’s attempt to escape the chase will sometimes be a successful one, on other occasions, the bird will land straight into the arms of the farmer’s child.

A minimum of three bonus symbols trigger a free spins round where players can enjoy 12 free spins, multipliers, and additional expanding wilds. When the Wild Symbols land on the first, third, or fifth reel, each spin is guaranteed to see between one and three Wild Symbols. Based on the number of Wild symbols found on the reels, players receive a win multiplier of x3, x5 or x7.