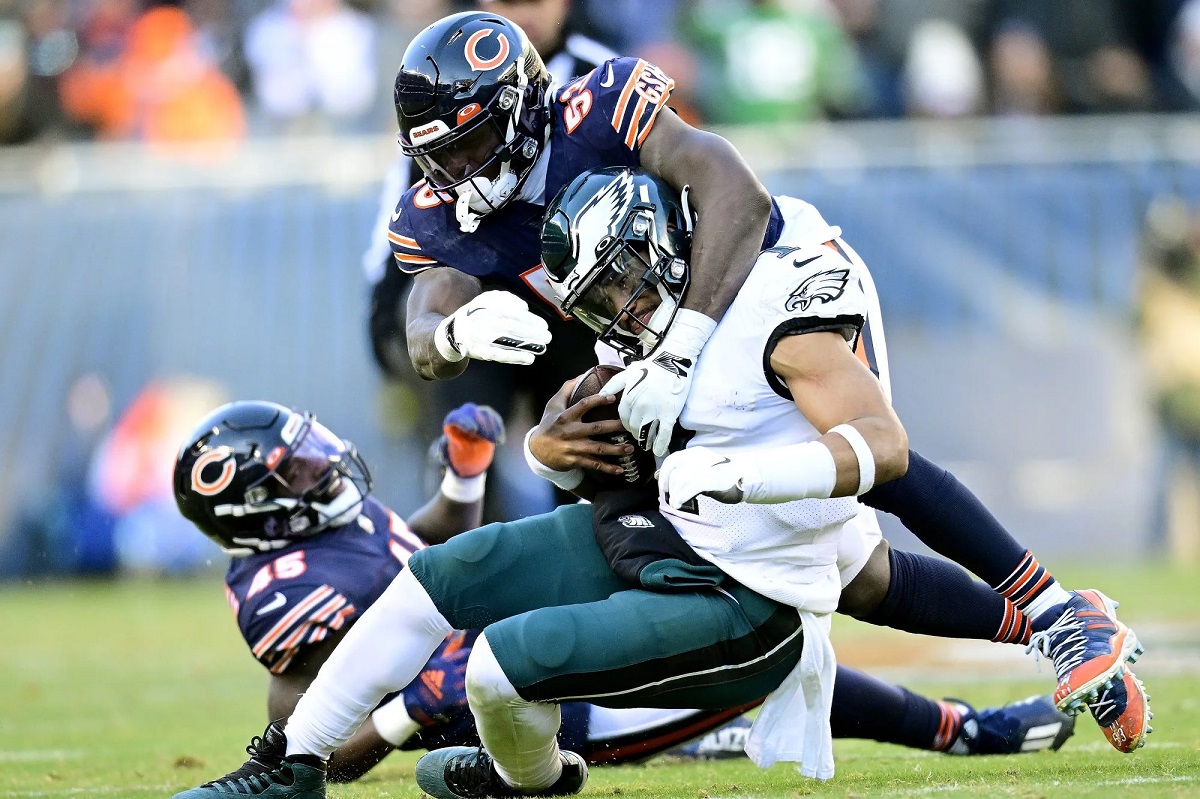 Philadelphia Eagles quarterback Jalen Hurts suffered a right shoulder injury against the Chicago Bears on Sunday, and news about the sprained shoulder had an immediate impact on multiple betting markets on Monday including Super Bowl futures, NFL MVP odds, and the point spread in the upcoming Eagles versus Dallas Cowboys game on Christmas Eve.

The Eagles edged out the Bears, 25-20, in Week 15 in a game that was closer than it should’ve been. The Bears were +8.5 home dogs and beat the point spread, but could not pull off an upset to end their losing streak. The Eagles improved to 13-1 on the season, including 7-0 on the road. The Bears are now 3-11 and their skid extended to seven losses in a row.

Bears defensive end Trevis Gipson drilled Hurts late in the third quarter after he rushed for three yards. It took Hurts a while to finally get up after the tackle, but he did not exit the game. He played through the pain, and completed 22-for-37 passes for 315 yards and zero touchdowns. Hurts did most of his damage on the ground by rushing 17 times for 61 yards and three touchdowns.

The victory came at a huge cost to the Eagles, especially if Hurts has lingering effects from his right shoulder injury. An MRI on Monday revealed a sprained shoulder. Hurts’ agent indicated that there’s little concern of a long-term injury to his throwing shoulder. However, it’s uncertain if Hurts suits up against the Cowboys in Week 16.

Gardner Minshew Next Man Up

If Hurts does not play against the Cowboys, backup quarterback Gardner Minshew will start for the Eagles. Minshew became an instant fan favorite at the start of his career with the Jacksonville Jaguars in 2019. He joined the Eagles as a backup last season after Urban Meyer traded him in the preseason. He started two games in 2021 replacing an injured Hurts, and the Eagles were 1-1 in his starts.

Oddsmakers initially opened the Week 16 game with the Cowboys installed a -1.5 favorite at home. The line jumped to -6.5 on the news that Hurts could possibly miss the game.

The Eagles already clinched a playoff spot by winning the NFC East. They’re expected to have the #1 seed in the NFC Playoffs, which comes with a first-round bye.

The Eagles saw their Super Bowl odds dip after they announced Hurts’ injury. They were +400 odds on Monday morning at DraftKings, but were +550 odds later that afternoon.

The Eagles are still the consensus favorite to win the NFC Championship at +190 odds, but the 49ers are right behind them at +250 odds.

Last week, Hurts and Kansas City Chiefs quarterback Patrick Mahomes were in a tight race for MVP. Hurts was the betting favorite at -175 odds ahead of Mahomes at +200. After the shoulder injury, Hurts saw his MVP odds plummet to +600. He’s now fourth on DraftKings’ NFL award board.

Mahomes is the new consensus favorite to win MVP at -350 odds. Josh Allen from the Buffalo Bills and Joe Burrow from the Cincinnati Bengals are co-favorites to win the MVP at +550 odds.

In 14 games this season, Hurts led the Eagles to the best record in the NFL at 13-1. He completed 67.3% of his passes for 3,471 yards. He tossed 22 touchdowns and just five interceptions.

The dual-threat Hurts has been gashing opponents with his running skills. He rushed 156 times for 747 yards and 13 touchdowns. He’s averaging 4.8 yards per carry this season.

It makes sense if the Eagles rest Hurts this week in order to preserve his health for the postseason. The Eagles play their final road game of the season on Christmas Eve against the Cowboys. They host two home games in Philadelphia against the New Orleans Saints (Week 17) and the New York Giants (Week 18).