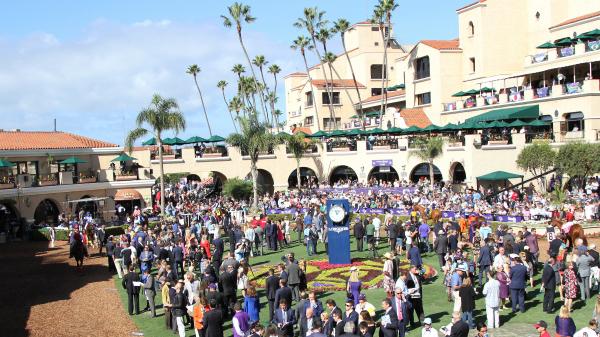 Eight Things You Need to Know About the 2021 Breeders’ Cup

The 38th Breeders’ Cup World Championships are set for Nov. 5-6 at Del Mar in Southern California, and excitement is ramping up to its customary fever pitch. Ever since the late John Gaines’ vision became a reality back in 1984 with the inaugural Breeders’ Cup at Hollywood Park, the event has brought together the leading lights of the horse world to compete in a group of races that offer both money (huge purses) and prestige (influencing the year-end Eclipse Awards in various divisions and also helping boost horses’ value in the breeding shed).

Read on for eight fun facts about the Breeders’ Cup, which will be televised this year by NBC Sports on both NBC and NBCSN.

1. The Breeders’ Cup will make its second stop at Del Mar after first being held there in 2017. When Breeders’ Cup organizers announced that the event would make its debut appearance at Del Mar, racing fans around the world rejoiced as the seaside track is one of the most beautiful in operation and is known for drawing large and enthusiastic crowds. That held true on Nov. 3-4 for the 34th World Championships, as 70,420 fans attended the track and on-site bettors wagered a record $25,181,317 on a competitive series of races that ended with Gun Runner’s win in the Longines Classic. This year, attendance at Del Mar will be capped at a lower level due to the ongoing COVID-19 pandemic, but the Breeders’ Cup still promises to be a spectacular event. Some ticket packages are available: click here to purchase.

2. You can spot a future Triple Crown horse on Future Stars Friday. The best 2-year-old racehorses in training compete on the first day of the World Championships, which has been rebranded as Future Stars Friday in recent years and this year falls on Nov. 5, 2021. These precocious youngsters can develop into 3-year-olds in the next year worthy of competing in the Triple Crown, the most prestigious series of races in North America. Take last year, for example. The winner of last year’s $2 million TVG Breeders’ Cup Juvenile Presented by Thoroughbred Aftercare Alliance, Essential Quality, trained on to win this year’s Belmont Stakes Presented by NYRA Bets. The runner-up in last year’s Breeders’ Cup Juvenile, Hot Rod Charlie, finished second to Essential Quality in the Belmont and also ran third in the Kentucky Derby Presented by Woodford Reserve. And Rombauer, the fifth-place finisher in the 2020 Juvenile, won this year’s Preakness Stakes. Both Essential Quality and Hot Rod Charlie are set to compete in the marquee Breeders’ Cup event, the $6 million Longines Classic, on Nov. 6.

3. The Breeders’ Cup is truly a world-class event. Every year, some of the top horses, owners, trainers, and jockeys travel to the host Breeders’ Cup track from destinations around the globe to compete, especially in the turf races (turf is the preferred racing surface for many racing industries outside of the U.S.). Last year, horses shipping in from Europe won four Breeders’ Cup races at Keeneland, including the $2 million FanDuel Mile Presented by PDJF and the $4 million Longines Turf. In fact, the all-time leading owner by wins at the Breeders’ Cup is a group affiliated with the Ireland-based Coolmore racing and breeding empire. Michael Tabor, Susan Magnier, and Derrick Smith have amassed nine victories. Tabor and Magnier have three more wins together in their own partnership, and Tabor, Magnier, and Smith have two more wins with added partners – one with Americans Jack and Laurie Wolf and another with Anne Marie O’Brien, wife of Coolmore’s trainer Aidan O’Brien.

4. Full fields are the norm at the Breeders’ Cup, which equals much $$$ for winning payouts. Any person who wagers on horse racing will tell you that the more horses that are entered in a particular race, the better for the bettor. Bringing together 10 or more horses to compete in a race usually means that several of them will go off as overlays, meaning they will carry higher odds than they should when the gates open. Betting on an overlay that wins can be quite lucrative and is always enjoyable, and what makes the Breeders’ Cup even more appealing is that practically every horse that’s entered in a race is a high-caliber athlete – most of them, even the longshots, have already won stakes races. Of the 14 Breeders’ Cup races, all of them but one (the Longines Distaff for fillies and mares on dirt) average more than 10 starters (the Distaff averages nine). As a result, all of the Breeders’ Cup races save the Juvenile Turf Sprint have had winners that on average pay more than $10 for a $2 bet. Nine of the races have winners that on average pay more than $20! (For a look back at the top upsets in Breeders’ Cup history, click here.)

6. Want to watch thrilling results? You came to the right place. Twenty-two times, a Breeders’ Cup races has been decided by the slimmest margin recorded on a race chart: a nose. Five times, that’s happened in the Longines Classic, the final and richest race of the World Championships (most recently in 2014 when Bayern nipped Toast of New York). Four times it’s happened in the top race for females, the Longines Distaff (most recently in 2016 when Beholder and Songbird matched up in a showdown of superstars, with Beholder winning). And once, two horses finished first on even terms – known as a dead heat – in a Breeders’ Cup race. That happened in 2003 when High Chaparral and Johar hit the finish line in tandem with no separation noticeable in the track photo. The 2003 Turf is on the short list of the most exciting races of all time for many racing fans. Click here for a look back at that fantastic finish.

7. Twenty-two Breeders’ Cup winners have come back for more, and got it. A true mark of championship caliber is sustaining peak achievement over a period of time, and some of the best horses over the past 30-plus years have done just that to pick up more than one Breeders’ Cup victory. They include Wise Dan, the two-time Horse of the Year who won the Breeders’ Cup Mile back-to-back in 2012 and 2013, Tiznow, the only horse to win the Breeders’ Cup Classic twice in 2000 and 2001, and “Queen” Zenyatta, who won the Distaff (then called the Ladies’ Classic) in 2008 and then the Classic in 2009. High Chaparral, discussed above, notched a repeat win in the Turf with his dead-heat victory in 2003 after winning that race outright in 2002. Only two horses have won three Breeders’ Cup races: one of them a Hall of Famer, the other certain to be. European superstar Goldikova won the Breeders’ Cup Mile three straight years – in 2008, 2009, and 2010 – and was foiled in her bid for a four-peat in 2011 when she finished third (she was enshrined in the Hall of Fame in 2017). Beholder, one of this century’s best, won the Breeders’ Cup Juvenile Fillies in 2012, the Distaff in 2013, and then after three years concluded her career with a heart-pounding nose win over Songbird in the 2016 Distaff.

8. There’s much more to the Breeders’ Cup than just racing. The World Championships, like the Kentucky Derby, Preakness, and Belmont Stakes, bring together fans of horse racing to celebrate everything about the sport and its lifestyle, and a great thing about the Breeders’ Cup is that it rotates to different venues every year, which lets fans enjoy the unique culture of the surrounding area. This year’s host track, Del Mar, is right next to the Pacific Ocean, offering a truly breathtaking setting, and Del Mar is within an hour’s drive to greater San Diego and everything SoCal has to offer. Leading up to the races on Nov. 5-6, Del Mar is hosting a number of events ranging from Breakfast at Breeders’ Cup to the Fashionable Fillies gala and a Welcome Party. Click here for more information.