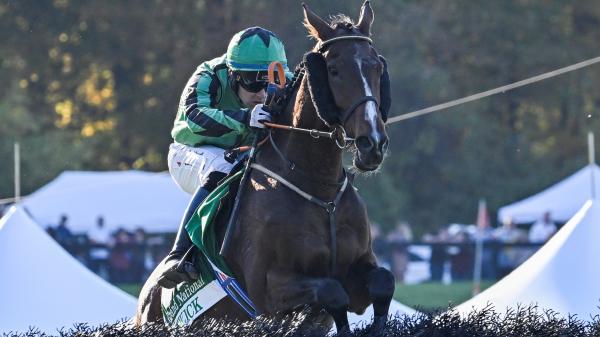 Above all things, the 101st Far Hills Race Meeting was another celebration for all involved that produced  a wealth of smiles.

Yet the featured race of the Oct. 15 card, the $250,000 Grand National Hurdle, generated a much different emotion than the joy seen in all corners of the racetrack throughout the day.

There were tears welling in the eyes of Irish trainer John “Shark” Hanlon and his emotions poured out after T.J. McDonald’s Hewick captured the Grade 1 steeplechase stakes by a widening 11 ½ lengths.

After loudly cheering his horse’s decisive victory in America’s premier steeplechase race, as Hanlon savored the moment, his heart filled with thoughts back home in Ireland of 13-year-old Jack De Bromhead, a who tragically died last month during a fall in a pony race organized by Hanlon.

“This one is for Jack, a great young lad,” Hanlon said. “This is such a big, emotional day. I never dreamed it could happen. It means so much to all of us.”

The Grand National was the main event of the ultra-festive day of steeplechase racing in New Jersey, mixed with one new flat stakes, that brought a crowd estimated at 25-30,000 to Far Hills for a day of racing that unfolded like a grand festival for the fans who spent the day merrily eating, drinking, and chatting with family and friends in between races.

“It’s unreal here,” Hanlon said. “We were very well looked after. They put on a great show that is something special.”

Hewick was rather special himself. Though the United States’ Snap Decision was the 6-5 favorite, Hewick, a 7-year-old Virtual gelding who was the 2-1 second choice in a field of nine, lived up to his reputation as a top European jumper. Already a two-time stakes winner overseas in 2022, Hewick and jockey Jordan Gainford flawlessly circled the Far Hills course to cover the 2 5/8-mile distance in 5:11.60 over yielding turf.

“I’ve never had a horse anywhere near as good this one,” Hanlon said. “For a trainer like me with a small yard, he’s brilliant.”

Noah and the Ark was a distant second, followed by Ask Paddington in the field of nine that saw one jumper leave the course and another fall but walk off. Snap Decision never fired and finished sixth.

The new addition to the day was the $100,000 John Forbes Memorial Stakes, a two-mile flat race on turf honoring the memory of the late trainer who was a highly respected and influential figure in New Jersey racing.

Trainer Keri Brion, who won the Harry E. Ellis jump stakes with Ljay to start the day, sent out the favorite in Three Diamonds Farm’s Cross Border, a $1.1 million earner, but he finished third and she landed in the winner’s circle with Agitare, who was making his United States debut.

The 5-year-old son of Teofilo, owned by Molly and Paul Willis, CFC Stables, Danny and Sheila Kelly, and LS Racing, had been racing in marathon races for trainer James Bolger in Ireland before arriving at Brion’s barn.

“I got him two months ago from Jim Bolger and they thought very highly of him,” said Brion, whose horse won by 4 ¾ lengths in a time of 3:36. “I knew he would love the track. We go slower here and an Irish horse is used to these conditions. It’s great they had this race and it’s fabulous they had it. It was good show.”

Agitare was ridden by Bernard Dalton, a steeplechase jockey who regularly rides at weights of 140 pounds or more and that may have played a big role in the outcome of a race in which all 14 starters carried at least 140 pounds.

After tracking the pacesetting Basso for much of the race, in the stretch Agitare, who was toting 144 pounds, went by the tiring Basso, who was carrying 140 pounds including jockey Nik Juarez, who rides at flat tracks at weights of less than 120 pounds. As a result there was a considerable difference in the amount of lead weight carried by the victorious Agitare and Basso, who settled for second.

“All that weight is a lot to carry for two miles with a smaller jockey,” Brion said. “A race like this, with the distance and weight, is better suited for a steeplechase jockey.”

Another difference between the John Forbes and the steeplechase races was that the jockeys in the flat race could use their riding crops in accordance with Horseracing Integrity and Safety Authority rules limiting the strikes. Since HISA currently has no jurisdiction over steeplechase racing, in the jump races jockeys had to follow the pre-HISA New Jersey regulations allowing jockeys to use their crop only as a safety measure.

It was a rewarding afternoon for horsemen with a combined $625,000 in purse money on the line in the seven races – yet the day, like a typical steeplechase meet, involved much more than what happened on the yielding turf course.

It was a rollicking daylong party with a legion of devoted fans who year-after-year travel to Far Hills to meet with large groups of friends with the common goal of eat, drink, and be merry as a collection of the best steeplechase jumpers circled the course around them.

“It’s like a Breeders’ Cup day, except in a much prettier setting,” said Richard Migliore, an analyst for the “America’s Day at the Races” show on FOX Sports that aired the Far Hills races. “The atmosphere is just as electric as if you are walking into Churchill Downs on Kentucky Derby day. I feel privileged to be here. Everyone is very enthusiastic about it. There’s a lot of partying.”

In some ways, the one-day Far Hills Race Meeting has vestiges of Saratoga Race Course. Approaching the course, you’ll see residents waving cars into their lawns for a $20 parking fee, just as they do at the Spa.

Like Saratoga, fans also arrive early in the morning to secure their spots for the day or begin the meticulous task of assembling some high-end picnicking and tailgating.

While the scene at the Saratoga backyard usually mirrors a family barbeque-without the grills-at Far Hills you will see elaborate and merry tailgating on a prodigious level that puts to shame the scene in the parking lot of an NFL or college football game. With no grandstand, the grounds are jammed with people who tailgate from their cars or bring collapsible tables and chairs for lounging and dining.

For fans like Mike Rubin, of Califon, N.J., the afternoon of racing at Far Hills is circled on the calendar each year, and plans for his tailgating extravaganza are formulated months in advance.

“We love it. We would never miss it. We would cancel any event that was scheduled to be here,” Rubin said. “ It’s a day we look forward to every year. This is our 30th year here. Even when they did not have the event (in 2020) due to COVID, we had a day at our home. So we’ve never missed a year.”

With 32 family and friends joining him for the day of racing, Rubin had two trackside parking spots for the day. One for a lavishly displayed array of adult beverages and food that included Moroccan salmon, filet mignon, shrimp cocktail, and Mandarin salad.

“I think we have found a growing niche. A silver lining in the last two years is that a lot of new fans and flat owners have embraced steeplechase racing. The horse inventory and number of owners has grown, Our race meets have been sellouts. The crowds are back,” Griffin said. “This is our biggest day, but the scene is duplicated at 32 steeplechase venues up and down the East Coast with the crowd enjoying the day. The best part is that these meets benefits charities with the profits going somewhere useful. There’s a great model of philanthropy and community involvement.”

Without question, the local Far Hills charities that have benefitted to the tune of $20 million over the course of the previous 100 meets will see a rise in that impressive figure after Saturday’s jammed event.

“This is fabulous, bringing it all together,” said Guy Torsilieri, chairman of the Far Hill Race Meeting for about 25 years. “The money we raised for charity, the great steeplechase races, the flat race we added. It doesn’t get any better than that.”