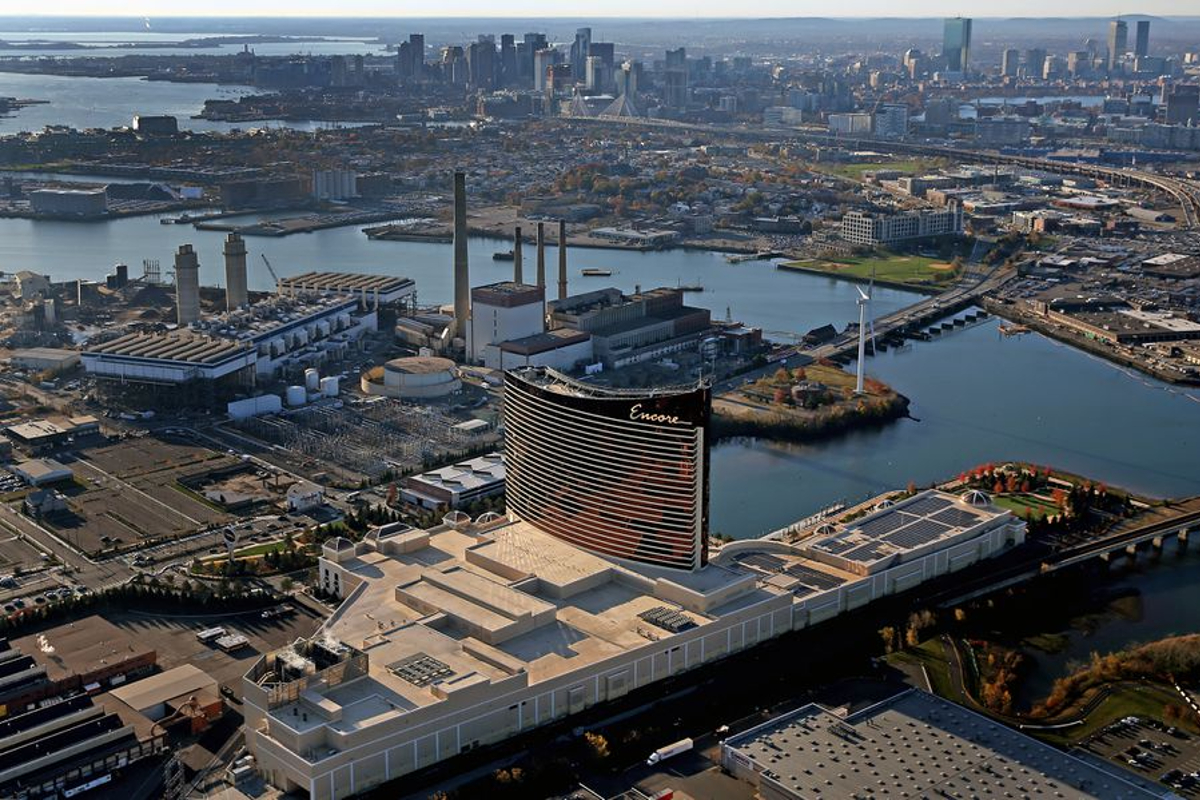 Encore Boston Harbor is spurring economic activity in its immediate surrounding area in Everett across the Mystic River from the downtown capital city. The latest rumblings suggest a new Major League Soccer stadium could be coming near the $2.6 billion integrated resort.

The power plant just south of Encore Boston Harbor could become the site of an MLS soccer stadium. The plant’s owner, Constellation Energy, says it is willing to sell the site for the right price. (Image: The Boston Globe)

Billionaire Robert Kraft, the owner of the NFL New England Patriots and MLS New England Revolution, has for many years been scouting a location to build a from-the-ground-up professional soccer stadium in the Boston region. His Revolution has played its home games in Gillette Stadium, which is primarily the Patriots’ home, since 2002.

Kraft, worth an estimated $8.3 billion by Forbes, says the nearly 66,000-seat NFL stadium is far too large for MLS games. Revolution games average about 15,000 fans per home match.

After years of searching without success, Kraft believes he’s found an ideal setting for his MLS venue. The 43-acre property is located adjacent to the Wynn Resorts casino at 173 Alford Street.

Massachusetts lawmakers last week quietly slid a provision into a larger economic development omnibus that seemingly clears the way for Kraft’s MLS project to come to light across from Encore Boston Harbor.

The Boston Globe reports that the Massachusetts House of Representatives passed a legislative package that includes an amendment that removes environmental protections from 173 Alford. The provision releases the property, which is currently a power plant owned by Constellation Energy, from being used only as part of a port area with maritime applications.

The economic development amendment additionally exempts the property from environmental protections. These include “height, setback, open space, or other dimensional limitations and requirements.”

Wynn Resorts did not immediately respond for comment regarding the possibility of an MLS stadium coming near its casino. The Kraft Group also declined comment.

Environmentalists, however, did not hold back.

This is exactly the kind of backroom, dead-of-night legislative mischief that breeds mistrust in government,” Brad Campbell, president of the Conservation Law Foundation, opined to The Boston Globe.

Campbell went on to say that if there’s a sensible justification for allowing a major sports development to be built on the banks of the Mystic, the developers should present their case and allow the public to weigh in.

“There is a process … for changing the boundaries of designated port areas,” Campbell continued. “If there’s justification for doing it, let them subject their proposal to the test of that process rather than cutting a sweetheart deal.”

Major League Soccer isn’t exactly a major handle generator for legal oddsmakers in the US. But an MLS stadium next to Encore Boston would nonetheless be expected to increase interest in the sport in the area.

Last month, a special joint committee was formed after the Massachusetts House and Senate remained at odds on how to best legalize sports gambling in the commonwealth. The clock is ticking on the committee reaching common ground, as the legislature is set to adjourn for 2022 at the end of the month.