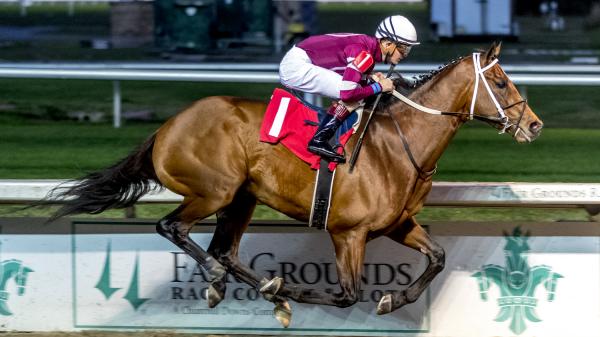 On Dec. 26 in New Orleans, Epicenter took strides toward a potentially bright future for Winchell Thoroughbreds and Asmussen with an authoritative 6 1/2-length victory in the inaugural $100,000 Gun Runner Stakes, earning 10 points on the Road to the Kentucky Derby Presented by Woodford Reserve along the 1 1/16-mile way.

“To be able to win the inaugural running of the Gun Runner today is special for us,” assistant trainer Scott Blasi said. “Gun Runner had his start and a number of breakout performances here at the Fair Grounds, and to see what he has done in the stallion barn has been historical. He’s the leading 2-year-old stallion in the world. To be able to win this race for the Winchell family is very special.”

Sent off as the 2.90-1 second choice despite morning-line favoritism, Epicenter broke alertly from post position one under Brian Hernandez Jr. He settled just off the flank of the pacesetting Surfer Dude through even early fractions of :24.41 and :47.76. Still in hand entering the turn, the 2-year-old son of Not This Time took over right at the quarter pole, and extended his margin of victory to the wire. Tejano Twist, who made a run at the leader at the three-sixteenths pole, evened out a bit late, while remaining two lengths clear of the pacesetting Surfer Dude, who completed the trifecta.

A bit rank early, favored Rocket Dawg finished a distant sixth as Epicenter stopped the clock in 1:44.19 on a fast track.

“I walked down in the paddock and Scott told me how much they liked him,” said Hernandez, who won three on the day. “I remember watching (Epicenter) run at Churchill. Same sort of scenario as today. I was actually on Surfer Dude (that day) and he was outside me. Going into the turn you could tell he traveled so good and he was much the best that day. Going off of that race, he looked like he had a lot of ability and he showed it today.

“Any time you get a horse that has tactical speed, especially here, that helps a lot. That’s the nice thing about him, you know, for only his third race, he put himself in position and all I had to do was be a quiet passenger and let him do his thing.”

A tired sixth Sept. 18 on debut going seven furlongs at Churchill Downs, Epicenter bounced back with a huge performance over a one-turn mile seven weeks later in his follow-up start, pressing the pace and drawing out to win by 3 1/2 lengths with a huge gallop out on a Louisville strip that was not kind to forward horses on the day.

“We love his tactical speed, his ability to put himself in position to do well and Brian did a great job with him today to let the speed go on, and change sides,” Blasi said. “He’s still lightly raced, still learning, but hopefully there are some big things to come.”

The next Road to the Kentucky Derby race at Fair Grounds is the Jan. 22 Grade 3 Lecomte Stakes.

Trainer Bret Calhoun was pleased with the effort of runner-up Tejano Twist, who was making his two-turn debut in his ninth career start off a victory in the Lively Shively Stakes at Churchill.

“We thought he handled it very well,” Calhoun said “At the end of the day his true calling against better competition might have to be as a closing sprinter. I think he handled that fine. I just don’t really envision him running against top horses at 1 1/4 miles. He handled his first test well, but the horse that beat him had one start and we had our chance off the turn and he drew off from him. I’ll talk to the owner (Tom Durant) and we’ll go from there. Overall, very happy with the horse, ran great. He passed that two-turn test.”

Bred in Kentucky by Westwind Farms, Epicenter was sold to Winchell Thoroughbreds as a yearling for $260,000 at the 2020 Keeneland September Sale. He is out of the stakes-winning Candy Ride mare Silent Candy, who has produced a yearling colt by Always Dreaming and foaled a filly by Tapiture this past spring.

2021-12-28
Previous Post: “In 2021, online gaming was again the vertical that benefited from the general conditions with growing revenues”
Next Post: Teacher Defrauds Non-profits of $240K To Fund Gambling Addiction