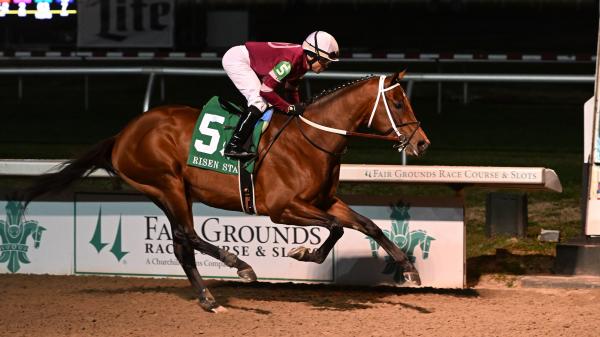 When you’re Thoroughbred racing’s all-time leader in wins, it’s logical that a host of the sport’s major races will be attached to your name.

Yet for trainer Steve Asmussen, who reached the Mount Everest of wins last year and now has 9,637 victories in his Hall of Fame career, there’s one notable omission on his lengthy list of grade 1 triumphs: the Grade 1 Kentucky Derby Presented by Woodford Reserve.

Asmussen has finished second twice in the opening leg of the Triple Crown, and perhaps this might be the year for him to stand in the winner’s circle.

Asmussen’s stock for the Run for the Roses certainly skyrocketed Feb. 19 when Winchell Thoroughbreds’ Epicenter grabbed the early lead and was never headed in posting an easy 2 3/4-length victory over the favored and previously undefeated Smile Happy in the $400,000 Grade 2 Risen Star Stakes Presented by Lamarque Ford for 3-year-olds at Fair Grounds Race Course & Slots.

While soothing the sting of a head loss in last month’s Grade 3 Lecomte Stakes, the victory in the 1 1/8-mile stakes also netted the speedy son of Not This Time 50 qualifying points, which gives him 64 overall and assures him of a spot in the field for the May 7 Kentucky Derby.

“It was a little different than his last race as every fraction was perfect for him,” owner Ron Winchell said. “He was nice and comfortable and you just hope he’ll finish the race, which he did.”

The win was the third in five starts for the colt bred by Westwind Farms in Kentucky out of the Candy Ride mare Silent Candy who sold for $260,000 from the Bettersworth Westwind Farm consignment at the 2020 Keeneland September Yearling Sale. With two of those wins and the second in the Lecomte coming at Fair Grounds, it was no surprise that Winchell said the next stop for Epicenter would be the New Orleans track’s March 26 Grade 2 Twinspires.com Louisiana Derby.

“Never heard of it,” Winchell said about the 1 3/16-mile stakes with a laugh before amending it to the proper, “That’s the plan.”

The Risen Star was the first of seven Kentucky Derby preps offering a total of 85 qualifying points and Epicenter and jockey Joel Rosario wasted little time in latching on to the bulk of them.

They opened a length lead after an opening quarter-mile in :23.79 and extended it to 1 1/2 lengths after six furlongs in 1:12.25. Leaving the quarter pole, Epicenter scooted away from his nine rivals and opened a safe 4 1/2-length margin in mid-stretch before he was geared down in the final sixteenth.

“He ran a big race today,” Rosario said. “He was enjoying what he was doing.”

The sixth foal from his dam, he is her lone stakes winner. She also has a 2-year-old Always Dreaming colt, who was bought for $25,000 by Mike Pender at the 2021 Keeneland September Yearling Sale, and a Tapiture yearling filly.

Smile Happy was the 2-1 favorite off a perfect 2-for-2 record at 2 for trainer Kenny McPeek that included a 3 1/4-length victory in the Grade 2 Kentucky Jockey Club Stakes over Classic Causeway and White Abbario, who won the Grade 3 Sam F. Davis Stakes and Grade 3 Holy Bull Stakes, respectively, in their 3-year-old debuts.

Lucky Seven Stable’s son of Runhappy and jockey Corey Lanerie were seventh after six furlongs before splitting rivals in the stretch and rallying to take second by a half-length over Jeff Drown’s Zandon.

“I was pleased with the race,” McPeek said. “I said if he’s third or better it would be a nice next step. For a mile-and-an-eighth race in the third start of his career and after a layoff (since Nov. 27), it was an excellent run. He caught a little traffic and couldn’t catch the winner, but I loved the gallop out.”

With 20 points from the runner-up finish, Smile Happy now has 30 and that might be enough to run in the Kentucky Derby due to the points on the Triple Crown trail vacated by horses trained by Bob Baffert, who is in the midst of a 2-year suspension at Churchill Downs.

McPeek said he was uncertain of what would be next for Smile Happy, who is second behind Epicenter on the points leaderboard.

“It’s too soon to decide,” McPeek said. “We’ll nominate him to all the logical stakes and go from there.”

Zandon, a son of Upstart making his first start since a troubled second in the Grade 2 Remsen Stakes for trainer Chad Brown, broke in the air at the start and then lost ground while rallying five-wide to take third, a half-length behind Smile Happy. He picked up 10 points for a solid showing given the circumstances and has 14, moving up to fifth in the standings.

Pioneer of Medina, trained by Todd Pletcher, was a head back in fourth and came away with 5 points. For the moment he holds the 20th and final spot in the Run for the Roses, though that figures to change considerably in the next 11 weeks leading up to the first Saturday in May. -Bob Ehalt

Turnerloose showed no problem racing on the dirt surface for the first time as she got up to win the $300,000 Grade 2 Rachel Alexandra Stakes Presented by Fasig-Tipton Feb. 19 at Fair Grounds Race Course & Slots at odds of 17-1.

“To be honest, I didn’t know if she’d handle the dirt,” trainer Brad Cox said. “She worked well enough on it last fall. We gave her a little bit of a break, we brought her back, she worked well enough here at the Fair Grounds. She broke, I thought Florent (Geroux) put her in a great position, and she tries hard. She always tries hard.”

The Nyquist filly was a stakes winner on the turf last year and made her first start since fading to last in the Nov. 5 Grade 1 Breeders’ Cup Juvenile Fillies Turf at Del Mar.

“California wasn’t her thing. She was off her bridle going up the backside and I just think she was a tired filly at that point,” Cox added. “We gave her a break, she regrouped, and I think we saw a better version of her obviously than we saw in California.”

Cox will now aim Ike and Dawn Thrash’s Turnerloose for the May 6 Grade 1 Longines Kentucky Oaks, with prep races in between to be determined. Turnerloose collected 50 qualifying points Saturday on the Road to the Kentucky Oaks, which boosted her to the top of the leaderboard. -Christine Oser