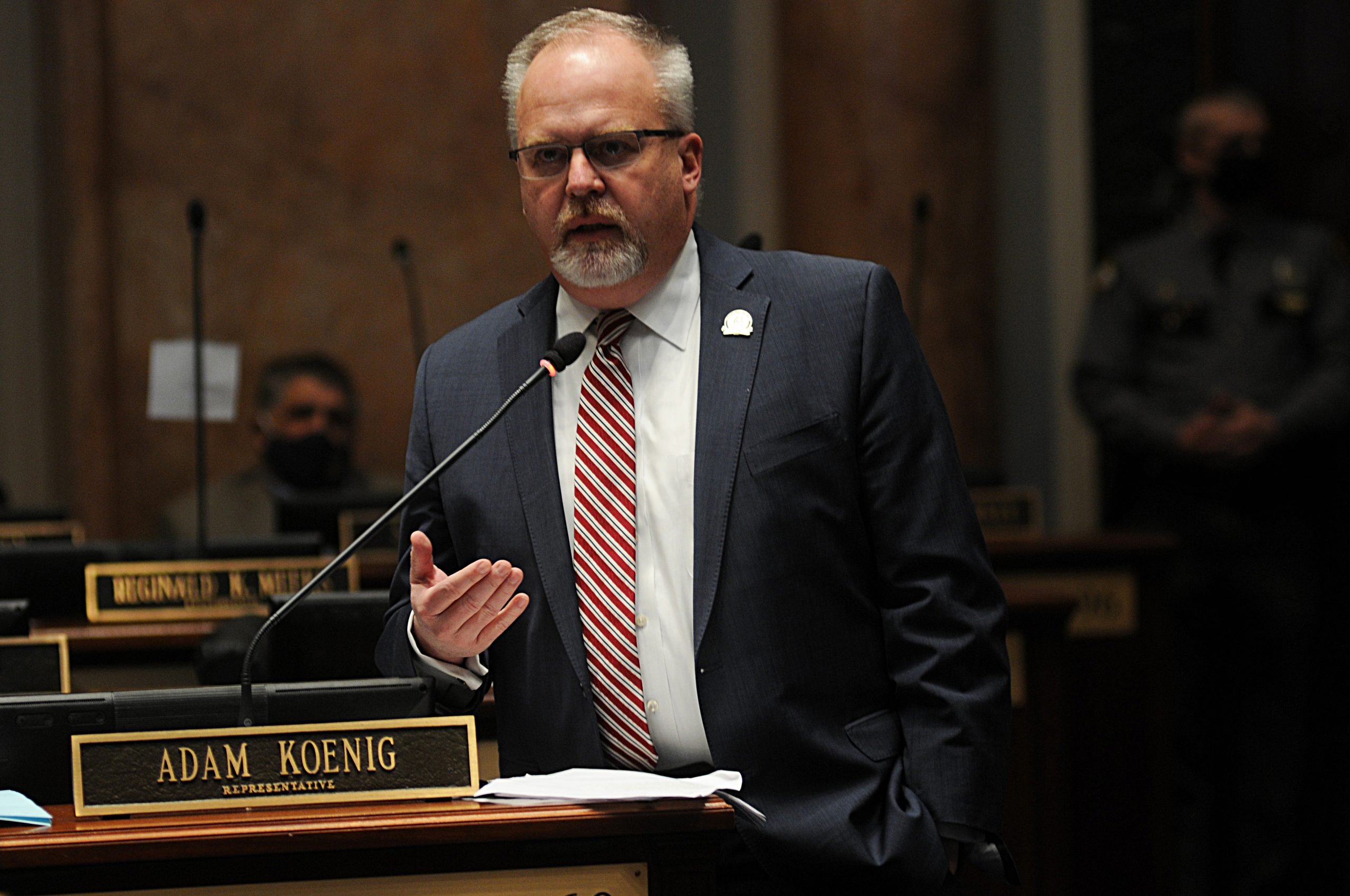 A prominent Kentucky horseman said Thursday he’s worried about the impact state Rep. Adam Koenig’s loss in a primary election earlier this week may have on horse racing in the Bluegrass State.

Kentucky state Rep. Adam Koenig presents Senate Bill 120, which gives the Kentucky Horse Racing Commission the power to approve and regulate historical horse racing machines, in the House during a February 2021 session. Koenig lost his primary election earlier this week, and at least one prominent horseman has concerns about what that might mean for the racing industry moving forward in the state. (Image: LRC Public Information)

He said it was “absolutely concerning” to him that the Erlanger Republican who chairs the House Licensing, Occupations, and Administrative Regulations Committee, fell to attorney and Erlanger City Councilman Steven Doan in a Tuesday GOP primary by less than 200 votes out of 2,548 votes cast. As committee chair, Koenig played a key role in shepherding and passing legislation related to the racing industry, including a 2021 bill that codified the slot machine-like HHR games in the state.

Track owners, including Winchell, have credited HHR with boosting purses for races and improving the quality of racing in the state in recent years.

I thought that was a devastating loss for somebody that’s been a great advocate for racing,” Winchell said. “When you look at Kentucky politics, horse racing should be one of the number one things – it’s an important industry for the state. A lot of times it doesn’t go that way, and so, when you lose a guy like Adam Koenig, it hurts racing overall.”

Earlier this year, Koenig sponsored House Bill 607, a new law that reformed several aspects of the state’s parimutuel wagering industry. HB 607 eliminates breakage, meaning racing bettors will get paid more when they win, and it establishes a uniform 1.5% tax rate on the handle for all parimutuel wagers. That includes bets placed at the track, simulcasting centers, online advance-deposit wagering accounts, and HHR machines.

While the House will appoint a new committee chair when the General Assembly convenes next year, it remains to be seen who that will be and what interest they will have in racing. The committee also oversees a wide array of industries and the regulatory agencies tied to them.

“That’s something that’s very concerning moving forward,” Winchell added. “I think we lack in Kentucky some of the support for racing that I believe it should have. It’s a very important industry, but they don’t usually treat it like that.”

Koenig also served as the point person for sports betting legalization efforts in Kentucky. During this past session, he was finally able to get that bill, House Bill 606, passed out of the House for the first time. However, the bill did not get a committee hearing in the Senate, and it died when lawmakers adjourned for the year last month.

The lawmaker had vowed to continue bringing up the bill until it passed. Chances are strong another Republican legislator will introduce the bill again, probably as soon as next year’s session.

HB 606 received 58 votes, and a few House members who were not on the floor likely would have supported the bill as well. While all 100 seats in the House are up for re-election this November, it’s again likely that a majority would support a sports betting bill.

The question, though, remains whether a bill would get enough support in the Senate to pass.

One of those lawmakers could be Doan, although he would have to first defeat Democrat Chris Brown in November.

On Twitter, the day after Koenig introduced his gaming bills, Doan tweeted that he supported sports betting but felt that more should be offered.

“I’d be just fine with allowing casinos and gambling establishments like Indiana and Ohio,” Doan tweeted in March.

That’s a popular sentiment among Kentuckians. However, efforts to legalize full-fledged casinos in the state have not succeeded

Doan did not oppose Koenig on gambling issues. Instead, he and other candidates challenged Republican incumbents on a “liberty” platform calling, in part, for rollbacks on what they considered government overreach