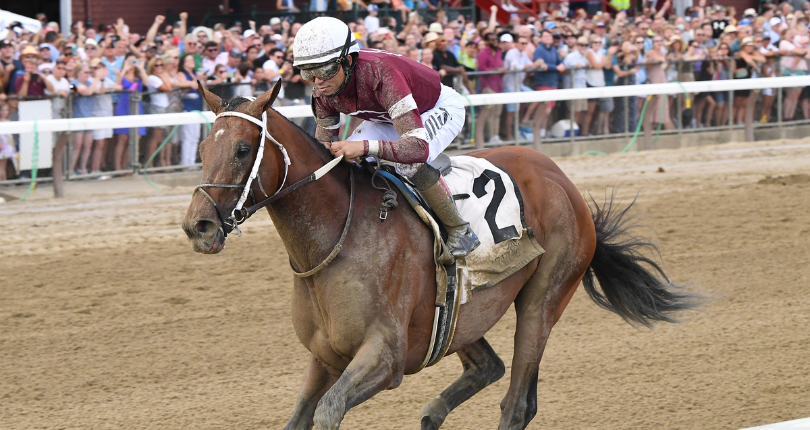 Epicenter the Favorite After Travers Draw, Gets Rematch with Rich Strike

Epicenter goes for his second straight win this weekend in Saturday’s Travers Stakes at Saratoga Race Course in New York, but he’ll also seek a little bit of revenge as well.

Epicenter, with Joel Rosario riding, roars down the stretch to win the Jim Dandy Stakes at Saratoga last month. On Tuesday, the Steve Asmussen-trained colt was installed as the 7-5 morning-line favorite for Saturday’s Travers Stakes at Saratoga. (Image: Chelsea Durand/NYRA Photo)

The Steve Asmussen-trained colt already got some of that. He made up for his narrow loss in the Preakness Stakes to Early Voting, whom he beat a month ago in Saratoga’s Jim Dandy Stakes. Now, he’ll look to take down Rich Strike, who edged Epicenter at the wire in the May 7 Kentucky Derby as an 80-1 shot.

A win Saturday not only would allow Epicenter to avenge his Kentucky Derby heartbreak, but it also would give him his first Grade 1 stakes win.

He’s arguably the best 3-year-old in the division despite not having a Grade 1 win that he needs,” Asmussen said. “We’ve all witnessed his Classic defeats with our mouths agape. But watching that happen in the Derby and the Preakness, we realize how fortunate we have to be.”

The draw for the mile-and-a-quarter race took place Tuesday afternoon. Epicenter, with Joel Rosario aboard, drew the sixth post in a deep field of eight and became the morning-line favorite at 7-5.

Post time for the Travers is 5:44 pm ET. FOX will broadcast the race.

Speaking to the depth and quality of the field, even as Epicenter seeks his first Grade 1 win, the Travers still features four Grade 1 winners. Besides Rich Strike and Early Voting, Zandon won the Blue Grass Stakes at Keeneland in Lexington back in April, and Cyberknife claimed both the Arkansas Derby in April and the Haskell Stakes last month at Monmouth Park in New Jersey.

Asmussen called it “an incredible field” that Epicenter will face Saturday.

“Nothing but respect for some extremely good 3-year-olds, but I think we have the right one,” he said.

Cyberknife, who has scored back-to-back wins in graded stakes after a disappointing 18th place showing in the Kentucky Derby, drew the inside gate and is the second choice on the morning line at 7-2. Florent Geroux gets the mount.

Trainer Brad Cox said going to Saratoga after the Haskell made sense, even though no 3-year-old has won both mid-summer stakes races since 2001. Cyberknife has trained on the Saratoga track three times, and Cox said he’s been happy with the workouts.

“More important is how he’s come out of it,” Cox said. “He looks fantastic, so we’re set up. We’re ready.”

Early Voting also comes into the Travers from the Jim Dandy. He led through the first three-quarters of a mile, but he faded as Epicenter made a big move around the final turn.

Both horses are also trained by Chad Brown, who was arrested last week on a domestic violence charge in Saratoga Springs.

Rich Strike returns to the track for the first time since running sixth in the Belmont. The Derby winner will break from the second gate and has morning line odds of 10-1.

While it’s been 15 years for a Kentucky Derby winner also to claim the Travers, trainer Eric Reed said he’s been pleased with the way his colt has taken to the Saratoga track.

“He skipped across the track,” Reed said. “Now, we just have to get a trip and see if he can do what he did all year, and that’s finish strong.”

Starting near the rail may help Rich Strike’s chances, but he and Sonny Leon will likely need someone to set a blistering pace early on if he wants to back up his monumental upset with another win.

Can Artorius Break Through?

The remaining horses in the field don’t have the recognition of the graded stakes winners, but oddsmakers at Saratoga do like one of those horses.

Artorius, another Brown-trained colt, will make his graded stakes debut Saturday. He’s only raced three times, but he’s won twice since June. On July 29, he scored a four-and-three-quarter length win in the Curlin Stakes at Saratoga. He rallied from off the pace to take the lead coming off the final turn and pulled away.

With Irad Ortiz Jr. as his jockey, Artorius drew the fifth post. Artorius is the third choice on the morning line at 9-2.

Ain’t Life Grand also makes his graded stakes debut and gets jockey Tyler Gafflione for the first time. The colt trained by Kelly Von Hemel has five wins in eight career starts, and all of those wins have come in seven starts at Iowa’s Praire Meadows.

Ain’t Life Grand enters the Travers looking for his third straight win. He drew the third gate, and oddsmakers gave him morning line odds of 20-1.

Gilded Age, trained by Bill Mott, has two wins in eight starts. He also finished second to Artorius in his last start, the Curlin Stakes. Junior Alvarado gets the call, and they’ll break from the fourth post, as Gilded Age has 30-1 morning line odds.