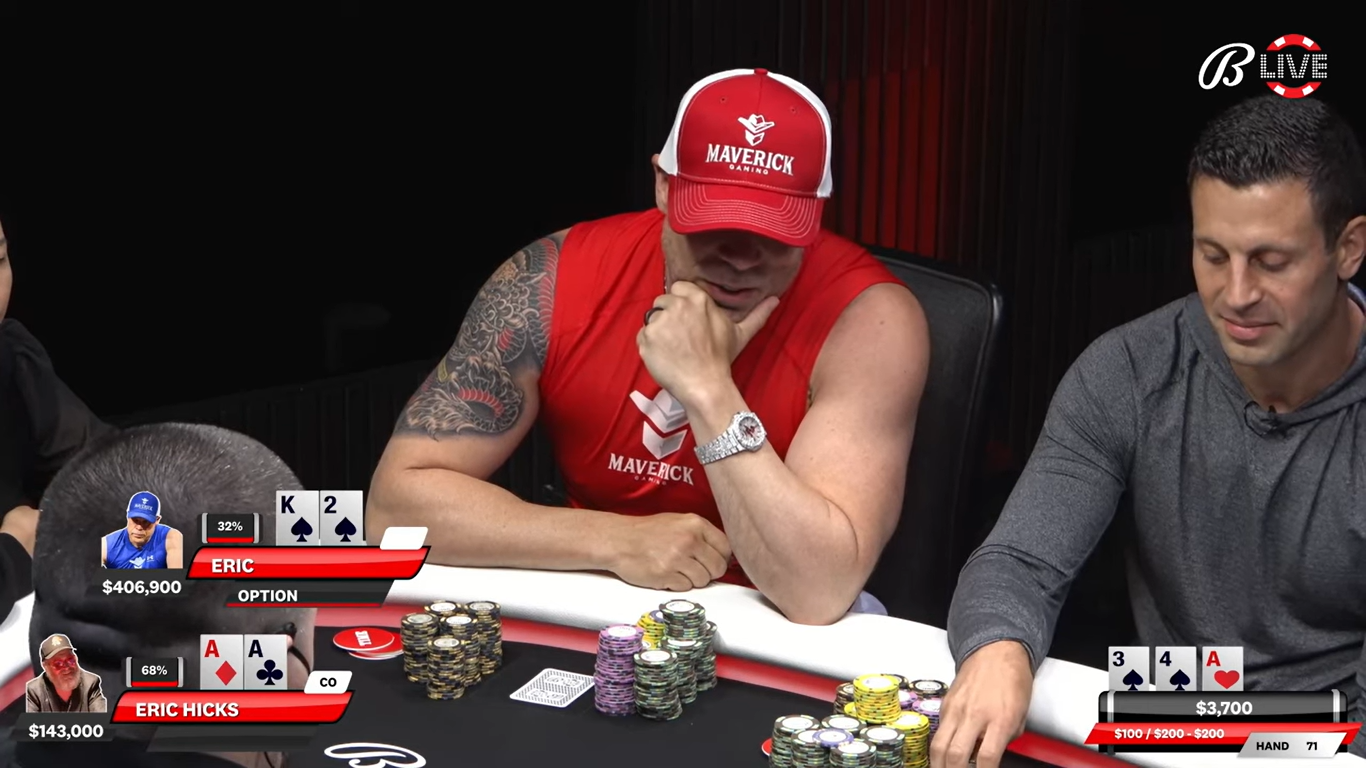 One day after torching off $600,000 on Hustler Casino Live, Eric Persson took one on the chin in the form of a brutal $290,000 cooler against Eric Hicks on Live at the Bike.

On Thursday, Persson exited the game following a failed bluff in a $478,000 pot against the loose Alan Keating. The following day, he didn’t bluff off a stack, but instead ran into a difficult and costly situation.

The final Phil Hellmuth Week show on Live at the Bike brought out more than double the audience of the first two nights, thanks in large part to the lineup, which included Los Angeles high-stakes legend Garrett Adelstein, Phil Hellmuth, Persson, and Poker Hall of Famer Eli Elezra.

According to our sources within LATB, the Friday show reached 5,000 average concurrent viewers between YouTube, Facebook, and Twitch. Those tuned in were treated to many exciting hands during the five-hour session, but none more entertaining than a hand played between Hicks and Persson.

Sometimes You Don’t Want to Hit Your Draw

Hitting a flush draw, especially a king-high one, on the turn is quite a pleasant feeling for any poker player. Well, not always. Take, for example, the following hand in which Persson’s joy upon hitting his draw turned quickly to sorrow.

, Hicks, a regular on LATB, raised it up from the cut-off to $1,100 and Persson, in the big blind, called with

and well behind. The flop of

smacked both players in the face hard — Persson a flush and straight draw, and top set for his opponent.

“Oh, Eric, this is going to be on YouTube, my friend,” Persson accurately predicted as he pondered his next move. “There’s no f*****g way you can get off this hand.”

Persson, owner of Maverick Gaming casinos, opted to lead out for $3,100, an unconventional play in today’s poker world. Hicks, sitting pretty with a set of aces, raised to $10,000 and received a call.

, was the ultimate action card. Although it gave Hicks quad aces, Persson actually wasn’t drawing dead as he still had a one-outer to a straight flush. Unfortunately, for everyone at the table, there wasn’t a bad beat jackpot in play.

With action first on Persson, Hellmuth’s newest rival, the tank-top wearing, trash-talking casino owner who hit his flush bet out again, this time for $31,000, more than the size of the pot. Hicks, with no reason to scare off his opponent, gave it the old big-hand sigh before making the call.

The river was a meaningless

and Persson snap-shoved all in for Hicks’ remaining $102,000. Hicks wasted no time making the call.

“Do you have a full house?” Persson asked.