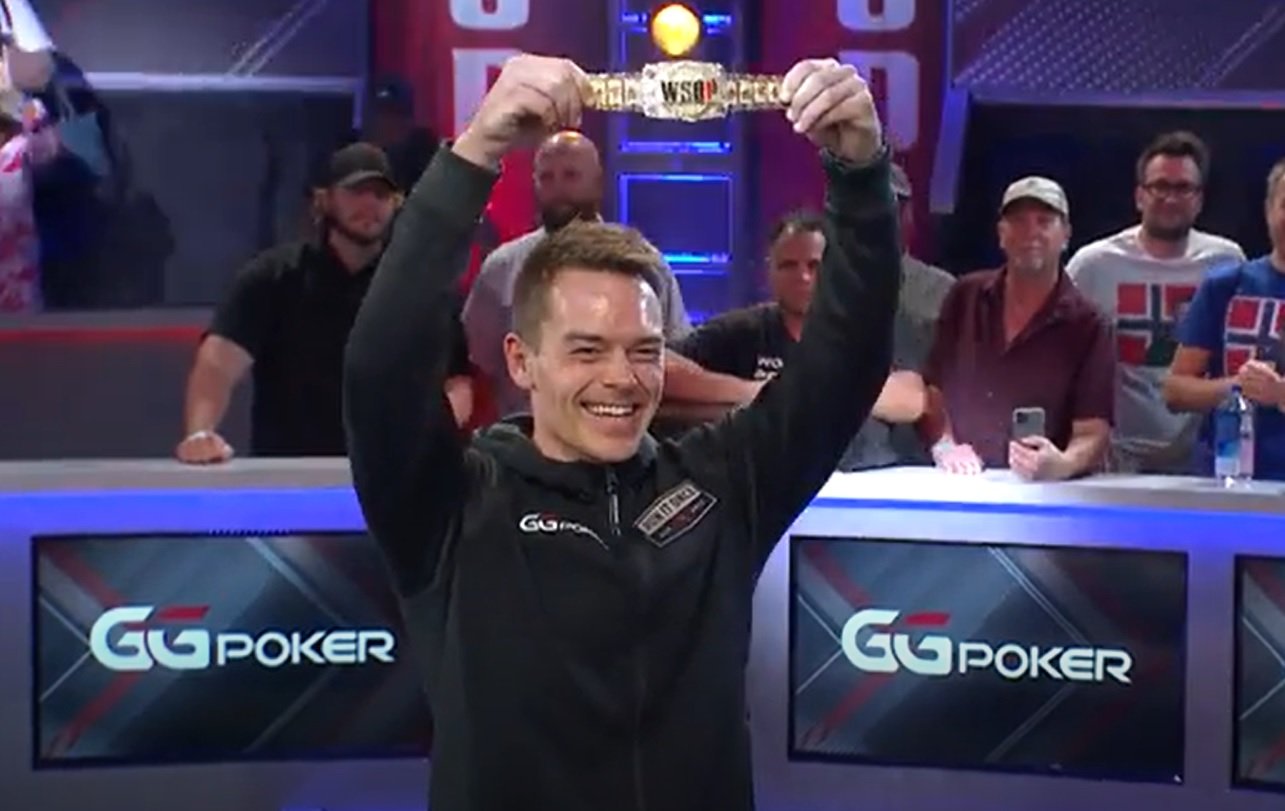 Norwegian Espen Jorstad won the 53rd World Series of Poker (WSOP) Main Event on Saturday, July 16, marking the first victory for both Jorstad and Norway in poker’s most prestigious game.

It was the feather in a remarkable WSOP for Jorstad, who won the $1,000 Tag Team No -limit Hold’em event just two weeks ago alongside teammate Patrick Leonard. (This made him this year’s only Main Event final table entrant with a previous gold bracelet.)

Jorstad played with sunglasses and without expression against Attenborough, who visibly and audibly agonized several times — at one point for more than 18 minutes — over whether his opponent was bluffing or had cards. (His fatal mistake was guessing that his pair of 4s beat whatever Jorstad was holding, which turned out to be a set of 2s.)

In an unprecedented situation, 17 grueling hours of play ensued until tournament officials finally mercy-killed the play at 6 a.m. local time Thursday, leaving ten still standing instead of the traditional nine. (The “official” final table began with the elimination of Brooklyn-born Las Vegas resident Asher Conniff, who walked away with $675,000 for finishing 10th.)

Jorstad dominated the 11 hours of play that began at 2 p.m. Friday, which ended in his scoring back-to-back knockouts against Matija Dobric, the first Croatian to make the Main Event final table, and England’s John Eames. (Dobric won $2.25 million for finishing fifth, Eames $3 million for fourth.)

Fold Heard Round the World

In addition to Jorstad’s win, this year’s WSOP will be remembered as the first series held at Bally’s after 17 consecutive years at the Rio. (From its inception in 1970 until 2004, it was held at Binion’s Horseshoe.)

It will also go down in poker history for what might as well be called the fold heard around the world. The beyond-difficult but ultimately correct decision was made on Day 6 of the Main Event by David Diaz of Houston against Jeffrey Farnes of Oregon with 14 players left.

For six excruciating minutes, Diaz agonized, nearly calling at one point before Farnes asked for the clock to be put on him, giving him 30 seconds to act. When Diaz finally laid his hand down, the groaning audience felt his pain. Diaz left 11.8 million chips behind but was able to finish 13th and take home $525,000. (Still not a bad day at the office.)

Two players accused of online cheating, Ali Imsirovic and Jake Schindler, were eliminated on Day 2. (Neither has responded to the allegations, which were leveled earlier this year.)

Phil Hellmuth, holder of a record 16 WSOP bracelets, continued his annual tradition of turning up late to the Main Event dressed in an absurd outfit. This year, it was Darth Vader. However, the force was not with him, as he busted within an hour.

The last woman standing was Efthymia Litsou, whose impressive run took her to 18th place.