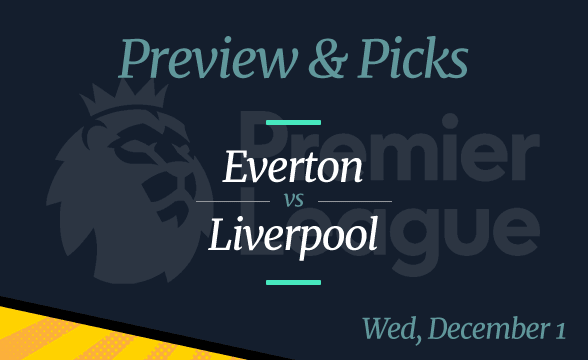 The first Merseyside Derby of the 2021-22 season is on the program on Wednesday when Everton will welcome Liverpool at Goodison Park. The two local rivals will meet for the 239th time, some 125 years after their first-ever meeting.

Liverpool leads the all-time series 95-76-69, but the Reds are without a win in the previous three Merseyside Derbies. Further, they’re without a win on Everton’s turf since 2016. Still, oddsmakers think Liverpool will end the disappointing series. They see Jurgen Klopp’s boys as a strong favorite ahead of the game.

All odds are per FanDuel as of November 29.

The Toffees started their 2021-22 campaign in top gear. Rafa Benitez’s team was without a defeat for the first couple of weeks, but then everything went downhill. Their last win happened on September 25, when they beat Norwich 2-0 at home. Since then, we saw the Toffees losing five and drawing two Premier League games.

As a result, they’re now in 14th place, which is way too embarrassing for a team with such a strong roster as Everton. This team has plenty of amazing players in literally all positions. The trouble is that many of them have been struggling with fitness this season.

Ahead of the Everton vs Liverpool game, the Toffees have at least three players listed as injured, namely, Dominic Calvert-Lewin, Andre Gomes and Tom Davies. The good news, however, is that their best player, Brazilian forward Richarlison, is back after missing one game due to yellow cards.

Liverpool Dreaming of the Title

Liverpool has lost only one game since April, which shows how impressive this team has been. Their only Premier League loss happened on November 7, when they lost to West Ham in London. The final score was 3-2 in the Hammers’ favor, although the Reds were the better team.

They had significantly more goal chances, a higher ball possession, and so on. On top of everything, one of West Ham’s goals was actually an own goal by the Liverpool goalie.

As if they needed to prove to the world the loss was nothing but a glitch, Liverpool then went and destroyed Arsenal 4-0 at home. In the next game, they beat Porto 2-0 before finally beating Southampton 4-0 last Saturday.

Their form is superb, but their players might feel tired due to their busy schedule. Apart from having to play four games in the space of ten days, the Reds also have problems with injuries. On the bright side, their bench is long and they have plenty of subs to choose from. Still, they will need to work hard physically if they want to get anything from this game.

That said, we probably aren’t going to see Liverpool destroying their city rivals. Instead, a modest 1-0 or 2-0 for the Reds seems like the most likely outcome.

Picks: Liverpool to win; under 2.5 goals.