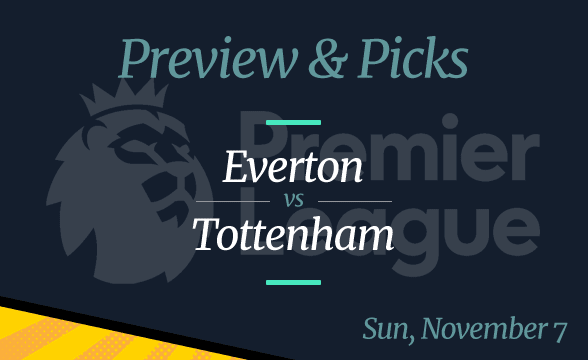 The Spurs got a brand-new boss! Antonio Conte was appointed their manager following the sacking of Nuno Espirito Santo after the 3-0 loss to Manchester United last weekend. The Italian manager started his Tottenham career with a 3-2 home win in the Europa Conference League against Vitesse.

A much tougher challenge awaits him and his new team on Sunday when they travel to North England to take on Everton. Sure, the Toffees have been in dreadful form with three straight losses in the Premier League, but they surely have a very good roster.

Anything can happen in this game, but just one thing is a certainty – Premier League fans are in for a real treat!

Odds taken from DraftKings on November 5, 2021

The Toffees’ arguably best player, Brazilian forward Richarlison, is back after an injury that kept him sidelined for a couple of weeks. He did make his comeback two rounds ago but didn’t do much on the pitch, the reason being that he probably wasn’t 100% fit.

The good news is that Everton’s most expensive player seems to have no fitness concerns ahead of Sunday’s clash with Tottenham. The bad news is that there are a couple of others that do have fitness problems.

In fact, there are at least five Everton players who are struggling with an injury. The Toffees’ no. 9, Dominic Calver-Lewin, is one of them, together with Abdoulaye Doucoure, who’s been Everton’s top assist-maker in the 2021-22 Premier League.

Nevertheless, even without those guys on the field, Everton surely has plenty of power to put up a good fight against Tottenham. The question is will that be enough for a point or even all three? It doesn’t depend only on them but on the Spurs as well.

The Spurs seemed lethargic throughout the season, with Santo as their boss. Now that Conte is in charge, such things won’t be allowed. The man who led Chelsea to the Premier League title a few years ago is famous for his passionate approach to the game.

Not only is he passionate about it, but he also seems to have the power to transfer his passion onto the players. That seems to be exactly what the Spurs need. They have plenty of talent on the roster, but their players don’t seem very motivated. At least, they didn’t seem with Santo at the helm.

This goes especially for the Tottenham captain Harry Kane, who’s been completely out of form this season. The man who was the top-scorer in the Premier League last season now has only one goal to his name in this competition, despite playing nine games already.

Rumor has it that the reason behind his anemic performances is that he wanted to leave for Manchester City last summer. The Spurs didn’t let him, which made him disillusioned, affecting his performances on the pitch. Luckily for the Spurs, if there’s a man who can bring Harry Kane back to his former glory, it’s Antonio Conte.

Pick: Tottenham to win; over 2.5 goals

2021-11-06
Previous Post: Safer Gambling Week 2021 • This Week in Gambling
Next Post: Golden Pal Out Of Gate Like A Rocket, Runs Away With Turf Sprint – Horse Racing News